What to expect from Irrfan Khan in 2018 – Birthday special


With five films in the pipeline, it seems the actor will have a busy 2018. On his 51st birthday today (7 January), a look at what lies ahead for the talented actor in the new year.

In 2017, actor Irrfan Khan delighted audiences yet again with two effortless performances in Hindi Medium and Qarib Qarib Singlle. He picked up the Best Actor trophy at the Star Screen Awards for his portrayal of the roguish Yogi and is likely to be nominated for many more.

In Cinestaan.com's reflections for the year, he came in second on the list of best actors of 2017, close behind Rajkummar Rao.

This year, the very busy actor has five releases to look forward to. With festival films and quirky comedies, Irrfan Khan is set to carry his 2017 success forward into 2018.

Khan shot for his international project, Puzzle, last June, after Hindi Medium (2017) was released. Directed by Marc Turtletaub, the 103 minute American film will have its world premiere on 23 January at the Sundance Film Festival in Utah.

Actress Kelly Macdonald plays a housewife who discovers her hidden skill for puzzles, while Irrfan Khan plays Robert, “a fellow maverick who introduces her to an unexpected world of puzzle competitions”.

Macdonald, an award-winning Scottish actress, is, like Khan, known for choosing unique roles. It would be nothing short of a joyride to watch the two on screen together. 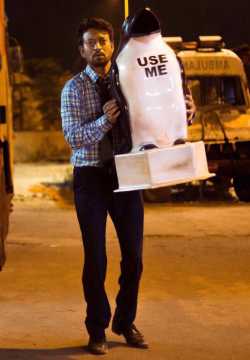 Back in Hindi cinema, Irrfan Khan has another new pairing, this time with actress Kirti Kulhari. The duo play husband and wife in Abhinay Deo’s quirky comedy Blackmail, along with Arunoday Singh and Divya Dutta.

The story reportedly deals with a man finding out about his wife’s infidelity. After bringing the laughs with Hindi Medium and Qarib Qarib Singlle, Khan is looking to complete a hat-trick with Blackmail. The film is due to be released on 30 March 2018.

The Song Of Scorpions 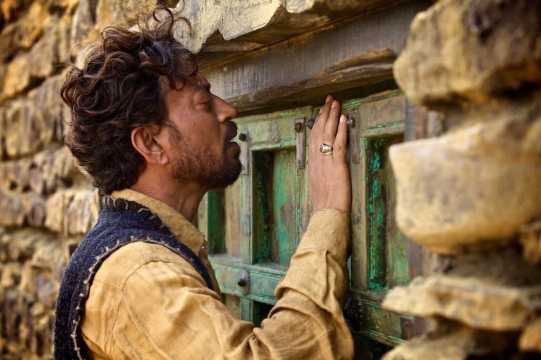 Khan has already worked with filmmaker Anup Singh in the critically acclaimed Qissa (2015). In their second collaboration, Singh has cast Khan as Aadam, a camel trader who falls for Iranian actress Golshifteh Farahani's Nooran.

She is a scorpion singer who can reverse the insect's poison and thus save those who are stung. Hindi screen legend Waheeda Rehman also has a small role in the film. The Song Of Scorpions is currently in the festival circuit, having already been screened at Locarno, Mumbai and Dubai.

Official film wrap celebration tha, how could I not have dragged these two into a selfie?
Thank you for being awesome, you two! #Karwaan pic.twitter.com/W2JOuC5W8T

Malayalam star Dulquer Salmaan and Marathi actress Mithila Palkar make their Hindi film debut in producer Ronnie Screwvala’s Karwaan. Both rising stars have quite the fan following and Khan will be their guide in the light-hearted comedy.

Karwaan is directed by Akash Khurana and judging by the big smiles on the faces of the three leads in the picture, it looks like the film’s sets must have been a blast. The release date for the film has not been finalized yet, but it is expected to hit the screens in the second half of the year.

Deepika Padukone and Irrfan Khan had a winning chemistry in Shoojit Sircar’s National award-winning film Piku (2015). They are set to reunite for an untitled venture to be directed by Vishal Bhardwaj.

Initially, Honey Trehan was brought in to helm the project, but later they mutually decided that Bhardwaj would direct the film.

The period film is based on the book Mafia Queens of Mumbai written by S Hussain Zaidi and has Padukone portraying a female gangster. It is unknown what role Khan is to play in the film. The two haven’t begun filming for the project yet and it, too, looks likely to be released towards the end of 2018.

The Song of Scorpions