We only appreciate the army at the time of war: Sidharth Malhotra


In a group interview, the actor shared his thoughts on the title of his upcoming film, Aiyaary, experience of working with Manoj Bajpayee, and the reasons for shifting the film's release date.

Karan Johar launched three actors with Student Of The Year (2012) — Alia Bhatt, Varun Dhawan and Sidharth Malhotra. While Bhatt and Dhawan were carrying on the family legacy and have graduated to the next level with their subsequent films, the Delhi boy, Malhotra, is yet to taste an equal success.

Even though Malhotra's charm and looks have gained attention, his recent releases, A Gentleman (2017) and Ittefaq (2017), were almost a blink and miss at the box office.

The actor is now gearing up for his next, Aiyaary, a first army based film for him. It is also the first time he has worked with director Neeraj Pandey and shared screen space with a powerhouse actor like Manoj Bajpyee.

In a group interview, the actor shared his thoughts on the title of his upcoming film, Aiyaary, experience of working with Bajpayee, and the reasons for shifting the film's release date.

You celebrated your birthday (16 January) with the Indian soldiers. How special was that?

We were in Jaisalmer. I decided to celebrate my birthday with all those jawans (soldiers) who share the same birthday [sic]. There were many whose birthday fall on that day. It was special not just because it was my birthday, but just to spend time with them, make them laugh, give them a memory.

They work on the borders where they don’t meet so many people, not everybody goes there. So, for them it was a big event that somebody came and celebrated with them.

The film has a unique title with most being clueless about its meaning. I guess that it creates an intrigue around the film. Doesn’t it? 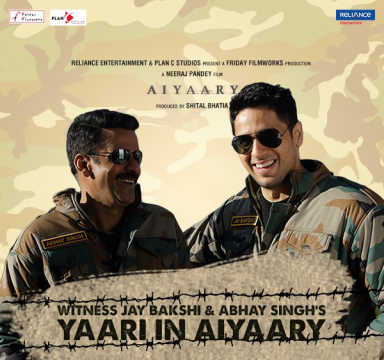 Absolutely. Not knowing the meaning and finding it interesting is the thing to do with titles. It is one of the most interesting titles I’ve had. All the credit goes to Neeraj Pandey. It’s neither Hindi nor Urdu, but a Persian word, which he read in Chandrakanta TV series.

It’s very apt for our film, because the characters are military intelligence agents, who can shape their forms. Shape shifters is what they are called. Aiyaary means that. Someone who knows Aiyaary is one who can trick you.

What was your reaction when you were told about the title?

Iska matlab kya hai? (What does it mean?). Where have you (Neeraj Pandey) got this word from?  It sounded intriguing, and you want to know what the film is all about.

I guess you comeback as a different person whenever you do a film that is based on the army. What was your take from the film?

I was clueless about the armed forces, the various divisions, for instance what is the difference between the BSF (Border Security Force), the army. They both come under different ministries, they have different jobs altogether. Within the army there are so many regiments. The military intelligence differs from RAW (Research and Analysis Wing) or the Intelligence Bureau (IB).

We have loads and loads of agencies that are protecting us and doing different kinds of jobs. Coming back to the army or the BSF, they are the one who are on the ground, manning borders 24x7, providing us the security that we all live in freely today.

People are not aware of the kind of sacrifices they make. We only appreciate them at the time of war, which I think is unfair. Even if we aren’t at war, the BSF is still on guard, they don’t get offs.

You’ve largely been part of mainstream cinema before. Now you’ve done a film that is different to the ones you’ve done...

A good film is a good film. No matter from where it comes, which director helms it. I had met Neeraj Pandey before. He understood the keenness to work [sic]. I was interested in knowing which film he was writing. I was happy to know that there was a space for an actor like me in a film like this.

You know his films will always deliver, they always carry a message. As an actor, that helps you for you know what zone are you getting into. His films are thrilling, fast paced, have a good message. I’m just excited to be part of such a film.

This is your first film with Neeraj Pandey, and also the first time you are sharing screen space with Manoj Bajpayee. How was the experience?

I found out about the cast only later. It can genuinely get you to up your game. I decided to concentrate on my character, because the other actor will be so good. That is a great advantage for the viewer.

Majority of my scenes are with Manoj Bajpayee. I got to learn so much from him; understanding how they (actor's like him) treat acting, their preparations. All this is great for me.

I was intrigued as to how Manoj himself keeps taking up acting workshops. It was nice of him to just sit with me and talk about acting. I asked about the techniques he adopted while working in theatre, (how he) prepared for his scenes, (we also spoke of) Hindi poetry, Urdu diction...there is so much to learn!

There is no guarantee that a film coming out on a particular date will be successful. But as an audience wouldn’t you have preferred to watch a film like Aiyaary on 26 January?

Yes, as a film about the army, you would have wanted the film to come out on Republic Day and luckily Republic Day fell on Friday this time. That was the initial thought. It would have been confusing for an audience to choose between three films — Padmaavat, Pad Man and Aiyaary. Two films are still fine but three becomes a worry. Of course, may be we wouldn’t have got too many shows. It’s a production call. We are confident about our film. Whichever date it comes, we would rather have more screens. 9 February gives us more screens. We are happy that we will have a wider release now.

(The interview was taken on 19 January, a few hours before Akshay Kumar announced that Pad Man will be released on 9 February, instead of 25 January.)

It was supposed to be to Pad Man versus Aiyaary. Things looked all set until Padmaavat decided to step in and Aiyaary had to shift its release date. Didn't it cause great inconvenience?

Yes, it is an inconvenience for us. But there is an understanding, even if they (Padmaavat) haven’t spoken of it, we are showing the understanding and maturity that their film has suffered due to unforseen circumstances.

Where do you see yourself amidst actors like Ranbir Kapoor, Ranveer Singh, Varun Dhawan?

I think it is too early to talk about anyone’s journey. It’s just the beginning. Look at the senior actors, you would have judged them after 10-15 years. It’s difficult to judge on 3-4 films.

A Gentleman didn’t do well both commercially and critically.  How did you take the criticism that came your way then? 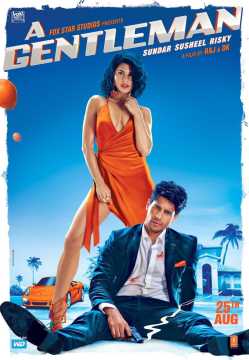 Having said that, there were some who gave good reviews. Some people like to pick the bad, some judge purely by the business. There were other releases then, we lost few territories due to the Ram Rahim (Gurmeet Ram Rahim Singh) case. The business got affected there.

There are a lot of aspects we can talk about as to why the film failed, but perhaps the tonality didn’t appeal. Sometimes things work, sometimes they don’t.