How Geeta Bali landed her iconic roles in Sohag Raat, Albela and Baazi


On her 53rd death anniversary, we look back at how the successful, vivacious actress was cast in her most popular films.

The vibrant actress, Geeta Bali, who first came to Hindi film producers’ notice with Kidar Sharma’s Sohag Raat (1948), died at the young age of 35 after contracting smallpox on a film set. In her nearly two decade career, she worked in over 70, mostly B-grade, films.

She quickly acquired star status due to her spontaneous performances and sunny smile. Looking back at her short career, there are three films that instantly stand out — Sohag Raat, Albela (1951) and Baazi (1951). They helped her breakthrough as an actress to look out for.

Filmmaker Kidar Sharma in his autobiography, The One and Lonely Kidar Sharma, wrote about how he met and cast the new actress in Sohag Raat. It was dance director Pandit Gyan Shankar who suggested Bali’s name to Sharma. The young woman had come over to Mumbai (then Bombay) from Lahore with actor Mazhar Khan.

Sharma visited Bali and her family; they were staying with some acquaintances in what seemed like a "large bathroom". She showed Sharma some of her dance moves and he decided to cast her. “It was Geeta’s nymph like naughtiness that finally persuaded me to select her for my film Sohag Raat. She was not at all beautiful, but she had a certain charm and innocence, a bit of tomboyish flavour,” Sharma wrote. 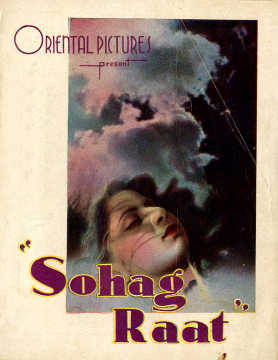 He explained that the actress was quite raw when she worked in his film. She was to play a simple shepherdess and when they went for the outdoor shoot in Kohlapur, Sharma asked her to pretend to be like her sheep who were grazing and drinking water by a drain.

Bali imitated the action and drank the water too! The young girl had to be hospitalized for three days for her stint. Sharma said of the incident, “It was her devotion to work that created a soft corner in my heart. As an actress, I am proud of the fact she learned from me to express a much wider range of emotions than anybody else discovered by me.”

After the release of Sohag Raat, Bali was inundated with film offers and worked steadily for the next few years. It was in Guru Dutt’s directorial debut Baazi that brought the actress the breakthrough she required. Her role as dancer Leena was celebrated, even though she was sharing the screen with Kalpana Kartik, who was being launched by Navketan Films.

Just as Dev Anand’s Madan came to understand and like Bali’s Leena, so did audiences take a like for her as she charmed them through the SD Burman number ‘Tadbeer Se Bigdi Hui Taqdeer Bana Le’, sung by Geeta Dutt.  Anand later remarked that audiences returned again and again to watch her in the film. An Indianexpress.com article delved in to the reason behind her success in the film, stating, “Bali strikes the perfect balance between endearing and intriguing and even in a supporting role, she shines in every frame.”

Balraj Sahni, who wrote the script, recalled in his autobiography how nervous he was approaching the actress for the part. He and Guru Dutt went to her bungalow and waited for her to return home from a film shoot.

Sahni recalled, “When she eventually arrived, she had still on the dress of the part she was then playing and her face was made up. I remember, she was looking dazzlingly beautiful. Throughout the recitation, she sat there restless and fidgety. At least that is the impression I got, which might be due to the fact that, that was the first time I was ‘reciting’ a film story to an actress! All the same, I could not fail to see that her grasp of the film medium was amazing!”

Thankfully, she interrupted him a third of the way through the reading and confirmed her participation in the film. The two heaved a sigh of relief as they heard the actress was working on around 30 films and expected her to turn down Baazi.

That same year, she began her successful onscreen partnership with Bhagwan Dada in Albela (1951). The actor-filmmaker who was making a switch from action to social films went to Bali, like Dutt and Sahni, but with a rough draft of the script. He had an idea in his head about a top dancer who takes an untrained performer under her wing and makes him a star.

While Bhagwan Dada knew she was the one for the role, he was unsure if he could afford her fee. So he bluntly asked her how much she was being paid by other producers. In an interview, he remembered what he told her to acquiesce to the project, “I can’t match those prices, but I can offer you an extremely challenging role with the promise to exploit your histrionics in a way no one has before. None of the other established heroines will do. If you trust me accept my film otherwise I’ll pick up a newcomer and mould her.”

According to Bhagwan Dada, she agreed to do the film for a quarter of her regular fee. Her gamble paid off, when the film, with its chart-bursting songs became a hit from opening day and completed a silver jubilee (25 weeks) at the Imperial Theatre in Mumbai.

Bali had dramatic performances in films like Anand Math (1952) and Sohrab Modi’s Jailor (1958), but when it comes to her filmography, Sohag Raat, Albela and Baazi are the most remembered.