Aiyaary to clash with Padmaavat?


With Pad Man out of the picture of the Republic Day weekend, Aiyaary has returned to clash with Padmaavat.

Last evening (19 January), Akshay Kumar announced that the release of his film Pad Man has been postponed to 9 February from 25 January after Sanjay Leela Bhansali requested him to let his film, Padmaavat, get a solo release during the Republic Day weekend.

However, it seems the makers of Aiyaary, starring Manoj Bajpayee and Sidharth Malhotra, are mulling over advancing their film's release to 26 January.

Last night, veteran film critics and trade analysts Komal Nahta and Taran Adarsh had speculated the news on their respective social media channels. But they deleted the posts soon after. 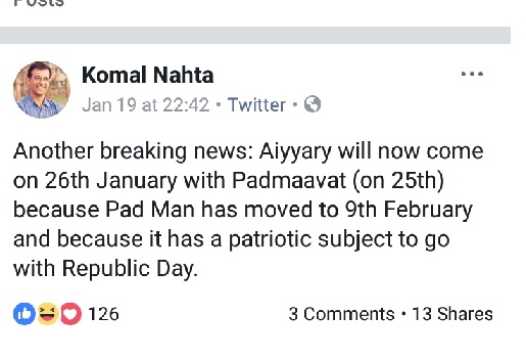 Originally, Aiyaary was scheduled to be released on 26 January with Pad Man, but was deferred when Padmaavat's release date was set on 25 January. Now with Pad Man out of the picture of the Republic Day weekend, Aiyaary has returned to clash with Padmaavat.