On the 30th anniversary of the passing of the actress Hindi film fans fondly remember as Mausi, we look at some of her better known roles in the latter half of her career.

For almost six decades, Leela Mishra was the eternal maternal figure in Hindi cinema. She was mother, aunt, and grandmother to many an actor and actress on the big screen. When she died at the age of 80, she had appeared in over 300 films.

Mishra began her career with her husband, Ram Prasad Mishra, also an actor. She was married at 12 and by 17 had two daughters. But her husband was keen to work in the growing film industry.

In an interview, the veteran actress had recalled, “I was discovered by Mama Shinde who was working for Dadasaheb Phalke’s Nasik Cinetone. He persuaded my husband to make me work in films. I had no idea what films meant. My husband used to bring me small strips of film and show them and say, “You will be working in this.” And I wondered how a fat person like me would fit into such a small frame. The dehati that I was, it took him years to explain how things happened inside the camera.”

As there were few women wanting to join the industry at the time, Leela Mishra was offered a salary of Rs500 as against Rs150 for her husband. However, she turned down those early roles as she would have had to hug another actor and say lines like, “Kumar, main tumhare bina zinda nahin reh sakti [I can’t live without you].”

Here are a few of her well-known film roles from the latter part of her career.

The light-hearted family film about twins separated at birth showed off Dilip Kumar’s comic side as he played two distinct characters. Leela Mishra played Ganga, the fiercely protective adoptive mother of Shyam, who doesn’t think twice before thrashing him as he tries to get cast in a movie as a hero. Later, when Ganga comes across his twin Ram, her insistence to get him to say she is his mother is hilarious.

Starring Meena Kumari, Ashok Kumar and Pradeep Kumar in a love triangle, Bahu Begum was a Muslim social directed by M Sadiq, his last film. Leela Mishra took on the small role of Kariban Bua, who raises a motherless Zeenat Jahan (Meena Kumari) and tries to instil discipline and order in the young woman's life. The film then follows events after Zeenat’s wedding is arranged to Nawab Sikandar Mirza (Ashok Kumar) and not Nawab Yusuf (Pradeep Kumar), with whom she is in love.

The name and the relation ‘mausi’ stuck to Leela Mishra for most part of her career, irrespective of whether her character was the real maternal aunt to any young man or woman. In Shakti Samanta’s Amar Prem (1972), she was ‘Mausi’ once again as she runs a brothel and takes in Sharmila Tagore’s Pushpa. Business-minded yet kind-hearted, Mausi takes Pushpa under her wing and speaks plainly about some home truths to her.

In the cult classic Sholay (1975), directed by Ramesh Sippy, Mishra played the iconic ‘mausi’ to the garrulous Basanti (Hema Malini). But it was the quietly comic scene with Amitabh Bachchan’s Jai that Hindi film fans will always remember, in which he ‘praises’ his good friend Veeru (Dharmendra). Writer Salim Khan revealed in a rediff.com interview that the scene was drawn from real life; he had had a similar conversation with Honey Irani’s mother on behalf of his then writing partner, Javed Akhtar. Khan had got the idea from watching a scene from Kishore Kumar’s Half Ticket (1962).

The devotional film, which was released the same day as Sholay (1975), was a small film that far exceeded expectations. With actress Anita Guha portraying Shri Santoshi Maa, Kanan Kaushal and Ashish Kumar played a young couple, Satyavati and Birju, whose life is continually tested. Satyavati, a devout follower of Santoshi Maa, believes her faith in the goddess will prevail over everything. Leela Mishra played Birju’s widowed mother who has six other sons but is always worried about her youngest, especially when he goes missing. 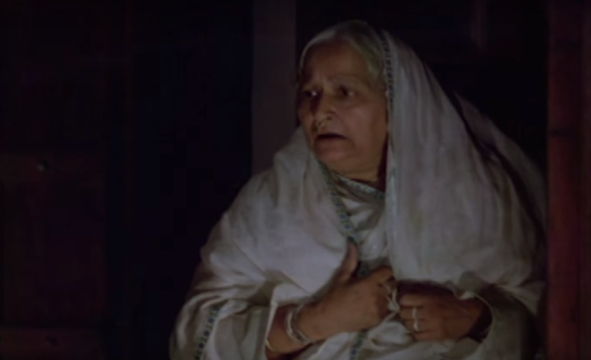 Mishra had a small role in Satyajit Ray’s only Hindi feature film Shatranj Ke Khilari (1977) as maid Hirya to Shabana Azmi’s character Khurshid. In an old interview, she recalled how Ray pursued her to come to Calcutta and shoot for his film. She shot her scenes with Azmi within a day and remembered how she made the great director laugh. “Once I said something funny about him. He got a bit curious and asked one of his assistants to translate. On hearing what I had said, Ray burst out into laughter and said, 'Leelaji, you are a great joker',” she said in the interview.

For Basu Chatterjee’s Baton Baton Mein (1979), a look at two close-knit Christian families, Leela Mishra took up a different avatar, abandoning her traditional saris and wearing dresses to play Philomena Aunty. The older woman stops by the Perreira household frequently to give advice and company to the family. 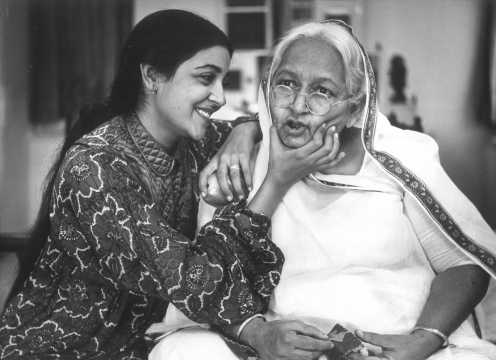 Sai Paranjpye's Chashme Buddoor had several iconic characters, from Saeed Jaffrey's Lallan Mian to Deepti Naval's Miss Chamko. Leela Mishra, in a smaller role, was part of the ensemble cast that included Farooq Shaikh, Ravi Baswani and Rakesh Bedi. As the supportive dadi, or paternal grandmother, of Neha (Naval), Mishra contributed to the film's crazy antics by joining Baswani's Jai and Bedi's Om in their plan to help reunite Neha and Siddharth (Shaikh).