Padmavat v Pad Man: Which film holds the edge at the box office?


The likelihood of the two big films being released on the Republic Day weekend has trade circles agog. A special report.

A champion boxer is ready for his next bout against a smaller opponent. The champion's win is a foregone conclusion. The challenger is happy to be the underdog and settle for second prize.

Then, two weeks before the big day, battlelines are suddenly redrawn. A newer, bigger contender enters the ring to give the favourite much tougher competition.

Akshay Kumar's Pad Man was to be the big Republic Day release while Neeraj Pandey's Aiyaary had limited ambitions. The stage was set for a friendly no-contest. Now, though Viacom18 Motion Pictures has not made any official announcement, trade analyst Taran Adarsh’s tweet about Sanjay Leela Bhansali’s Padmavat being released on 25 January has set the stage for the first big box-office clash of 2018.

It is now likely to be Pad Man versus Padmavat, one a film about periods, the other a period film inspired by a legend. The makers of Aiyaary quickly, and probably happily, shifted its release to 9 February.

For the trade, however, a big box-office clash is never good news. Analyst Atul Mohan told Cinestaan.com, “Ideally, the clash should be averted. Padmavat is a big film that can afford to come on any Friday. Similarly, Akshay Kumar doesn’t really need Republic Day. But Pad Man's makers had long announced 26 January as their release date, then advanced it to 25 January. So [Padmavat] coming the same day is like trying to spoil someone else’s party.”

What has flummoxed industry watchers and insiders, however, is that so far Viacom18 Motion Pictures has not made any official announcement regarding Padmavat's release. Some believe the producers are still evaluating the situation, not just with respect to the competition but also the political situation, with Rajasthan having already announced that the film will not be released on its territory.

Film exhibitor Akshaye Rathi said, “Till Viacom or Bhansali make an official announcement, it would be premature to comment on the clash. I don’t know why there is no announcement, but I am sure the production house in question has its own reasons.

"Having said that, the general belief in the trade is that both films are coming on the Republic Day weekend. It’s only a matter of time before things become official."

In an earlier conversation, Prernaa Arora of KriArj Entertainment, co-producers of Pad Man, had spoken about the mutual respect and cooperation within the industry. So what does she make of Viacom and Bhansali’s silence?

“I really respect the way Akshay Kumar works," said Arora. "The learning we get from him is very different. The kind of superstar he is, and when I have a business partner as strong as him, he tells us to only focus on your film and its release.

"There is a cloud around Padmavat, there is no concrete decision from the studio, so you don’t know what really is going to happen."

Arora said she is in touch with Viacom18 and shares a great relationship with the team there. "They have been my partners before, and we will work together in the future,” she said.

Arora recalled how KriArj shifted the release of its film Parmanu (2018) after Padmavati, since rechristened Padmavat, was initially supposed to be released on 1 December 2017. “I understand what’s happening with Padmavat," she said. "They tried for a 1 December release, Out of respect, I moved the release date of Parmanu. If the Padmavat makers had a choice, they would have released it then, but what happened to them was unfortunate and unavoidable.

"Today they are left with no choice. They have to release their film. I don’t take it as a clash. I have no official confirmation from them. However, regardless of whether they come, Pad Man will come on 25 January."

Sanjay Leela Bhansali’s Padmavat has been through hell after some Rajput groups vandalized the film's sets twice. These groups are still opposing the film's release. So, the producers may also be keen to get it done and dusted with.

However, if your film has cost a whopping (estimated) Rs180 crore, how sensible is it to release it with Pad Man, which stars one of the industry's most bankable stars? Akshay Kumar has been having a dream run with his last five films each bagging over Rs100 crore nett in India theatrical business.

Mohan said, “I think Padmavat’s budget till 1 December was around Rs180 crore. A single day’s delay adds to the cost of the film. Yes, it is a gamble, but they have no alternative but to come as soon as possible. Given the hype around it, the film could have been released on any Friday, provided it is backed by the exhibitors.”

But exhibitors are worried about the threat from groups like the Rajput Karni Sena. “The bigger problem for Padmavat is the insecurity among exhibitors," Mohan continued. "The film is not being released in Rajasthan, and you never know, one or two other states may follow suit [Gujarat and Madhya Pradesh have since said the film will not be released there]. No one wants to risk damage to their properties, especially the multiplexes, for they are hit hard by vandalism.”

An industry insider requesting anonymity said, “I don’t think the government is providing adequate security. In the past, we have seen two policemen being deployed at each theatre. Now when a mob of 700 people comes, what can two policemen do?”

Another challenge for both sets of producers is the scramble for screens. “If Padmavat were to be a solo release, they would have looked at 4,500 screens," Mohan said. "Pad Man would have eyed 3,500. Sadly, we don’t have those many screens in India. Padmavat will not be released in Rajasthan, and some other states. Those territories will open up for Pad Man.

As for the box office prospects of the films, Mohan said, "Usually a clash between two big films results in a loss of 25-30% for each. However, both these films have strong content. And given the hype around Padmavat, if it gets a smooth release, I think it can still make around Rs250 crore nett in India, maybe even Rs300 crore.

"As for Pad Man, Akshay Kumar's films usually rake in around Rs125-130 crore nett. Akshay Kumar tends to charge reasonable fees, but he takes a substantial share of the profits.

"The one challenge for Pad Man is whether the subject will appeal to the family audience. There is already talk that many may not be comfortable watching such a subject with their parents. Also, on an average, a family spends Rs2000 to watch a film at a multiplex, including refreshments. How many families will be willing to spend double that amount for two big films being released in the same weekend? Thus Pad Man may find it tough to touch the Rs150 crore nett mark."

But will 2,500 screens suffice for Padmavat to recover its costs. Mohan believes Viacom18 Motion Pictures and Bhansali are banking more on worldwide collections.

"With the hype around the film worldwide, overseas collections will be huge," said Mohan. "Dangal (2016) made Rs1,500 crore in China alone. If you look at the US, Dangal did around Rs100 crore. Padmavat will have to do better than that. The international version was ready in November itself. What we in India will see is the censored version.”

As for the number of screens Padmavat may get overseas, Mohan said, "A Salman Khan or Aamir Khan movie gets 300-350 screens in the US. Padmavat might get 500–600. Similarly, in the United Kingdom, a Hindi film usually gets 150 screens, but they might get 225-250 screens.”

Exhibitor Rathi, however, had a different projection. “The release size of Pad Man would be around 1,800-2,000 screens in India," he said. "I am not saying they won’t get more screens, but I believe that is the size they are targeting. On an average, most of Akshay Kumar’s films are released on around 2,000 screens.

"The film’s budget too should be less than Rs60 crore. For Padmavat, I reckon the film will be released on 3,500-plus screens pan-India. I hope both films make their mark. We need to build on the momentum that Tiger Zinda Hai (2017) has generated.”

Pad Man co-producer Arora admitted the film's screens target is 'reasonable'. “We have great faith in Sony Pictures," she said. "They have their own strength. I don’t have to worry about the screens. I trust them to do the best. I don’t have the exact count, but it would be around the 2,500 mark." She claimed that the distributors have already locked the screens and theatres for Pad Man. 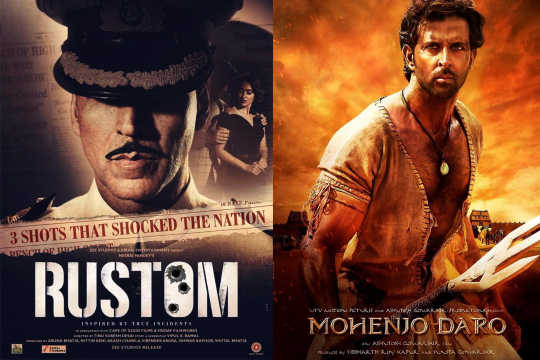 The key film, however, was KriArj’s Rustom (2016), which, coincidentally, also competed with a period film, the Hrithik Roshan-starrer Mohenjo Daro. The former was released on 2,350 screens while the latter got 2,700 screens.

Rustom was made on a budget of Rs73 crore while Mohenjo Daro’s estimated budget was to the tune of Rs138 crores. The Akshay Kumar film was a hit, bagging over Rs170 crore at the India box office, while Mohenjo Daro was a disaster, bagging just Rs75 crore in the country.

Will history repeat itself?

“Thanks," responded Arora to the question. "Pad Man is a film for the country, for its welfare, for women's hygiene. It is an important subject. I am sure the country will embrace it with a lot of pride. Akshay sir is a superstar, but he has shown guts when no one else would taken up such a subject."

While Pad Man has set the right buzz so far, Padmavat is no Mohenjo Daro for sure. The last week of January will decide who comes up trumps.