Arun Govil aka Ram: People touch my feet even 30 years after Ramayan


On his 60th birthday, the actor looks back at his journey that is not just limited to the mythological serial.

Actor Arun Govil’s name has become synonymous with Lord Ram over the decades. After starring as Ram in Ramanand Sagar’s classic television series Ramayan, it has become impossible for the audience to not think of the deity whenever they see or even hear of Govil. The actor has a huge number of Hindi films to his credit.

On his 60th birthday, Govil got candid on his Ramayan journey, how people still touch his feet and shared that he also played Laxman (Lord Ram's brother) in a film.

How did your acting journey begin? Did you always want to be an actor?

No, it wasn’t like that. I had never thought as to what I wished to do. I was active in theatre during my college days. But hadn’t decided to become an actor. I started off with Rajshri Productions' Paheli (1977) where I played the second lead. They liked my work, so they signed me for three other films — Sawan Ko Aane Do (1979), Raadha Aur Seeta (1979) and Saanch Ko Aanch Nahin (1979). Later on, I did a film Jio To Aise Jio (1981). Out of these Sawan Ko Aane Do was a very big hit. Saanch Ko Aanch Nahin and Jio To Aise Jio were jubilees.

I read somewhere that during the start of your career, you had decided to become a businessman. Is it true?

My brother was already a businessman in Mumbai. Basically, I came to join him. But it didn’t suit my temperament. So, I thought of doing something else on my own. Then this film thing came into the picture.

You got to play the role of Lord Ram in Ramanand Sagar’s classic TV serial Ramayan. How precious is the project to you, not only in terms of your career, but also your life?

It wasn’t that when I decided to do the serial. I had already worked with Mr Sagar. I had done a film with him and also the serial Vikram Aur Betaal. When I came to know they are making Ramayan, I said I would like to play Ram. It came to my mind that I should play that character. But I didn’t say that because I thought it would be great for my career. The project was such that I felt like doing it (the role).

But it proved to be a very important milestone in my career and life. People still know me as Ram. Even in places like airport, they touch my feet. It’s been happening since more than 30 years. It is still stuck in people’s minds. Not only the older generation, but also the new generation has seen it. It has gone into the history of not only Indian television, but also the Indian psyche.

What was your reaction when people touched your feet for the first time thinking of you as Lord Ram?

Our team of Ramayan had visited a big industrialist, who I won't name. He did shashtang namaskar (prostration) and touched my feet. I felt weird. I asked, ‘Why are you doing this?’ He said, ‘We are just bowing down to our faith in Lord Ram. What is your problem?’ I said, 'no I don’t have a problem' (laughs). There were not bowing down to a person. It was their shraddha (devotion) towards Ram. So, they developed shraddha even towards the person who played the character. 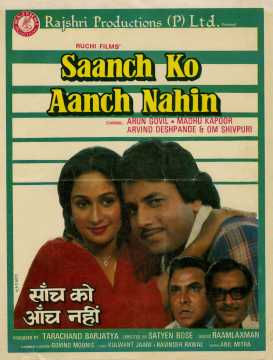 Did your faith in Lord Ram increase after doing this serial?

No, right from the beginning puja-paath (rituals) used to take place at my home. The book which used to be read at our place was Ramayan. My mom also used to read it. We were also asked to read it. So, we read it in our childhood just like a story. These were the only things to read during our childhood.

After the success of the serial and your popularity as Ram, did your approach towards signing your next projects change?

Before Ramayan, I only used to do films. Vikram Aur Betaal was the only serial I had done. But after Ramayan, my image as Ram had become very strong. Image plays a big role in commercial cinema. When I used to go to parties, even heroines used to stand up with respect. When you are looking for work, you give feelers by asking about the next project to those you know. So that even I can join their next project. But people used to say, what can we give you since your image is so strong (as Ram)? So, the commercial film scenario started becoming shaky for me.

Later on, you realize that plus and minus is a part of everybody’s life. You get something for which people are touching your feet even after 30 years. It means there have been good after-effects of it. You also want to earn name and fame through Ramayan and at the same time you also want to do well in commercial cinema, which is opposite your image. You can’t get both. I feel if you put both your feet in two boats then it becomes difficult.

The current scenario in films and television is different. This wasn’t the scene 30 years ago. Image played a big role then. So, I didn’t get many offers from commercial cinema. And the offers I was getting, didn’t excite me. And I didn’t think much of TV. I felt I shouldn’t spoil the name I have already made. I didn’t force myself to do something else. Why does a person work? It is for survival, money and name. I didn’t have a financial problem.

It also depends from person to person. There are people who keep running after money even after earning crores. Some feel they are happy and satisfied with this much. I have always been satisfied and peaceful in life. If I hadn’t made a name for myself, you wouldn’t be taking my interview after 30 years. If God feels this much is enough for me to make a name for myself, I would say, fine, no problem. And if something good comes up, I would do that too. I also kept doing production and made serials for Doordarshan.

You did a film Lav Kush (1997) where you played the character of Laxman. So, here we have Ram playing Laxman. How was it to do a mythological film and see someone else (Jeetendra) play the role of Ram?

Padmalaya Films had made the movie. I had done a few films with them earlier, including Himmatwala (1983). When they offered me Lav Kush, I had advised them to not have me in the role of Laxman, irrespective of whether they cast me as Ram. It’s okay if you cast Jeetu ji as Ram. He had been their regular actor. But I didn’t want them to cast me as Laxman because my image was that of Ram and they would clash. But they said, 'No we only want you to play this role'. As I had done films with them before, I couldn’t say no to them. So, I did it as a character. And the film didn’t do well.

The era when Ramayan was aired is considered the golden era for Indian television. People feel that although today we have lots of TV channels, they are no match to the goodness of that era.

It is because we don’t have good content nowadays. The content in today’s serials is socially depressing and negative. Every girl or woman in the serials knows where to find goons. They all know how to get someone killed. This is weird! There is no positiveness in TV serials today. It makes you wonder if the entire society has become negative. When the serial starts, you feel it has a new thought. But by the time it completes a month, it has the same old goons and crime. They show women getting burnt and poisoned. And they give a disclaimer that the makers don’t support these things, it is a work of fiction made only for entertainement. You are showing it and then you say you don’t support it?

Any person can appreciate negative content for the sake of good performances of the actors. But the way God has made us, every person likes watching good things. If you return home and see your wife fighting with you and your kids plotting to kill you, would you like that? Nobody would. Sometimes, I feel people would have committed crimes after watching such serials. It goes into your mind and you keep thinking about it.