Acclaimed writer-director Basu Chatterji, whose films defined the middle-of-the-road films of the 1970s and early 1980s, was born on 10 January 1927. After assisting director Basu Bhattacharya on Teesri Kasam (1966), he made his directorial debut with Sara Akash (1969), adapted from Rajendra’s novel.

Chatterji quickly established himself a director of note with films like Piya Ka Ghar (1972), Rajnigandha (1974) and Chhoti Si Baat (1975). In 1978, he made a feel-good family film, Khatta Meetha, with a large ensemble cast of Ashok Kumar, Rakesh Roshan and Bindiya Goswami.

Writing the dialogues and screenplay, Chatterji chose to base his story about the merging of two families. Khatta Meetha begins with an introduction that states, “The Parsi community has made its presence felt through its valuable contributions to the social, economic, cultural and artistic scene in India for several generations. Many Parsi names are etched in the history of the Indian people as great sons of India. To commemorate their achievement, the producers of 'Khatta Meetha' humbly dedicate this film to the Parsi community.” 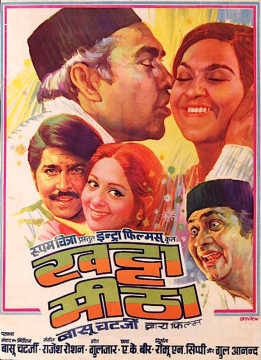 The Mistry-Sethna family’s happiness is disrupted by one Mr Kerawala (Pradeep Kumar in a guest appearance) who disapproves of his daughter Zarine’s (Bindiya Goswami) relationship with Feroze. He does his best (read: worst), but at the end of the day, he can’t stop true love.

Chatterji has infused Khatta Meetha with affection and love, and it shows in the chemistry between the cast. When all the characters fight and act selfish, they eventually reconcile because love is what binds them together. The characters, while enacting members of the Parsi community are all unique, the Mistry and Sethna children are all individual, while Zarine Kerawala is a refreshing young woman who openly rebels against her father.

Piloo Wadia who plays Dara's mother, Mrs Dubash, helped Chatterji as a consultant on the film and the director has used Keshto Mukherjee in a special appearance in a song as a milkman. Actor Amitabh Bachchan also shows up as a prospective Parsi groom for Preeti Ganguly's Freny in a song sequence.

Chatterji has involved familial connections cleverly in the film. Padamsee, who was introduced in Khatta Meetha, plays mother to Preeti Ganguly, the real-life daughter of Ashok Kumar, while Ashok Kumar plays father to Ranjit Chowdhury, the real-life son of Padamsee. Varma who joins the Mistry-Sethna clan as Homi’s son-in-law, married Ashok Kumar’s other daughter Rupa in real life.

Khatta Meetha, which was released this week 40 years ago, was one of the few films to showcase the tiny Parsi community. The film was loosely inspired by the Hollywood film Yours, Mine And Ours (1968) and transported into an urban Indian setting.

Chatterji was known for giving all of his characters their due, and did the same in Khatta Meetha. After revisiting this sweet old classic, you’ll want Homi and Nargis to adopt you too.