Prosit Roy’s Pari promises to be the horror flick that audiences have long been craving for.

Caution. If you have a feeble heart, Pari is not a film that you will be happy with. But if you are among those who love spooky thrills then you should mark the date and witness the world of Pari.

Anushka Sharma’s friendly-ghost avatar in Phillauri (2017) is long forgotten. However, the actress is anything but friendly in Pari. The makers of the film have released yet another gripping, spooky teaser — one that will make you fear the actress.

Most horror stories are predictable for they usually have a protagonist possesed by an evil spirit. In Pari, the devil himself is out to hunt and play. Horror films thrive on spooky thrills and eerie background scores to send shivers down the audiences' spine. The near minute long teaser has implemented both aptly. Sharma’s bloody face is enough to give you goosebumps.

The most striking scene in the video comes when Sharma’s character finds a chained woman in her house, seated on the floor carrying a tiny, almost lifeless, child in her arms. The woman drinks from the child's milk bottle and we realize she looks exactly like Sharma. The next shot has Sharma laughing with a blood covered face. The actress looks like the devil incarnate in this scene.

It makes you wonder whether the evil spirit in the film is someone who died with her child.

One will immediately draw comparisons between Pari and James Wan’s The Conjuring (2013) where the evil spirit turned out to be a woman (Bathseba) who was accused of witchcraft and of sacrificing her own new born to please the devil. Bathseba then killed herself by hanging from a tree.

Naturally, some will also point towards the similarities to Hollywood films in some scenes. However, all such talk is futile for Pari will judged by the hell it creates.

Pari has Parambrata Chatterjee, who seems to be playing a character close to Sharma. It seems, he is going to be the one to bear the brunt of the devil. 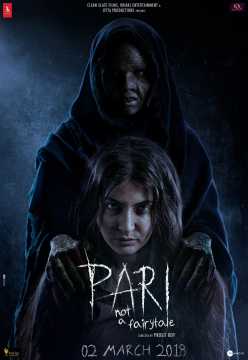 In one of the film's posters we see a scary looking old witch standing behind Sharma, but there is no sight of her in the teasers. Perhaps, the makers will reveal something about her in the trailer.

Pari promises to be the horror film that the Indian audiences have long been craving for. Hindi cinema has hardly tapped the genre successfully in the last few decades, barring, Vikram Bhatt's Raaz (2002).

Directed by Prosit Roy, Pari sure is no fairly tale as the makers rightly claim. The film will be released on 2 March, the festival of Holi will never be the same again.