Basu Bhattacharya, filmmaker who was fired up by one-liners: Birth anniversary special


For the director's 84th birth anniversary, which would have been around 31 January, ex-wife Rinki Roy shares some anecdotes from his early life and film career.

Basu Bhattacharya, who made his name in Hindi cinema with Teesri Kasam (1966), was inspired to become a filmmaker after watching Satyajit Ray’s films.

Bhattacharya hailed from an orthodox Brahmin family from a small town, Cossimbazar, in West Bengal. In an exclusive conversation with Cinestaan.com, his ex-wife Rinki Roy Bhattacharya revealed that his family were actually priests to the royal family in Cossimbazar. No one in the family had worked before.

“[Basu] would watch films and go to Calcutta which was [very far]," Rinki Roy said. "What sparked Basu’s desire as a filmmaker was Satyajit Ray’s second film, Aparajito (1956). He identified with Aparajito, the guy who just leaves home.

"Apu was like a childhood hero for many, the wandering spirit, [with] the unfulfilled desire of wanting to study and leave his vocation. If you remember, Apu’s father was a priest. He used to say that quite often. But he didn’t want to work in Calcutta, with Satyajit Ray.”

Many talented Bengali artistes arrived in Mumbai, then Bombay, to work with either filmmaker Bimal Roy or producer Sashadhar Mukherjee. But Bhattacharya came to work with actor-filmmaker Raj Kapoor. Rinki Roy believes it was because he was influenced by his films Awara (1951) and Shree 420 (1955).

However, he could not get an entry into Kapoor’s RK Studios and stayed with Bimal Roy’s assistant Debu Sengupta, near Mohan Studios, where Roy had an office. He ended up assisting Roy for a while on Parakh (1960) but left before the film was completed.

It was a lucky coincidence then that for Bhattacharya’s first film as director, he worked with Raj Kapoor as hero. Rinki Roy said Kapoor was not the first choice for leading man for the project based on celebrated Hindi writer Phanishwarnath Renu’s short story ‘Maare Gaye Gulfam’. 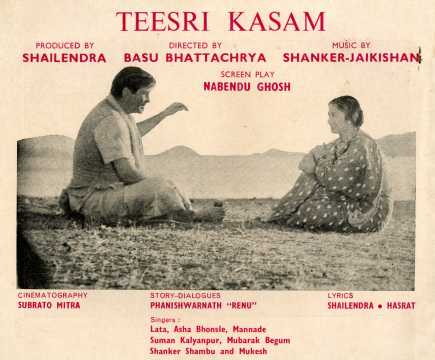 “What happened was that [producer] Shailendra was a Raj Kapoor man. He wrote his most famous songs and he used to be at RK Studios daily. In a state of excitement maybe, he mentioned to Rajji that he is going to produce a film. Raj Kapoor said, ‘You’re producing a film? I hope you are taking me.’ What could Shailendra say? That too Rajji agreeing to [act] without knowing anything about the film."

Bhattacharya had got married just as the mahurat shot was completed and Rinki Roy remembered that both he and producer Shailendra were insistent on getting Waheeda Rehman as the lead actress and cinematographer Subrata Mitra, Satyajit Ray’s cameraman, for the film. Shankar-Jaikishan composed the music while another member of that tight-knit RK group, Hasrat Jaipuri, wrote the lyrics for a few songs.

The film, which won the National award for Best Feature Film, had a troubled production and was greatly delayed. Rinki Roy recalled being on location for the song ‘Duniya Banane Wale’. It was eventually shot on Sholapur road, near Pune, to accommodate Raj Kapoor who was filming his own Sangam (1964) nearby. Originally, the song was to have been filmed in Bihar.

The same year that Teesri Kasam (1966) was released, another Basu Bhattacharya film was made — Uski Kahani (1966). The film was made on a small budget for under Rs1 lakh and introduced two actresses, Anju Mahendru and Dina Pathak. Pathak even received an award for her supporting performance from the Bengal Film Journalists' Association in 1968.

The film was shot in a real home around Bandra, then a suburb of Mumbai. The lead actress was in the news at the time owing to her engagement with the West Indies cricketer Gary Sobers.

Today, the movie is rarely available. In fact, many of the films Bhattacharya worked on were not released, mostly due to distribution problems and because they didn’t have big names on the marquee.

Even Teesri Kasam had a hard time with distribution. “In those days, it was very difficult to release films of this kind, even though it had big stars. Poor Shailendra was in the doldrums because of it. He was not a businessman, he was a poet,” Rinki Roy said.

“Basu used to be fired up by one-liners," Rinki Roy recalled. "His stories, generally, drew from one line, coming from his fertile mind. The story of Anubhav, the threat the wife feels when one of her classmates suddenly turns up, with whom she was probably involved at some point. And he has not come to threaten her, he has come for a job. It’s from the wife’s point of view.”

The filmmaker received a loan from the Film Finance Corporation (later, the National Film Development Corporation) for Anubhav. Rinki Roy said they didn’t even have Rs1,500 for the application fee and Basu borrowed it from her mother, Manobina.

The film took nine months to make and Rinki Roy believes it is one of Bhattacharya's most watched films though he experimented a bit with the cast. Sanjeev Kumar wasn’t initially chosen for the role of the husband, Amar; Pran was.

“He shot with Pran and [the actor] couldn’t fit into that normal, everyday office-going person as he had never done something like that. Basu got scared and said this is not going to work, and he dropped Pran without even telling him. Pran got very upset. He was almost ready to beat Basu at some party (laughs). 'Such an indecent man, does not even have the courtesy to say…' Basu didn’t know what to say,” Rinki Roy remembered with a laugh.

The entire movie was shot at Tanuja’s home at Pedder Road despite the objections of veteran actress Shobhana Samarth. “Her mother was very upset because it took very long. She couldn’t change anything or paint the walls,” she said.

Dinesh Thakur, who played the other man, also assisted Bhattacharya. He lived next door to him and was in and out of their home. However, a young Amitabh Bachchan came very close to being cast in the film.

“Just when Basu had confirmed Thakur, I saw Amitabh Bachchan. He hadn’t started working and I saw him at a reading of his father Harivanshrai Bachchan’s poems on the terrace of Dharmyug magazine editor Dr Dharamvir Bharti’s house. Amitabh was standing and everyone else was sitting. I just looked at him and told Basu, ‘This guy has a lovely voice, he would fit into the other man’s role.’ But he already had Dinesh,” Rinki said.

Anubhav, which completed a silver jubilee, also went on to win a National award. Many on the crew were newcomers. It was cinematographer Nandu Bhattacharjee’s first film and Kanu Roy, former assistant to Salil Chowdhury, composed the music. Singer Geeta Dutt sang some of her last recordings for Roy before she died.

The filmmaker also made films like Aavishkar (1974) and Grih Pravesh (1979), which along with Anubhav, was part of a growing trend of films based on the middle class. “[He didn’t enjoy much mainstream success] but these were not mainstream films. That is the time parallel cinema came into existence. Nobody labelled Satyajit Ray’s films parallel cinema as he was an individualistic filmmaker, but there were others who came up gradually,” Roy said.

In 1980, Basu Bhattacharya also produced Sai Paranjpye’s Sparsh. Roy recalled that Paranjpye used to come to their home with the script of Sparsh but had no funders. “Basu was in two minds and didn’t know what to do. She had her entire thing ready, even the stars were lined up. I told Basu, ‘This is a wonderful subject, you should back it’. And it happened,” she said of the National award-winning film.

After Teesri Kasam (1966), Bhattacharya didn’t make any films based on literature. Later, though, he became friendly with the writer Amrita Pritam. “Amritaji also wanted to launch her film career and she had great regard for Basu," Rinki Roy said. "So she wrote a film for Basu to direct called Daku in the mid-1970s. He started the film with Kabir Bedi in the lead and Bindu as the actress. It wasn’t completed.”

Roy came to the conclusion that a filmmaker must keep in mind certain realities. “If you have a star in a film, it has a much longer shelf life, like Teesri Kasam. Same with my father’s films. You cannot decry the star system. Wherever you have non-star films you cannot sustain the interest and that’s what happened continuously with Basu,” she said.

Rinki Roy often contributed on her husband’s films, from Aavishkar as a set designer to Grih Pravesh (1979) where she suggested songs to be played in the background. She also sat with Bhattacharya, who she felt was a great storyteller, on the scripts, sometimes as the voice of reason, she said.

She found Bhattacharya’s last film Aastha (1997), which was released after his death, deeply troubling. “I found that it was, in a sense, a moral decline," she recalled. "I couldn’t take the story. It was so improbable that a professor’s wife would sleep around with a guy just to buy a pair of shoes. But he went to the other extreme. Consumerism is eating up our society. He trivialized it.”