Dedicated to her art: The journey of Sandhya Shantaram


Continuing our series on women in cinema featuring actresses whom time forgot, we look at the career of Sandhya whose fealty and devotion to legendary actor-filmmaker V Shantaram was unmatched.

The immortal Holi song from V Shantaram’s film Navrang (1959), 'Arre Jaare Hatt Natkhat', based on the Krishna-Radha theme, was performed by Sandhya who had graceful moves as a woman and also donned a mask and performed the moves of a man in the same number.

The enactment of two characters in one dance by the same person had never been seen before on the Hindi screen and the dance, choreographed by Shantaram and Sandhya, was widely applauded.

But few people know of Sandhya’s unusual career graph in cinema. Born Vijaya Deshmukh, she and her sister Vatsala started out as theatre artistes. Their father was a part of the behind-the-scenes team in theatre.

After struggling for a while, the sisters came to Bombay looking for work. Around that time, V Shantaram had put out an advertisement seeking new faces to cast for his film Amar Bhoopali (1951). Vatsala sent her sister Vijaya for the audition, but film historian and memorabilia collector Zafar Aabid Balani recounts that Shantaram was left unimpressed.

The young woman did not have outstanding features or talent, but what struck the filmmaker was that she had a good voice, one that strangely resembled that of his second wife, the actress Jayshree.

As luck would have it, the filmmaker was unable to find any other suitable candidate and offered to cast Vijaya in his film on the condition that she would learn dance for the role. 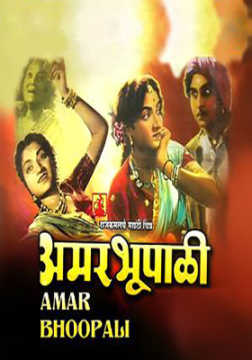 Vijaya, rechristened Sandhya by Shantaram, took rigorous training and did an excellent job in the film. Amar Bhoopali was a big hit and was even nominated for the Grand Prix at the 1952 Cannes film festival.

In her next film, Parchhain (1952), Sandhya acted alongside Jayshree, who was the heroine of the film. The film revolves around a man who is accidentally blinded by a woman. But he falls in love with the same woman as the voice of the maid who looks after him is the same as hers.

The film astutely deployed the similarity in the voices of Jayshree and Sandhya in its narrative. According to Balani, after this film, Shantaram began wooing Sandhya and she ultimately became his third wife. They were married in 1956.

Recounting the roles of the actress, Balani emphasized the deep bond shared between Sandhya and Shantaram. “Sandhya had so much faith in herself and in V Shantaram that she knew that if she worked hard, he would not let her work go to waste," the historian said. "She relied on him and in turn he would give her several challenges which she would do.”

This was a unique bond which worked well till the very end with Sandhya taking up different challenging roles given to her by Shantaram.

Offering an example of her dedication, Balani cited Jhanak Jhanak Payal Baaje (1955). The filmmaker apparently first approached Vyjayanthimala, but the actress, a rising star at the time, refused the low-budget project.

Shantaram, wanting to make a film along the lines of Uday Shankar's Kalpana (1948), needed a Kathak dancer who could dance in the pure form as opposed to the film dance that was popularly used. Sandhya rose to the challenge and began training with actor-dancer-choreographer Gopi Krishna in the pure Kathak form.

While shooting for the film, Sandhya did the performance in one take though the sequence is not shot in one take, astounding everyone on the sets. According to Balani, “V Shantaram was stunned with her performance and said he didn’t miss Vyjayanthimala.”

Many years later, Gopi Krishna, who was also the hero of the film, told Balani about Sandhya’s dedication, recalling that she would practise for up to 18 hours a day just to get her moves right. She even hurt her back during shooting.

But her hard work paid off and the film was a huge hit. After her astounding performance, audiences began to expect to see her as a dancer, and they had their wish fulfilled with such films as Navrang (1959), Jal Bin Machhli Nritya Bin Bijli (1971) and Pinjra (1972).

In the book V Shantaram: The Man Who Changed Indian Cinema, Shantaram’s daughter from his first marriage to Vimal, Madhura Jasraj, described the time when the filmmaker had a problem with his eyesight and was in danger of going blind. He was advised to keep a full-time nurse, but Sandhya insisted on taking care of him herself.

Madhura Jasraj wrote, “She [Sandhya] took over the job of nursing Shantaram with total dedication, efficiency and sincerity.” The filmmaker underwent eye surgery and was ready to have his bandages removed.

Jasraj has described the moment in her book: “Dr Banaji came to the studios and unrolled the gauze that covered his eyes. Vimal, Sandhya and all the children were anxiously watching him.... Sandhya had decorated the whole area with fresh flower garlands and exquisite rangoli patterns on the floor. Every corner was bedecked with colour, which Shantaram devoured with hungry eyes. The vividness of the colours overwhelmed him and, as if in a trance, he murmured the word ‘Navrang’ [new colours]. That became the title of his next film, which was released in late 1959.” 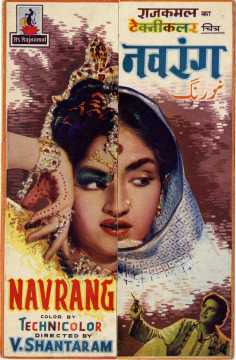 Completely dedicated to Raj Kamal studios, Sandhya never worked with another banner despite Shantaram allowing her to do so. In her book, Madhura Jasraj recalled that Sandhya stated, “No matter how much money I am offered, my loyalties will always lie with the institution that made me famous.”