Kamini Kaushal: Who has the ability, facility and opportunity to do so much? I’m very lucky

Photo: Rahul Sood
give your opinion

The word 'fun' comes up quite often during my conversation with Kamini Kaushal. You don’t get to 91 without having a sense of humour. There are times during the talk where it is easy to forget that this is one of the legendary stars of the golden age of Hindi cinema, who made her debut with the iconic film, Neecha Nagar (1946).

But there is more to Kamini Kaushal than just her acting career. The talented artiste wrote wonderful stories in Hindi for children in Paraag magazine and, during the 1970s, helmed a puppet show of her own creation on Doordarshan, becoming a pioneer in children’s programming in India.

Amazingly, these shows were produced and filmed right in her own house at Malabar Hill, Mumbai. When Cinestaan.com sat down with the renowned artiste at her home, Kaushal pointed out the area which was transformed into a makeshift studio.

“I had only Vidur, my [youngest] son, myself and one cameraman. Our own personal servants handled the lights and everything,” she said of her puppet shows made under her own banner, Gudiya Ghar Productions.

Rahul Sood, her eldest son, also produced the Doordarshan shows with his brother and mother. “She has a natural connect with kids. Even though she is an actress, she has always been a mom,” he said of her commitment to those television shows and bringing them to the right audience.

He explained that those early Doordarshan shows were part of the Satellite Instructional Television Experiment (SITE), an experimental programme between the National Aeronautics and Space Administration (NASA) and the Indian Space Research Organization (ISRO), which brought educational and instructional shows to the hinterland of India.

Gudiya Ghar Productions made shows like Chand Sitare, Hari Bhari Phulwari, Chaat Paani, and Chandamama on a variety of topics, getting inspiration from folk tales occasionally. They were dubbed in several languages for its audience.

This natural inclination to be highly imaginative was present in Kamini Kaushal as a youngster. Born Uma Kashyap on 24 February 1927 in Lahore, she made her own puppet theatre when she was 12 years old.

“I made my own puppets, built the theatre, and gave my first performance to my family. I’ve had a lovely childhood, very creative and very non-aggressive. You were left to your own devices,” she recalled.

Her home was a haven where everything was allowed for her and her siblings. “[She and her sisters] did everything that our brothers did. Nobody ever stopped us. No discrimination. Want to go swimming? Go! Want to play tennis? Play! Want to do some plays? Do it! The idea was do it!” she emphasized.

Kaushal, then still Uma Kashyap, was studying in the last year of college when she was offered a role in Chetan Anand’s film, Neecha Nagar (1946). She turned him down.

Her brother, who was also her guardian after their father’s [botanist and professor Shiv Ram Kashyap's] death, had no objection to her acting in films. In fact, the Kashyap family used to make their home movies in 35mm, which Kaushal was part of as a young girl.

Kaushal said the film “had a perceptive subject. It was interesting, at that time, the way he [Anand] projected it.” As a young woman who had grown performing on stage and doing radio plays, the transition to films was not difficult for her, but after she filmed Neecha Nagar at Mohan Studios, Kaushal went back home. She returned to Bombay after getting married.

“Then they kept pestering me, they found out where I was. I shooed them off. I said, ‘I don’t like to work in films.’ Then one day, Mr [Gajanan] Jagirdar sent somebody. I had seen Ramshastri (1944). I had hardly seen five Hindi films when I came into the film industry and it was like, ‘Oh, it’s that guy, he made a damn good film'!” she recalled.

Kaushal’s husband, BS Sood, too did not have any objections and she signed a few more films, including Aag (1948) with Raj Kapoor.

When reminded the three films she worked on in 1948, Shaheed, Ziddi, and Aag, are turning 70, Kaushal said they were all good films.

“We set a different style of work. Our gang, our group, we brought a kind of a naturalness, like every era. Nowadays, it is dhamaal. Everything is special effects, very dramatized and swift. Girls are smarter, they think smarter. They are as good as boys. Why should they be anything different?” she remarked.

Later, she remembered filming Ziddi’s first scene with her young hero, Dev Anand. “He stood in one corner, scratching the floor with his toe constantly looking down. I said, ‘Is the guy ever going to say hi to me or what? I kept sitting in my corner, and he kept sitting in his corner. So it was really funny,” she laughed at the memory.

She was adamant that she would never go and ask anyone for a role. “I never had to fight for a role as such. I got good assignments and they thought I could really deliver, that’s why they asked me to come.”

Kaushal would have almost missed out on one of the standout films of her career, Biraj Bahu (1954), for which she won her only Filmfare award for Best Actress. Her co-star in the film, Abhi Bhattacharya, pleaded with her to lobby for the role with director Bimal Roy, but she refused.

“Why would I pester him, unless he owes me something? He doesn’t owe me anything. But Abhi came pestering me. ‘Ah, Kamini, what are you doing',” she said.

But eventually Roy did call her for the role. She had a wonderful time working on the film and oftentimes, the director would shoot scenes with rehearsal, she said.

“I was so much in character. I knew the personality of [Biraj], and [Roy] knew that I could deliver. And he would never take a retake, not if he felt I had done it okay. I knew what he wanted. We were really on the same wavelength. That was such a treat. It’s such a delightful way of working.”

She spoke of a different time when actors and actresses of the Hindi film industry all worked together without any airs. “It’s not like you were a star, nothing of the sort. We just did our job," she said.

"First couple of weeks we did some rehearsals in Bandra. There were hardly four or five blocks of houses there, that’s all. I just used to run from the station to the house. I would be sitting in my compartment with my feet up and not a soul there. Catch anybody having the train belonging to them today!” she laughed.

The actress recalled several incidents of mirth from her youth, including the time when she pulled Ashok Kumar’s hair when he was a chief guest at her college function in Lahore.

“He had come collecting funds for the war fund. After that show, I came down and I was in college, but I was like a schoolgirl. I wasn’t that sophisticated and prim and proper [or] ladylike. I stood behind him and kept pulling his hair. When I think of it, how mad I must have been! I don’t know what prompted me,” she burst out laughing at her own behaviour.

When they worked together a few years later on Poonam (1952), she reminded Ashok Kumar of their first interaction. 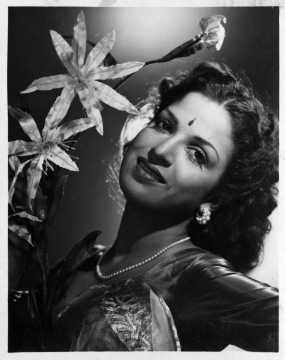 She wrote around 17 pages a month for the magazine, also running a club for children and penning a newsletter. For her, Kaushal said, it was a full life, away from the camera lights and studios. It gave her fulfilment, “Not proud, [but] I was involved. It’s like a feeling of you have done it. It gives you a high that you can achieve that kind of a feeling.”

She said observing children and their likes was her inspiration and that helped her guide children into thinking for themselves. Fond of crafts from an early age, Kaushal also made her own puppets to entertain children. “I wanted them to enjoy them, because I enjoyed making them,” she said.

On her shows, it was all her doing. She painted the backdrops, voiced each puppet, and created imaginative stories like the show, Chandamama. At a time when there was little content aimed at children, Kaushal was thinking ahead to provide them with the ‘fun’ they needed in their lives.

“[Most children’s programming] was like a speech, a sermon. Give them a bhashan and sing some shlokas for them. Where was the fun? Many people asked me to give these programmes to them. But I gave them to Doordarshan, [for] maximum exposure. Everybody will be able to see them. I run into them now. We used to fight for the best seat when the programme was coming. 'We would wait for your programme'. That makes my day. This is something I really enjoy, it was from the bottom of my heart,” she said.

Looking back, Kaushal said, it was all a happy time. “Who has the ability and the facility and the opportunity to do so much? I’m very lucky. And to find a husband who let me do what the hell I liked.”

She hasn’t been to the theatre in ages. What she sees of Indian films today, she is not charmed. But, as she said, it is difficult to compare the two eras.

Two years ago, the actress was awarded the Lifetime Achievement honour at the Filmfare awards and even acted in a short film, #FirstSunday, which was a finalist for the 2017 Filmfare Short Film awards.

Yet, she said, she is hesitant to act in a project. “I don’t feel inspired because their whole style is different. What I convey more conveniently and refreshingly is something that is not valued these days much. Your values have changed. So why put your foot into it?” she remarked.