In an old television interview, the legendary actress also tells viewers why the accident that hurt her career failed to deter her spirit.

Lalita Pawar’s career as an actress spanned an unbelievable 70 years in which she acted in almost 700 films. After making her debut in YD Sarpotdar’s Raja Harishchandra in 1928, she acted in her last film, Laash, in 1998. She died on 24 February 1998, less than two months after the film’s release.

Yet, Lalita Pawar, born Amba Sagun, was once completely innocent of the medium of cinema. In an old interview aired on Doordarshan in the Anmol Ratan series, the actress recalled, "When I first went to watch a film, I don’t even remember its name, I thought it was a Ramlila show. At home they used to say, ‘We should go to the picture.’

"When we went inside, I saw it was a big hall and it was dark. There was a screen. Men and women sat separately.

"I couldn't understand why the place was dark. I wondered how Ramlila can be performed in the dark." 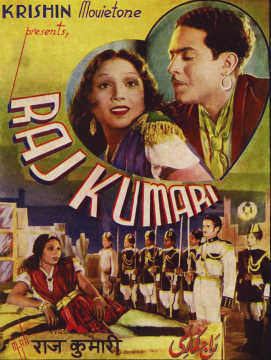 Then a few advertisement stills began appearing on the screen. But young Amba got the shock of her life when the main show began.

“We saw a few people," Pawar recalled. "Sometimes we saw somebody’s neck, face, hands, different parts of the body. I was frightened! I wondered how 'broken' people were taking part in Ramlila. This never happened at our place. I ran outside!”

After confronting the person operating the projector, she got invited to visit a place where films were being shot. When she reached the place the next day, the curious girl had a minor accident and hurt her hand on the sets. Director Sarpotdar, who was shooting the film, and others came to her aid. But Amba didn't care about the injury; she was astonished to see something else.

“The people whom I had seen in bits on screen were complete here," she recalled. "None of their body parts were cut.”

She told Sarpotdar she was frightened to see parts of people on screen and had come to see the Ramlila. Hearing this, the director offered her a role in his film, saying, “Will you work in the Ramlila?” Pawar agreed and took him to meet her aunt, with whom she was staying at the time. Thereafter, she shot for 6-7 days. 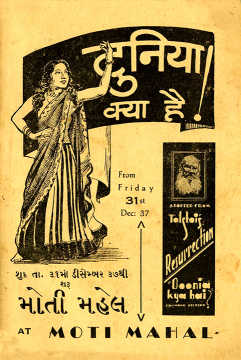 One day Amba's father, Lakshman Sagun, came and asked her to return home with him. She told him she had been working in a Ramlila and decided to show her work to her father and also inform Sarpotdar that she was leaving.

The director was upset to know she would be leaving the shoot midway. Amba was confused as she did not know that a film needs many days of shooting. “We always completed Ramlila in just one day,” she said.

Sarpotdar finally made the girl's father understand that they had, so far, made only half the story. Her father understood and let her stay to complete the shooting at a monthly salary of Rs18.

However, an accident on a set put an abrupt end to her career as a leading lady. While she was shooting for Jung-e-Azadi, a scene required stunt actor Master Bhagwan, later to become popular as the comedian Bhagwan Dada, to slap her hard. But the actor slapped her in reality, which resulted in a blood vessel in the left eye bursting. “Next day I got [facial] paralysis and we returned to Bombay,” she recalled.

She lost the role as the shooting would have been stalled because of her condition. “This got published in all newspapers. This ensured that all my contracts got cancelled. I remained sick for two years,” she said.

But she got a pleasant surprise from the makers, Hans company, of her upcoming film Amrit / Amrut (1941). “They didn’t cancel my contract. They said while I am not well, they will work on other films. We will shoot the one with you later. They did a film called Brandi Ki Botal / Brandichi Batli (1939). When I resumed working after two-and-a-half years, I started working on Amrut first. They said only I will do this film and nobody else,” she said.

Pawar started receiving offers regularly after this film, but for supporting roles. “I didn’t get roles as a heroine. I got character roles. And I am still doing character roles,” she joked. She began playing mother to artistes like Raj Kapoor, Dev Anand and Dilip Kumar, who were not much younger than her.

The actress believed that though the incident was unfortunate, it opened new doors for her. As a character artiste she received more fame and became a household name. As she said in the interview, "One should look at the strength of a role, instead of the length."

Pawar was honoured as the First Lady of Indian Cinema by the government of India in 1961.

Watch the two parts of the interview here: