Sanyal, born on this day (22 February) 112 years ago, gave up his engineering course to pursue his passion for music.

Pahari Sanyal, one of the finest character actors of Bengali cinema, had comprehensive knowledge of both acting and music.

Born in Darjeeling, Sanyal was a bright student of engineering at the Banaras Hindu Universtity. However, his passion for music prompted him to quit studies midway and join the reputed Marris College of Music in Lucknow, now known as the Bhatkande Music Institute Deemed University.

Barrister Atul Prasad Sen, songwriter and a close friend of Rabindranath Tagore, was then based in Lucknow. “Sanyal was a favourite student of Sen and he was eventually instrumental in popularizing Sen's songs,” scriptwriter and film critic Kantiranjan De said.

De recalled, “When we were in school in the 1970s, Sanyal would regularly write on Sen in Desh magazine. I wonder why nobody takes the initiative to publish those writings in a book.”

In 1932, Sanyal reached Calcutta and was introduced to the filmmaker PC Barua through his cinematographer friend Krishna Gopal. Soon, he came across Debaki Bose and started working for New Theatres at a salary of Rs150 a month.

According to Sanjay Mukhopadhyay, former professor of film studies at Jadavpur university, "Pahari Sanyal was the last representative of the singing actors. The trend of playback singing was already emerging in the 1940s. Sanyal had amazing command of Hindustani classical music. It is well known that Pandit Bhimsen Joshi worked as a cook for him for a few days."

In the 1950s, Sanyal shifted to playing supporting roles. "We have seen that generally the father figures in the romantic melodramas of those days were extremely ill-informed," Mukhopadhyay said. "They had no idea of their son's or daughter’s relationship till the climax, when they would use their authority to approve or disapprove of the relationship. Apart from the familial system of our country, these characters did not have much relevance to the story.

"However, Sanyal’s contribution was to make those characters important. His crafted innocence in his portrayals of the character of father in Deya Neya (1963), Jaya (1965) and Aradhana (1969) are worthy of mention. While it was extremely difficult to do something tangible while enacting those characters, Sanyal still managed to make them quite memorable."

De said Sanyal was a very natural actor. "In those days, most actors were from theatre and were generally loud in their performances. Jahar Ganguly, Nitish Mukherjee can be named in this regard. Whereas Pahari Sanyal, Chhabi Biswas, Tulsi Chakraborty’s acts were much more subdued in front of the camera. Hence, they were Satyajit Ray’s favourites," he said.

Ray cast Sanyal in two films, Kanchanjungha (1962) and Aranyer Din Ratri (1970). Ray also made Sanyal sing in the latter film. "There was a sequence of a morning in which Sanyal sang Atuprasad Sen’s 'Ke Dake Amare Sokal Byalar Sure', engrossed in himself while sitting on the balcony," De recalled.

"Even in serious roles, for example while playing Bibek in Marutirtha Hinglaj (1959), Sanyal’s facial expressions were extraordinary. Sanyal belonged to an age of celluloid when facial acting had special significance," Mukhopadhyay added.

Reflecting upon Sanyal’s dialogue delivery, the professor said, "As Sanyal was well versed in music, he could articulate his voice in such a way that his dialogue delivery was very rhymed and rhythmic. This was quite uncommon in actors in those days. I think Sanyal is the finest actor of the pre-dubbing era who could manipulate his voice a great deal.

"Sanyal is also one of the actors of the declining era of film studios. He belonged to the glorious age of New Theatres. With him, a transition in modern filmmaking emerged."

According to De, Sanyal did not have a very happy conjugal life. "His first wife died and his compatibility with his second wife Meera Devi was not good," the critic said. "Therefore, perhaps, he was a little temperamental. However, Sanyal enjoyed indulging in good clothes and appreciated the finer things in life.

"In [filmmaker] Bikash Roy’s book Kichu Smriti Kichu Kotha [Some Memories Some Stories], I have read that one of Sanyal's fans presented him a namavali [a cloth with the names of gods printed all over] after watching one of his performances. Everyone thought the namavali will not be of any use to him since he was not a religious person.

"In those days, actors used to have addas [gatherings] on the second storey of Basusree cinema hall. One evening, Sanyal surprised everyone by wearing a kurta tailored from the gifted namavali. It might seem quite normal now, but in those days nobody used to wear namavali printed attire." 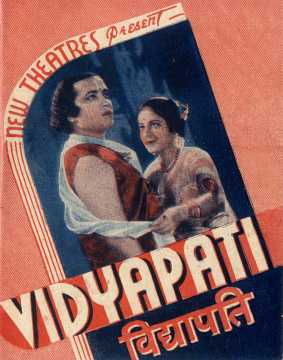 Remembered for his iconic renditions in Chandidas (1934), Karwaan-e-Hayat (1935), Bidyapati / Vidyapati (1937), Sapurey (1939), Rajat Jayanti (1939), Shap Mochan (1955) and Saheb Bibi Golam (1956), Sanyal was a scholarly person. His fluency in Urdu, Persian as well as Bengali and Hindi made it quite easy for him to perform in both Bengali and Hindi films as well as in those that were shot as bilinguals.