The film directed by Tarun Mansukhani was earlier supposed to be released during Holi on 2 March.

There were unconfirmed reports last month about Drive, starring Sushant Singh Rajput and Jacqueline Fernandez, being postponed to a later date as the film is still in the making.

Now, the makers have officially announced that the film's release has been postponed from 2 March to 7 September.

This also means the film will not clash with Anushka Sharma’s production Pari, where she also plays the main lead.

The horror flick was earlier supposed to be released on 9 February, but was postponed to 2 March after Akshay Kumar’s biggie Pad Man grabbed the February date. 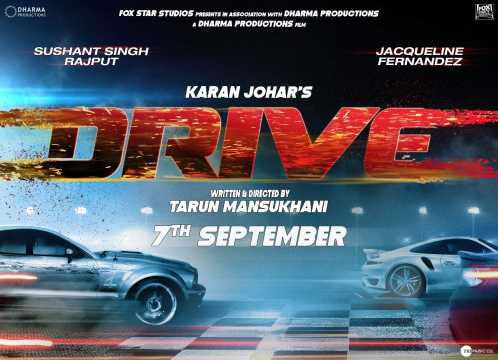 Produced by Karan Johar's Dharma Productions and Fox Star Studios, Drive is the first film in which Rajput and Fernandez have been paired.

The film's plot has so far been kept under wraps. The makers have only released a poster in which a few racing cars are seen on a race track. The title and the poster suggest that there will be a lot of action in the film.

This is Mansukhani’s comeback after his directorial debut Dostana (2008), which was released a decade ago. In between he made the animation movie Koochie Koochie Hota Hai, but the film is yet to be released. The film was an animated take on Karan Johar’s blockbuster Kuch Kuch Hota Hai (1998).

Mansukhani was also in talks to make a sequel to Dostana, but the film never got past the scripting stage.