To be directed by Ali’s younger brother, Sajid, the love story will be released on 4 May 2018.

Imtiaz Ali’s Jab Harry Met Sejal (2017) may not have won over audiences, but that isn’t deterring the filmmaker from making any more love stories. He is joining hands with producer Ekta Kapoor for Laila Majnu, to be directed by his younger brother, Sajid Ali.

Kapoor shared the news on Twitter, stating, “Recreated. Re-imagined. Retold. Proud to collaborate with Imtiaz Ali to present a classic love story with a contemporary twist.”

Recreated. Re-imagined. Retold. Proud to collaborate with Imtiaz Ali to present a classic love story with a contemporary twist. Here's the teaser poster of #LailaMajnu, which will be out on 4th May. @balajimotionpic #ImtiazAlisLailaMajnu pic.twitter.com/4Y2w0L6tQI

The story of Laila Majnu is a familiar one for Indian cinema. Since the first 1922 silent version, it has been adapted a number of times on the big screen. The most memorable one was the 1976 version, directed by Harnam Singh Rawail, starring Rishi Kapoor and Ranjeeta. Interestingly, Imtiaz Ali’s 2015 film Tamasha featured Ranbir Kapoor’s character reciting a song from the 1976 film. 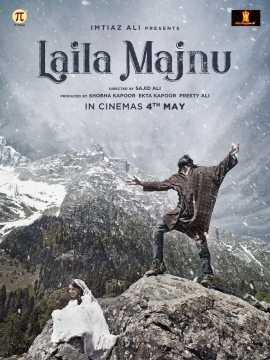 Laila Majnu, which is also produced by Imtiaz’s ex-wife Preety Ali, is due to be released on 4 May 2018. Starring newcomers Avinash Tiwary and Deepthi, the film will be Sajid’s directorial debut.