On his 29th death anniversary (he died on 12 February 1989), we remember one of Sharma's everlasting hits with the title song for Raj Kapoor’s passion project, Satyam Shivam Sundaram (1978), which turns 40 this year.

Originally from Uttar Pradesh, the poet Pandit Narendra Sharma got his master’s degree in English literature from Allahabad University in 1936.

As a young man, inspired by Mahatma Gandhi, he became part of the Quit India Movement in 1942 and was arrested.

In prison he was inspired to write several poems, including a Katha geet titled ‘Kamini’. The next year, 1943, he came to Mumbai (then Bombay) where he became a lyricist for Hindi films. 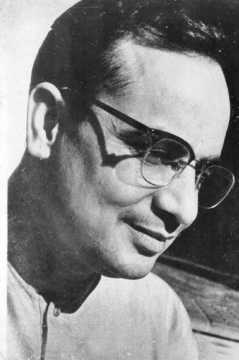 Narendra Sharma's first book of poems, Shool – Phool was published when he was just 20. And he became a lyricist at Bombay Talkies after the departure of Kavi Pradeep, working on such films as Hamari Baat (1943), Devika Rani’s last film, and Jwar Bhata (1944), Dilip Kumar's first film. He also wrote for Navketan’s Afsar (1950) for music composer SD Burman.

One of the poet's most popular songs was ‘Jyoti Kalash Chalke’ from Bhabhi Ki Chudiyan (1961). His lyrics were influenced by several languages, including Urdu and Sanskrit.

Despite his impressive background, however, Pandit Narendra Sharma is best remembered today for the timeless lyrics he wrote for Satyam Shivam Sundaram (1978), sung by Lata Mangeshkar and Manna Dey.

The singer and the lyricist shared a close bond; he was often present during the recordings. Mangeshkar considered him a father figure and Sharma felt his songs were appreciated even more because of her golden voice.

Filmmaker Raj Kapoor was originally inspired by Mangeshkar to make Satyam Shivam Sundaram. At one point, he had thought of making the film with her in the lead.

But in the mid-1970s, the once-solid relationship between the two faltered during the making of the film. Raju Bharatan wrote in Lata Mangeshkar: A Biography: "Raj Kapoor made the cardinal mistake of stating, for the benefit of the gossip glossies, that it was the story of an ugly girl with a beautiful voice. Could Lata Mangeshkar be blamed for interpreting this as a pointed reference to her, looking to how her vocals had been the original inspiration for the 'Satyam Shivam Sundaram' theme?”

Further he wrote, “The invitation to her favourite poet, Narendra Sharma, to write the theme song for the film had led her to expect something quite different. Lata anticipated that the theme would be a fusion of emotion and vision, [but] it was turning out to be a fusion of vision and passion. Lata never felt at ease after this in recording anything for 'Satyam Shivam Sundaram'."

Already uneasy with the choice of Zeenat Aman as actress, who didn’t fit her idea of the lead character, Mangeshkar delayed the rest of the recordings because she was not receiving her usual 2.5% royalty from Kapoor.

In a radio interview with Sonu Nigam, Mangeshkar later revealed, “Raj Kapoor [had] said if all stars come to us and start asking for royalty, you think we will give them? But I was adamant and Raj Kapoor had to finally give in. Actually, during the making of Satyam Shivam Sundaram, Rajji told me he wanted Hridaynath Mangeshkar as music director since the music in the film was classical. To which I said OK and I had to leave for the US on a music tour. I don't know what happened, but the film was eventually given to Laxmikant Pyarelal. I spoke to Rajji about this and I was very angry and decided that I would not sing for the film."

In the film, the title song is picturized on Zeenat Aman as a new day begins and she cleanses the temple for worship. The words ‘satyam shivam sundaram’ translate to truth, divinity and beauty. Besides the main theme song, Sharma wrote four additional songs, including the classic ‘Yashomati Maiya Se Bole Nandlala’.

Sharma received his only Filmfare nomination in 1979 for the title song from the film. Anand Bakshi won the trophy for ‘Aadmi Musafir Hai’ from Apnapan (1977). However, music directors Laxmikant-Pyarelal picked up their fifth Filmfare award for Best Music Director. The duo won the award for four consecutive years from 1978 through 1981.

Author and professor RP Chaturvedi wrote of the poet in his book, Great Personalities, “In Pandit Narendra Sharma's songs, we can see the majestic glimpses of natural beauty, patriotism and Bharatiya culture. In the film Satyam Shivam Sundaram he has given the message of unity in a language which is simple, easy and of good taste.”