Pad Man Lakshmikant Chauhan (Akshay Kumar) laments the lack of sanitary napkins for women as a family celebrates their daughter’s coming of age.

When a film centres on an unconventional subject such as menstrual hygiene, the lyricist has a tough time writing the songs for it. After all, the lyrics cannot be simple poetry. Nor is the music director expected to churn out ballads.

Credit to lyricist Kausar Munir, for she has managed to write songs that go with the ethos of a film like Pad Man. The title song was thoroughly entertaining.

Munir and the makers of Pad Man launched the 'Sayaani' song today, which features a family celebrating its daughter reaching the age of puberty.

Munir uses the butterfly as a metaphor to explain the situation in a wonderful manner. Just one word, sayaani, or mature, is enough to explain what is transpiring in the song.

In India, various communities have traditions to celebrate the girl child getting her first period. But how many families give their daughters sanitary napkins? 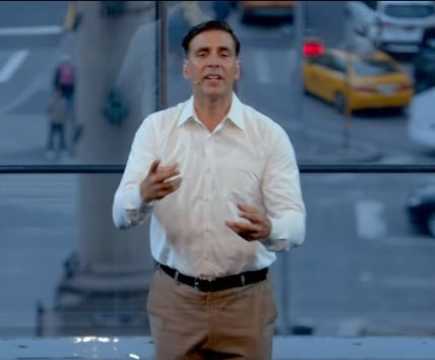 Lakshmikant Chauhan (Akshay Kumar) learns from little childen how people use different code words to talk about periods. Out here the first period is likened to a 'Test match'. Later, Chauhan uses these very cricketing terms to explain how many women play this 'Test' without access to sanitary pads.

With a serious issue at hand, one can never judge such songs through conventional methods. Music director Amit Trivedi deserves credit for roping in various female vocalists. Yashita Sharma is the first name that appears in the credits. Perhaps hers is the voice behind the wonderful mukhda (intro) before Jonita Gandhi, Yashika Sikka and Rani Kaur join in.

Then we have Anita Gandharva, Meghna Mishra and Vaishnavi Mishra providing additional vocals. One can barely hear the many voices, however, for this video is just over a minute and a half long. The extended version may give us a better idea of the collective effort.

The song, though, deserves a thumbs up for it spells out its message clearly. Or, in Pad Man parlance, we can say "chums up" to 'Sayaani'. Watch it here.

Pad Man is set to be released on 9 February. Click here to try and predict the film's box-office performance.