On the actor’s 83rd birthday today, an excerpt from his biography by journalist Rajiv Vijayakar examines how Dharmendra rose to stardom.

The floodgates finally opened for a torrent of films that suddenly placed Dharmendra right at the forefront, among the big heroes of that era — Dilip Kumar, Dev Anand, Raj Kapoor, Shammi Kapoor, Rajendra Kumar, Sunil Dutt and Raaj Kumar. This was also the last-burst-of-glory phase for Pradeep Kumar, while Manoj Kumar, Shashi Kapoor and Jeetendra had already earned their first hits.

And Dharmendra came up with eight big films in Hindi. Apart from his first Bengali film, Paari, also being a hit.

For any newcomer, all this could have been too heady. Success could have been too intoxicating — destructively so. It could have turned Dharmendra’s head, made him arrogant, and ultimately stymied his growth as a human being, actor, star and icon. Lesser icons across the board — actors, composers, singers and film-makers — have amputated their careers with the short-lived but intoxicating elixir of sheer arrogance bred by immense success.

Dharmendra seemed to follow to the hilt a song Anand Bakshi was to write for him in the late 1980s — ‘Apne dil mein josh hai / Apna khoon garam hai / Karam hi dharam hai / Karam hi dharam hai [There is zeal in my heart, my blood is racing and my credo of life is work, work and work]!’ The josh (spirited enthusiasm), the garam khoon (hot-blooded fervour), the karam (deeds of duty) and dharam (credo of life) merged into an exhilarating and galvanizing ride into the future.

You could well have replaced Karam Hi Dharam Hai with the words Karam hi DHARAM hai! Since from that period on Dharam would mean nothing but Karam.

Dharmendra was well past the ‘Flat and Fiat’ stage. He had earned the love of both viewers and industry associates, and so there was no way the blitzkrieg could slow down now. The rollercoaster had begun, and Dharmendra not only had to enjoy the ride, but try and make sure that he did not lose everything he had earned through his hard work, as the momentum accelerated. The 1966-75 decade thus was the golden period of this star’s acting career. 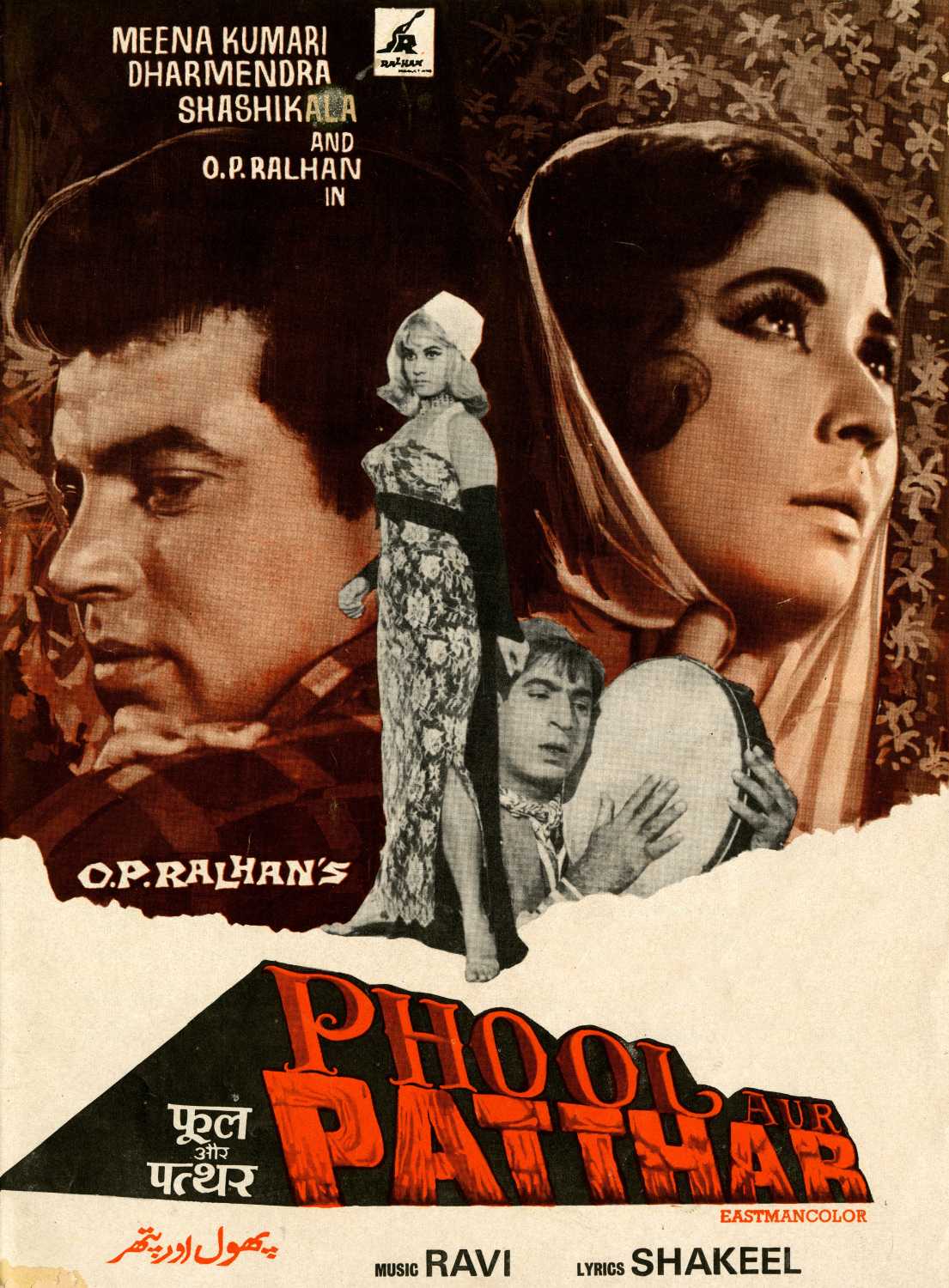 Phool Aur Patthar, as pointed by the actor, was the Sholay of its time. Everything just fell into place due to the sheer force and extent of its impact. The actor takes some credit for the sequence in which he removes his shirt, not to show machismo, but to cover the frail and poor woman (Leela Chitnis, the former singing star actress of the 1930s) his character Shakka had adopted as his mother.

Modestly, Dharmendra admitted, ‘Film-makers would listen to my suggestions frequently. I thought this gesture would be a nice emotional touch.’

However, most of the current generation chose instead to recall the sequence in which Meena Kumari, rescued by Dharmendra and a guest in his house, pretends to be asleep as her host-cum-benefactor comes in drunk and bare-chested. Kumari realizes that he is inebriated, and fears the worst when he enters her room. But he only leans over her to check whether she is asleep, and gently covers her with a blanket. 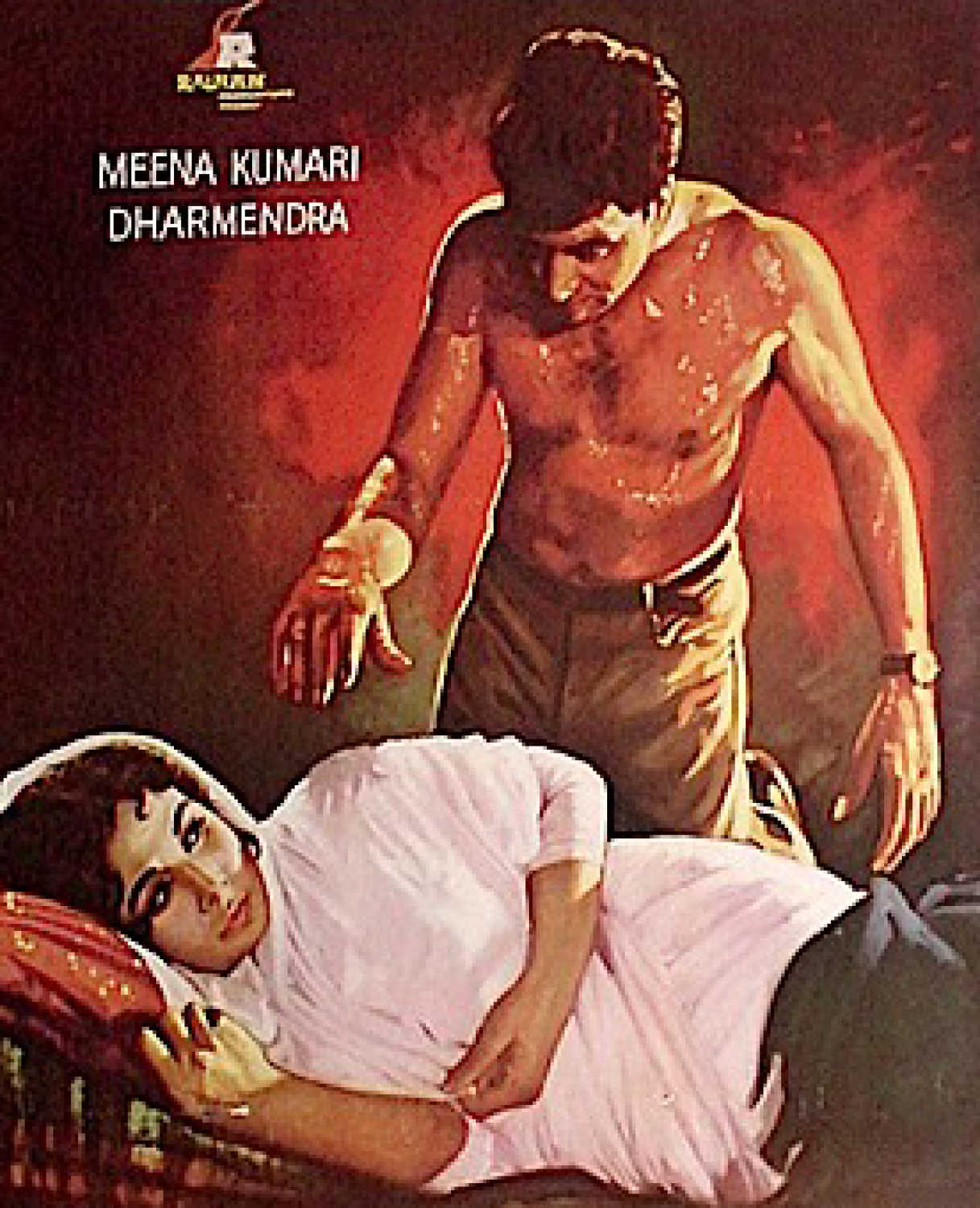 What people could not have foreseen, however, was that this very sequence, over time, would come to be considered the foremost symbol of masculinity and virility in Hindi cinema. With just one scene, Dharmendra became the He-Man of the Hindi screen. He was at once the protector of women and the innocent son to them.

When Salman Khan removed his shirt in his films over two decades later, he was, therefore, said to be merely following in Dharmendra’s footsteps. It was Garam Dharam (literally translated as ‘Hot Dharam’) who would always remain the trailblazer!

And as they say, destiny is supreme. Dharmendra made this grade despite the fact that Sunil Dutt had been [producer-director OP] Ralhan’s first choice for that rough and tough role. And midway through the film, Ralhan and Dharmendra had had temporary but serious differences, to the extent that the actor had almost thought of quitting the film because of what he considered Ralhan’s arrogance. He had even told his mother in that weak moment that he felt like quitting the industry.

In this context, it is of passing interest to note that in the late 1970s, Ralhan had been signed to direct the 70mm Samson And Delilah with Dharmendra and Hema Malini. But the film did not even take off.

Phool Aur Patthar became Dharmendra’s first movie to be the biggest hit in any year. What’s more, the film earned the Best Actor female and male nominations for Meena Kumari and Dharmendra, his first as a leading man, from Filmfare, the same magazine that had mentored his debut. For the record, he had also been nominated as Best Supporting Actor earlier for Ayee Milan Ki Bela (1964).

Some more Filmfare nominations followed in later years (for Mera Gaon Mera Desh in 1971, Yaadon Ki Baaraat in 1973, Resham Ki Dori in 1974, and Naukar Biwi Ka in 1983), but Dharmendra finally won a Filmfare Award only in 1990, and that was for being the producer of the Best Film — his maiden official production Ghayal! (Dharmendra had ghost-produced or financed many films before it.)

Ironically, the first acting award he won from the magazine was in 1997 — the Lifetime Achievement award, which was the first of many such trophies from other organizations.

Excerpted from Dharmendra: Not Just a He-Man by Rajiv M Vijayakar with permission from Rupa Publications. Click here to buy the book.