The Na Bole Wo Haram director and screenwriter Aditya Bhagat speak about the concept, screenplay and challenges as first-time filmmakers.

Nitish Vivek Patankar and Aditya Bhagat are 22-year-olds whose short film Na Bole Wo Haram was screened in the non-feature section of the Indian Panorama at the recently concluded 49th International Film Festival of India (IFFI) 2018 in Goa.

Na Bole Wo Haram cleverly uses its young protagonists to comment on how adults twist everything to their convenience. The story is about two school friends Pashya (Aadesh Sawantrao) and Aseem (Raghav Vartak) who come up with their own idea of what's wrong and right in the eyes of god.

The easy and light screenplay, with a generous scoop of humour, makes the film an enjoyable one.

The young filmmakers are theatre enthusiasts from Pune and dabble in audio books, feature films and ads. We caught up with the visibly excited Patankar and Bhagat at IFFI as they basked in the glory of their first film being screened to a houseful audience. Excerpts:

How did you come up with the concept of Na Bole Wo Haram?

Nitish: The concept came to me when I heard of the incident in Peshawar in which militants attacked a school. Then I thought of the mentality behind these acts of terrorism. There is a common thought process that we as human beings use anything and everything for our self-interest, be it religion, caste, god. We haven’t even spared god.

I and Aditya came up with this concept about portraying this mentality through two schoolgoing boys. The juvenile boys are a perfect representation of human beings because they are still learning new things and that was the best part of making this film.

From the concept, how did you develop the story and screenplay to convey your message in just 20-odd minutes?

Nitish: I had a structure in mind and shared it with Aditya. He then built things around it and actually unfolded the structure and gave it something that made it the current film.

Aditya: The basic need of the screenplay was to ease the content to understand this topic in writing. This was the main part while writing the screenplay and dialogues. We have been working together for 6-7 years. So we understand each other more. We both know what the other is thinking. When I write something, we know we are on the same page. So we don’t have to struggle to get on the same page.

While writing the screenplay, the biggest problem was to maintain the pace of the film. The film takes place over 2-3 weeks. To contain this time in 20 minutes was a difficult task, especially locking the scenes.

The humour in the film is quite subtle. The character of the teacher [played by Amar Gaikwad] is quite sarcastic. Who came up with the characters? Where did you find the actors?

Aditya: To ease the content, you need humour. If your topic is serious, and you show it in a serious manner, no one will like it. You have to make it subtle. The characters are the key points of any story, as they make the story. Every character should be memorable after you watch the film.

Nitish: The characterization credit goes entirely to Aditya. The guy who played the teacher made many improvisations. Most of the actors are from our theatre groups. There is an extremely active theatre circuit in Pune where we live. So there is never a lack of good actors. We found the two young protagonists by auditioning at different schools in Pune. 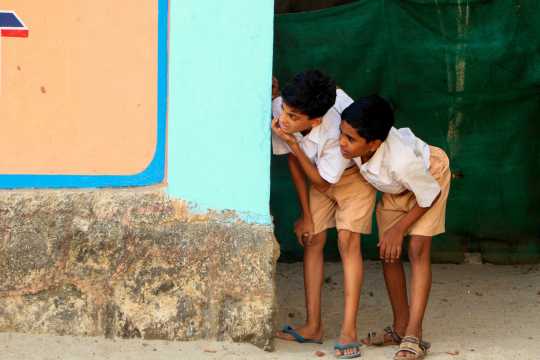 As 22-year-olds now, how and when did you decide to make films?

Aditya: All the credit goes to theatre. We have been doing theatre for nearly 10-12 years, that’s half my life right now. Most theatre artistes dream of being filmmakers at some point in their lives. Theatre was a big push for us as filmmakers.

Nitish: For me, it’s slightly different. I have some stories. We are just 22 years old and in my opinion we are just exploring different mediums to tell our stories. Aditya is also writing an audio book right now. I also make ad films. We have done a couple of feature films with legendary people also.

Till now we have explored cinema and I believe I have some connection with cinema because there is no limitation to telling stories in cinema. We can have live action, animation. I am also writing an animated short film. It’s all about exploring new mediums to connect with the people.

New filmmakers always complain about how difficult it is to get their film out to people. What kind of challenges did you face while making Na Bole Wo Haram?

Aditya: We were completely focused on making the film. We did not know we could come here [IFFI] and see our film with many more people. But yes, that was a dream to watch it with people.

Nitish: At the stage that we are, if you are making a film it does not have to be technically supreme or anything like that. You have to tell your story with conviction.

Nowadays, people are making some bigger films also with their smartphones. We have technology in our hands and our pockets, so that’s not the bigger challenge. The bigger problem and challenge is your perspective on an insightful topic. Anyone can keep a camera in one place and shoot anything and that can be a film. You have to give it a perspective that no one else can give. That becomes the output you have created and that is your film.

How did IFFI happen?

Nitish: As Aditya said we were just focused on making the film, but I have invested nearly Rs3 lakh in making this film. We are still trying new avenues to get the money back and also to show it to more and more people. We got to know about IFFI and came to know it was a big festival. We just registered, there was nothing to lose. We got selected!

How does it feel that your film found space in the Indian Panorama non-feature section with some accomplished filmmakers?

Nitish: When we came to IFFI, we got to know that our show is already a full house. It was overwhelming for us. Even our teammates couldn’t get in. We realized that it is good in a way, but it is a great responsibility for our future projects. We have set standards for ourselves now and we have to keep improving. Of course, sharing the dais with veteran filmmakers is nothing but a dream.

Aditya: We are planning to make a feature film in Marathi and we’re discussing that right now.

Anything you would like to say to fellow young filmmakers trying to make their first film?

Nitish: Just do it. Dare to tell your story to people. Don’t care about the camera, equipment or locations. Just try and give it a perspective that no one else can give.

Aditya: According to me, the choice of the creator also matters. Choice in the sense that you can't always tell a simple story. Na Bole Wo Haram could be a play or an audio book. It is a film right now. You have to choose the medium to perform your story. That also matters. If Na Bole Wo Haram would be a play, it would be on some other level. When I create stories, I first think about which medium would they best suit.

Na Bole Wo Haram was screened at the 49th International Film Festival of India (IFFI) 2018 in Goa on 22 November.