The Loveyatri (2018) actor is in talks with producers Prernaa Arora and Ahmed Khan, to play an underworld don in the Sanjay Dutt-starrer gangster-film.

Salman Khan launched his brother-in-law Aayush Sharma with the romantic saga Loveyatri (2018). While Sharma’s debut didn’t yield desired results, he has now reportedly bagged his next project. It’s going to be a radical transformation for Sharma for after playing a simple, garba teacher in his maiden film, he will tread onto the dark lanes of Mumbai in his second outing.

Sharma is likely to play a character inspired by underworld don Dawood Ibrahim in his next, Bombai, that also stars Sanjay Dutt.

As per a source, Sharma has signed on the dotted line. Earlier, at the launch of the new production house, Studio Five Elements, Bombai was announced as one of the projects in the pipeline.

When Cinestaan.com contacted Sharma, he confirmed that he is in talks with the producers.

“I’m in talks with the production regarding the role. We’re still in talks. Will hopefully make a formal announcement soon,” Sharma said via a text message.

Prernaa Arora of Studio Five Elements, too, confirmed of being in talks with Sharma.

"It's too soon to talk about it but yes we've signed Sanjay Dutt for this film and have met Aayush Sharma. Since it's a gangster film we could think of no one better than the legendary Sanjay Dutt, whereas Aayush seems very promising and has great screen presence," said Arora. 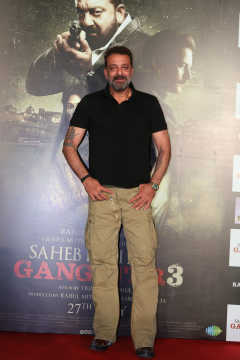 The gangster film will be directed by Adnan Shaikh, the chief assistant director to Ahmed Khan. As reported earlier, Bombai chronicles the story of the underworld in Mumbai. Dutt will play the late underworld don Karim Lala. Bobby Deol, too, is said to be a part of the film and his character is touted to be inspired by Tony Montana, Al Pacino’s famous character from the gangster drama Scarface (1983).

Bombai is co-produced by Studio Five Elements and Paperdoll Entertainment.