Sara Ali Khan: You need to have a body of work for stardom


While she has been appreciated for her maiden film Kedarnath, the young actress does not want to be swayed by the adulation coming her way.

If Ayushmann Khurrana was the toast of October, the beginning of December saw everyone go gaga over Sara Ali Khan.

Saif Ali Khan and first wife Amrita Singh’s daughter has been appreciated for her confident act in her debut film Kedarnath, which was released on 7 December. And she is already back on the big screen, romancing Ranveer Singh in Rohit Shetty’s action drama Simmba, which was released yesterday.

The beautiful Sara Ali Khan carries herself with the same confidence off screen that she projects on screen. While 'blunt' might be too harsh a term to describe her style, her candidness has won over the media. After all, when was the last time you heard of a young actress inviting the paparazzi over for coffee?

All this may well be part of a well-coordinated campaign driven by an excellent PR team, but there is no mistaking her sincerity in personal interaction. So, while critics are singing her praises, the young lady is in no mood to get carried away by the adulation. In fact, she has been playing down her early success.

"The only thing that has happened is that you have given me a book and I kind of feel that I can read," she said when Cinestaan.com met her. "A lot of people would think chapter one is finished, but at least for me, I needed to just see myself on the screen. I understand the media, audiences, my parents, they matter a lot, but at the risk of sounding arrogant, if you are not convinced you can try till the cows come home, you will not convince anybody else.”

While she certainly cherishes the adulation, the young lady is also aware of the tough task of having to meet expectations. “I needed to watch the film," she said. "Having done that and then seeing the appreciation one has gotten, I don’t know if confidence is the word, but I feel a duty now. When you give somebody love in any form, then it comes with a certain duty attached. Because you have liked me, I know what it feels like to make you like me. I need to make sure that I do that for the rest of my life.”

There has not been much time for success and the actress called her media interviews her celebration. And she is neither being modest nor resorting to flattery. "For the past three weeks, I have been promoting Simmba or promoting Kedarnath or dubbing, shooting a song for Simmba," she explained. "It has been quite hectic. I mean this from the bottom of my heart: the only time one gets to internalize what has happened is at interviews. After Kedarnath was released, it is talking to people, that is the biggest celebration. There is nothing more beautiful than celebrating with people who make you what you are.”

Sara Ali Khan said she also discreetly watched Kedarnath in the popular Gaiety-Galaxy theatre complex in Bandra, Mumbai, hiding in a burkha. And was touched to see people cry at the climax.

"When you do a film, if you are moved at all, permanently or in the moment, it is the most beautiful thing," she said. "I have had the opportunity to be moved multiple times during Kedarnath. It is similarly my duty to move you for a second, My mother cried in the climax. She, too, came along wearing a burkha."

It is natural for a child to be like its parent, but older film journalists have noted that Sara Ali Khan is very like Amrita Singh who, too, shone for her supreme confidence in her early films. Though she liked the appreciation, Khan felt it was unfair to be compared to her mother, whom she rated a better actress.

“This (pointing to her looks) is one thing, unlike acting, that you can say runs in the genes," she said. "It is not shocking to look like your family, but what is shocking is that there are these pictures that I have of mom, which I hadn’t seen before. I found these collages on Instagram, one having me with a purple lipstick and then there is a picture of mom from 20 years ago in purple lipstick. I was like ‘wow! we are doing the same thing with our faces'."

There has been a good buzz around Simmba with the trailer and the songs largely receiving positive feedback. The 'Aankh Marey' song has, in particular, been liked. But how was it to match up to the energy level of the bumble bee Ranveer Singh?

“I don’t know, and I don’t think I have it," she responded. "Because it is Ranveer Singh, but I have tried to stand my own to the best of my ability. I think that a lot had to do with [choreographer] Ganesh [Acharya] sir. Honestly, I was having a lot of fun.

"There are moments in your life when you are taken aback. I am a huge Neha Kakkar fan. I have listened to all her songs, from the 'Pyaar Te Jaguar' types. Now when I go on to YouTube and type 'Aankh Marey', the only face to ‘Siti bajaye’ [the lyrics] is mine! That’s so funny and shocking. I knew when I was doing the song that I would want to do that. I wanted to take care of this girl. The only way I could have done it is by having a blast. Ranveer is the biggest star in the country, he is right that when you have fun, that fun is captured for you to see, to feel and show, which is what I think is resonating with audiences.”

Sharing her thoughts about Simmba director Rohit Shetty, she said, “I am a huge Rohit sir fan. I aspire for versatility. I really mean it. I don’t want anyone to say Sara cannot do a particular genre. Rohit Shetty is the king of commercial cinema, knowing that he is doing a film with Ranveer Singh, the question is why would you not want to do it?"

Asked how she reacts to being labelled the next big star, Sara Ali Khan replied, “With Kedarnath what has been established, if anything, is that this girl has potential. Stardom, fans, these are all really bad words. How can one say that now? I don’t think there is a single fan. Anybody who is there is a genuine well-wisher. You need to have a body of work for fans and stardom. What matters to me here is happiness and the way to achieve that is conviction in your work, happiness on sets and hopefully giving that happiness and conviction when people come and watch you on Friday.”

When star kids follow their famous parents, they often carry the baggage of expectation. Does a good performance in the first film change the way people look at them? 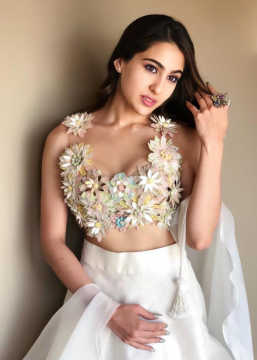 “I don’t think it is a burden," the young woman said. "All it [Kedarnath] has done is made me aware that I need to do better work, I need to do more work. I need to work harder. What happens is that your battles keep changing. That’s life. There will be new challenges. Now the challenge is not searching for acceptance. Honestly, I have worked very hard. I have tried my level best with Kedarnath. I deserve 80% of the praise I am getting. The remaining 20% is a combination of good karma and the fact that people are genuinely liking me. I need to make sure you guys love my work. I'm going to work doubly hard.”

Finally, critics and audiences have liked her performance, but what did Khan herself make of it? “I saw every shot and felt I could have done this or that. I had spoken to people about this. They would say, yes, could have but cannot really! I used to mess Ranveer and Sushant’s head the next day. All that they would say is that it is a new day. Just move on. I listen to my directors. As long as I can keep doing that, I think I should be okay.”