Rewind 2018: Who was the year's Best Actress in Hindi cinema?


As 2018 winds down to a close, we look at 10 briliant performances by actresses who showcased some serious talent on the big screen.

The year 2018 has been an interesting one for Hindi cinema. While big-budget films tripped, films with good, engaging content and well-structured stories and characters lured audiences to the theatres.

Another surprise was that many of these films were built around female characters that were strong, independent, and capable of carrying a film on their own. Whether it was the complex emotional roller-coaster of Alia Bhatt’s Sehmat in Raazi, the courage and stoicism of Safia Manto portrayed by Rasika Dugal in Manto, or the mysterious malevolence of Simi (so effervescently played by Tabu) in Andhadhun, these characters brought a different dimension to the hitherto male-dominated Hindi film circuit.

In fact, five of the 10 Best Films of the year according to Cinestaan revolved around strong female characters, a rarity in Hindi cinema.

So, without further ado, let's look at the 10 Best Performances by an Actress in Hindi cinema in 2018. Click here if you would prefer to just look at the video compilation. 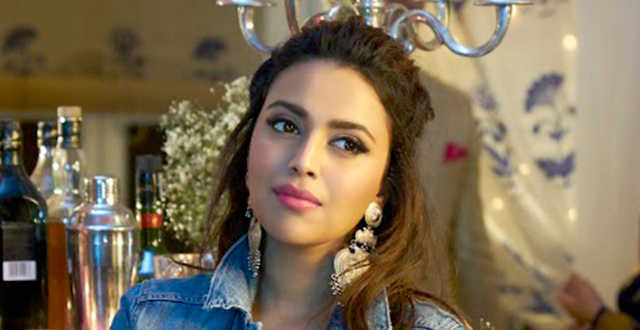 It is quite unfair to separate Swara Bhasker from the rest of her ‘Veeres’ in a film that might just be the first ‘sisterhood’ film from India. Shashanka Ghosh’s film delivered a surprising result at the box office by earning Rs80 crore nett. In a country where people often get offended by the clothes women wear, this was a delight.

Swara Bhasker scored a hat-trick of fantastic performances in three years with Veere Di Wedding, after Nil Battey Sannata (2016) and Anaarkali of Aarah (2017). The actress played the uncouth rich brat Sakshi, who still hides her divorce from her parents. She brought a sense of happy abandon as she played the brash woman posing as the ultimate rebel to friends while internally suffering from the same sense of judgement.

Like we said, the film captures the life of women, admittedly from the upper strata of society, from an intimate perspective, making it difficult to pick one performance. But since we have to, it has to be the inimitable Sakshi played by Swara Bhasker. 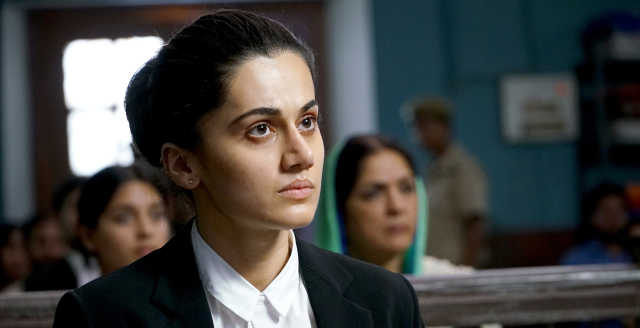 Taapsee Pannu is making it a habit of saving her best for the courts. After the stupendous Pink (2016), the actress delivered again, this time as an advocate defending a Muslim family — that Aarti is married into and is actually about to exit, as she and her husband have grown apart — hounded on account of their misled son. Even in a film powered by some fabulous performances from an ensemble cast, Pannu stood out.

The actress balanced the angst and frustration of her character with the feistiness of an independent woman fighting to protect her family. The court scenes, where she was pitted against the bellicose prosecuting attorney played by Ashutosh Rana and with Rishi Kapoor, are examples.

Anubhav Sinha’s Mulk was the secular film that dived into the conflict and bitter truths of divisive dialectics which abound in the country today. In Taapsee Pannu, Sinha found the perfect foil through which to deliver his message. It is in her conviction that the actress captures the attention of the audience. That is also why Taapsee Pannu is considered one of the stars of a new generation of actresses. 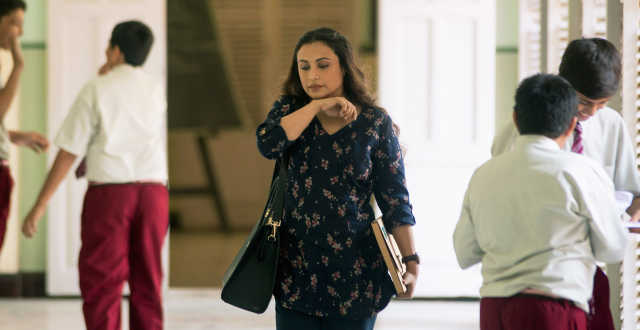 Rani Mukerji’s turn as a teacher affected by Tourette’s syndrome was a surprise for many. The actress called upon her vast experience to play the teacher who takes her problem as just another challenge to overcome.

In her earlier performance as a person with a disability (Black, 2005), Mukerji was accused by some of overplaying and dramatizing the role. In Hichki, the actress reined in the ticks and quirks of Tourette’s syndrome, keeping it real. As the teacher trying to get a bunch of unruly children interested, to help them overcome the challenges of class and discrimination, Mukerji united the two different dimensions to add depth to her character.

The film might not have made the same impact at the box office as Black, but Mukerji’s performance was a timely reminder that she still possesses the ability to wow the audience. 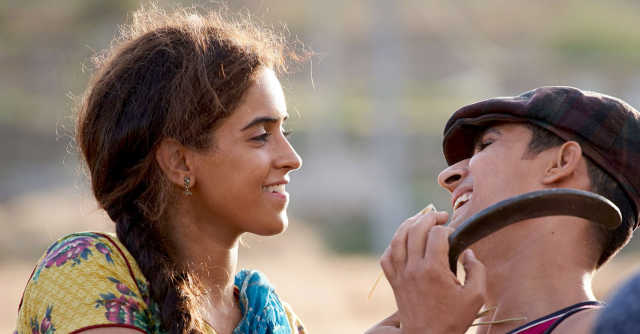 She might have played a wrestler before, but Vishal Bhardwaj threw Sanya Malhotra in the deep end of the ring in this symbolism-heavy tale of two sisters at war. The actress certainly matched expectation with a performance that defied belief. Grungy, vicious, and, at times, adorably comic, she brought pizzazz to the role.

Where she had played the subdued younger sister in Dangal (2016), Malhotra switched on the energy, angst, and power in Vishal Bhardwaj’s film making it a surprise for audiences and critics alike. 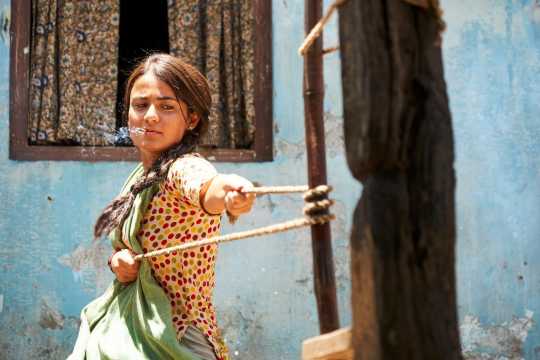 If Sanya Malhotra brought energy to Vishal Bhardwaj's film, she was matched on screen, literally, by Radhika Madan. The actress made her cinema debut with a visceral, grimy and real performance that left you in no doubt about her talent. The Heath Ledger to Malhotra’s Christian Bale, Madan brought earthiness and sass to her ‘Badki’.

It was not just in the crudeness of her character that Madan impressed viewers. The transformation of her character, impressively written, was also conveyed effectively through her performance. A weak performance from her would have dragged down the performances of the rest of the cast as well.

While the film might have evoked a mixed response at the box office, there is no doubting Madan’s talent. The actress already has Mard Ko Dard Nahin Hota (2019) awaiting a theatrical release after its successful festival run.

5. Tabu as Simi in Andhadhun 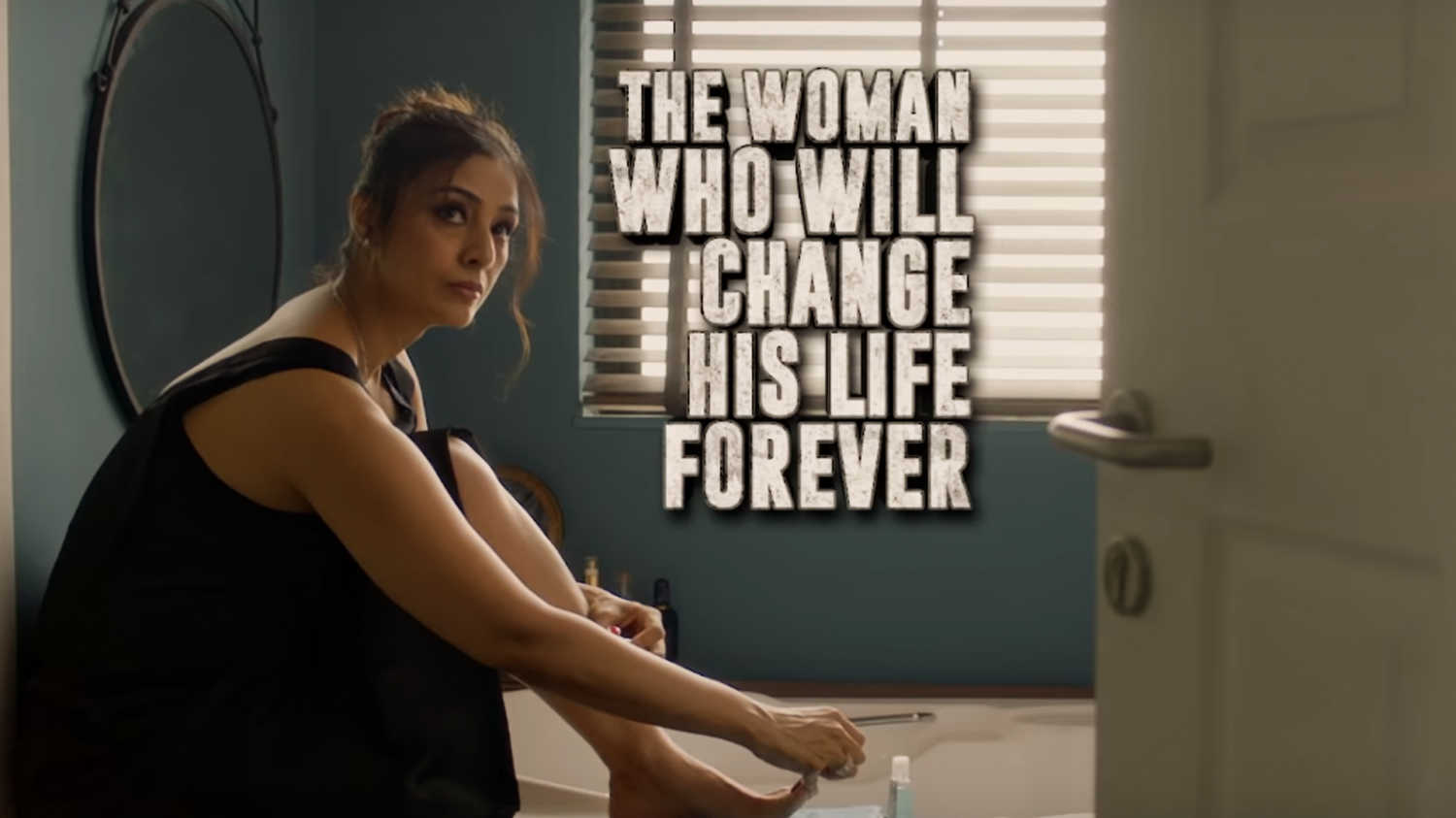 To find Tabu on a list of best actresses is hardly surprising. She has been there and done that, and continues to spring a surprise every year with the diversity of her performances. In Sriram Raghavan’s pulp fiction thriller, Tabu took on the role of femme fatale yet again, but with a twist.

Tabu played Simi with a subtle touch of malevolence lurking beneath her seductive appearance. In a game of twists and turns, with quite a few hidden symbols, she used all her experience to add just enough allure to her character to keep it engrossing without becoming overpowering.

While Tabu has played the femme fatale in Maqbool (2004) and Haider (2014), Simi was a very different character and Tabu raised and lowered the tempo subtly, making it one of the more elusive characters in this noir thriller. 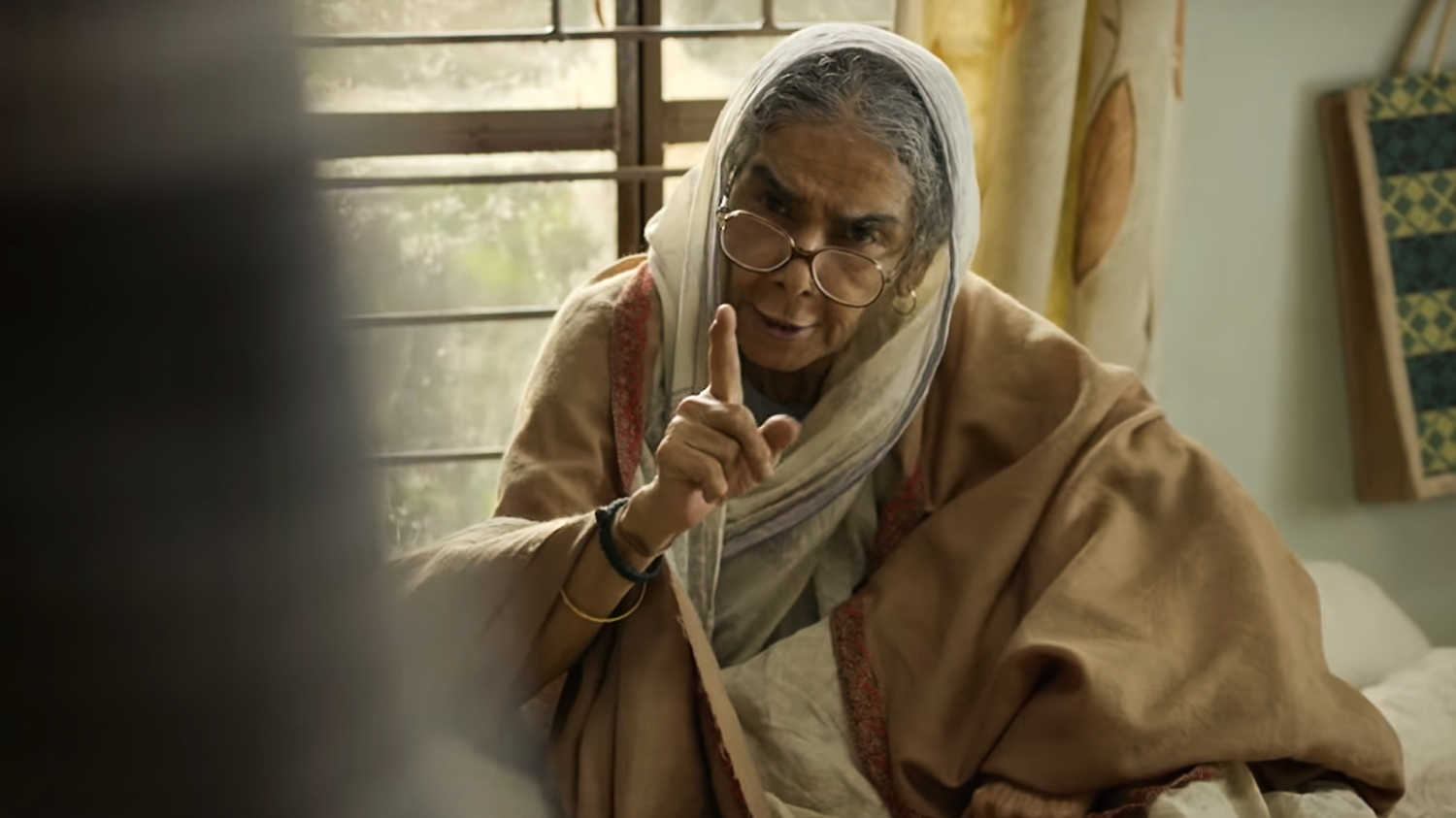 Undoubtedly the standout film of the year was Amit Sharma’s Badhaai Ho. A slice-of-life comedy about an unexpected middle-aged pregnancy, the film was a surprise hit. The quirky story aside, it was elevated by some fantastic performances by an ensemble cast which included Gajraj Rao, Neena Gupta, Ayushmann Khurrana and the veteran Surekha Sikri.

While Gupta and Gajraj Rao deservedly walked away with the plaudits, we found space for the underrated Sikri who delivered with aplomb as the sassy Dadi in the Delhi drama. A veteran of stage and films, Sikri was in top form as the conservative granny baiting her already embarrassed daughter-in-law and son through the unwanted pregnancy. The actress’s natural spirit and expressions made the character a memorable one in a memorable film. How could we not have her on this list? 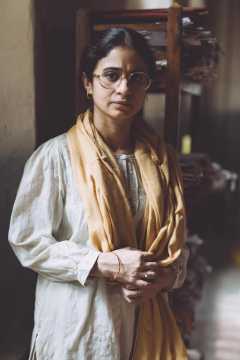 Nandita Das’s searing profile of Sa’adat Hassan Manto would have been incomplete without the presence of the rock in his life that was Safia. While the film revolved around Manto, his life, pain, art, and struggles, Safia remained steadfast as the woman propping up the falling idol.

As Safia, Rasika Dugal brought the struggle of a writer’s wife to the fore. The actress is among a new breed of performers who focus on internalizing the struggle rather than portraying it through histrionics. She matched the intensity of Nawazuddin Siddiqui’s performance without trying to overpower his character or steal the scenes. It is here that the true character of Safia emerged.

In a recent interview, the actress admitted that she was like Safia in real life. Perhaps that explains the impact she made in capturing the lives that Manto’s ideals tore apart.

In a film filled with testosterone and violence, Zoya Hussain made an astonishing debut. The actress played the mute love for which Vineet Kumar Singh’s Shravan Kumar battles caste, hatred, and his own burning ambition.

In a story as fiercely masochistic as Anurag Kashyap’s hinterland drama, it would have been easy to miss or ignore the actress, particularly when she plays a mute. Zoya, however, forced her way through with stubborn determination. Her portrayal of a handicapped young woman eschewed any pretence of vulnerability, weakness or dependence. Whether it was her explosion of rage or mute display of love, it was easy to fall for Zoya and hard to believe that she can speak in reality.

Sunaina was a refreshing change from the overt physical displays that often blind actors playing handicapped individuals.

1. Alia Bhatt as Sehmat in Raazi 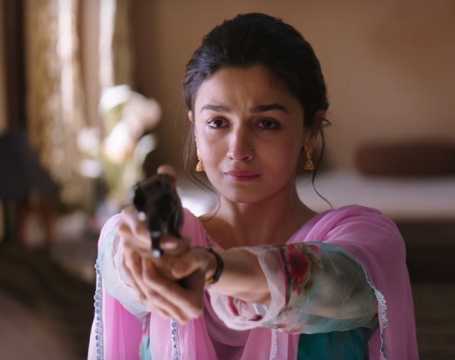 There is no doubt Alia Bhatt is a rising star. The actress has surprised audiences with her stellar choice of scripts through her fairly short career. What makes her a standout is the combination of her screen presence and emotive ability.

In Meghna Gulzar’s Raazi, the actress touched something sublime with her portrayal of a young bride double-crossing her husband for her country's sake. Based on the book Calling Sehmat by Harinder S Sikka, Meghna Gulzar’s film balanced the very current issue of patriotism with the struggle of a lover’s heart. She could not have found a more skilful artiste than Bhatt to portray the innocence, the pathos, and the determination of Sehmat.

The audience agreed. Meghna Gulzar’s film won both critical and commercial acclaim, raking in over Rs100 crore at the box office. It also cemented Alia Bhatt's position as probably the best of her generation.