The actor was known for his comic roles, but he also proved his mettle with serious roles.

Govind Arun Ahuja, popularly known as Govinda, is one of the major reasons why the 1990s are looked upon with such nostalgia by those who grew up in that decade. His name was synonymous in that era with comedy and humour.

The actor’s combination with hit machine David Dhawan produced a number of laugh-riots that can be revisited even today. However, Govinda also proved his mettle as a serious performer in that decade.

On his 55th birthday today (Govinda was born on 21 December 1963), we revisit eight memorable roles of the star. 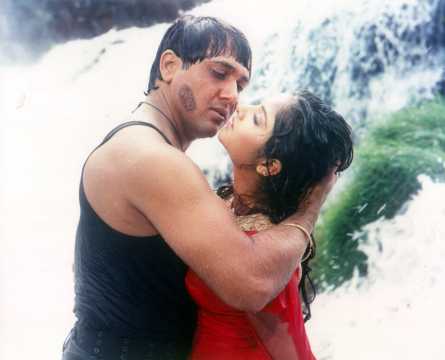 Govinda and David Dhawan have done numerous comedies together. In fact, just their names on posters assured audiences of unlimited laughs.

But it wasn't always so. Dhawan’s directorial debut Taaqatwar (1989) saw Govinda in a serious role. This continued with Swarg (1990) and Shola Aur Shabnam (1992).

In the last-named, Govinda played a lover who is always ready to fight all obstacles in his and lover Divya's [Divya Bharti's] path. His no-nonsense expression during a long sequence with Divya Bharti will surprise those who have only seen him in comedy roles. 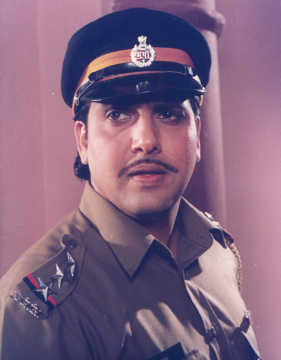 Khuddar saw another memorable performance by Govinda in a serious role, much before he ventured full time into comedy. It is also one of the rare hits of Govinda in the 1990s which wasn’t directed by David Dhawan.

The film saw the actor playing a serious and emotional police officer, a role that he performed with dedication. The scenes in which he takes Karisma Kapoor’s hands and worships them and later when he is forced to carry the shoes of the villainous politician played by Shakti Kapoor stand out. 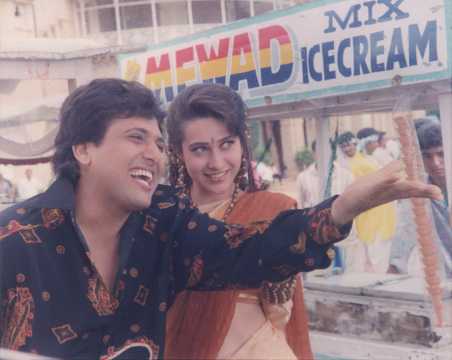 With this film, Govinda entered a phase where he became the most sought after actor when it came to comic roles. His collaboration with director David Dhawan became the proverbial goldmine at the box office.

As you might have guessed from the title, Coolie No 1 saw Govinda play a coolie. But he ensured that viewers were not reminded of Amitabh Bachchan’s iconic character from Coolie (1983).

The film also required the coolie Govinda to pretend to be a wealthy businessman to fool Kader Khan’s character. Govinda excelled in both roles. This was when his comic timing was just superb. The scene in which he blabbers "laanat hai, laanat hai, laanat hai [it is a shame]", is hilarious. 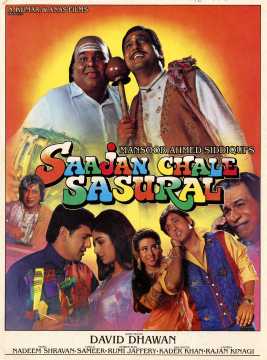 After the success of Coolie No 1, the pair of Govinda and David Dhawan continued with Saajan Chale Sasural. This film offered the actor a chance to display various shades of a character. He started off playing a naive music performer in his village who rises to fame and becomes a musical star.

All of a sudden, he finds himself married to two women (Karisma Kapoor and Tabu), which makes him go into the comical tragedy zone, generating laughs aplenty. The effortless manner in which Govinda switched from serious to comic was noteworthy here.

Hero No 1 was yet another film by the Govinda-David Dhawan combo, another in the ‘No 1’ series. Interestingly, this was also a film in which the director made the actor play dual characters. He is actually a spoilt brat who lives a luxurious lifestyle. But he later goes on to become a servant in the household of the woman he loves (Karisma Kapoor) in order to win the hearts of her family members.

Of course, the character and the events during his stay in the heroine's household remind you of Hrishikesh Mukherjee's Bawarchi (1972) in which Rajesh Khanna played a similar role. But the entertainment quotient ensures you don’t mind it.

David Dhawan’s Deewana Mastana posed a different challenge for Govinda. The character played by him was battling psychological issues. At the same time he was required to be funny and entertaining. He passed the test with flying colours. His dialogue, ‘I feel good, I feel better,’ which he repeats quite a few times, deserves mention. The highlight of the film was also his hilarious confrontational scene with Anil Kapoor as they both battle to win Juhi Chawla’s affection.

Dulhe Raja was one of the rare successful comedies starring Govinda in the 1990s that was not directed by David Dhawan. It was a Harmesh Malhotra directorial where the actor was paired opposite Raveena Tandon.

The premise of the film and Govinda’s character of the owner of a dhaba provided plenty of scope for entertainment. The actor played an adamant character who refuses to sell his dhaba so that a rich hotelier (Kader Khan) can expand his hotel. Worse, he falls for his daughter.

There is a laundry list of scenes in this film where Govinda wins you over. The one where he offers Kader Khan’s character a job in his dhaba is the best.

Haseena Maan Jayegi was another David Dhawan film in which Govinda played two characters. This time, the challenge was greater because he had to play an older man for a good amount of screen time. He brought in a specific manner of speaking while playing the aged character, which added to the humour quotient. His scenes with Aruna Irani, who falls for him, and the dialogue, ‘Sab log ek saath ek bathroom mein kyun aa gaye? Ghar mein aur bhi bathroom the’ leave you in splits even today.