Landscapes are characters in my films, they play their own role: Praveen Morchhale on Widow Of Silence


Award-winning filmmaker Praveen Morchhale speaks about the importance of aesthetics for him while making a film and why he cannot wait to tell the stories he wants to tell.

What does a piece of paper stamped by the government mean? Does a slip of paper authenticate a person's existence more than the person herself?

Praveen Morchhale’s latest film, Widow Of Silence, contemplates these questions as a Kashmiri Muslim woman struggles to obtain a death certificate for her missing husband from the government. Like countless so-called half-widows, her days seem to be an endless wait, without any reprieve for her or her family.

In a minimalist style that brings to the fore struggles for the basic things in life, the film, set against the stunning landscape of Kashmir, questions notions of legitimacy and power.

In a conversation with Cinestaan.com, Morchhale spoke about the aesthetics of his cinema and why it is crucial for filmmakers to tell these stories. Excerpts:

What led you to explore the story of half-widows?

When I heard the phrase 'half-widow' about a year and a half back, I was disturbed. I started doing research and found many articles on half-widows and learned about their plight and suffering over a period of 30 years.

Within 5-7 days, I was in Kashmir doing research and met a few of these widows. When I met them, they immediately started crying and one of them said people do not consider them human, as being alive. Then I just decided to talk to them about their everyday life and on the basis of my research material, many court cases, I created a situation where I can tell a story as well as show the political and social situation in Kashmir. 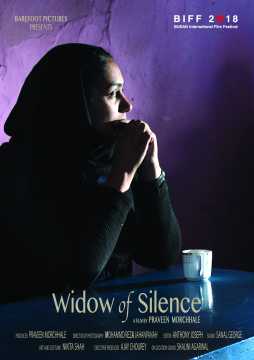 This film is very political in the sense that even if we do not talk, we are political. Nothing is apolitical in this world. If something wrong is happening and we keep quiet, that is also politics. The most important thing I felt is that these women deserve a dignified life, which we have failed to provide.

The film includes a critique of the government and the military and even though you have tried to maintain a balance, we see most starkly in the stories of both the mother and the daughter that violence begets violence. Do you think one is forced to become a creature of violence because of what the system or people do to you?

If you slap even a small child repeatedly, the child will also bite you or hit you. It doesn’t matter how strong you are. Similarly, when people have no option left, they are helpless, they seek some kind of revenge. Helpless people can’t do anything. Their shouting has no meaning, their pleading has no meaning. So what other way is left?

In your previous film as well as in this one, the stunning locations seem to almost be out of time. What drives the aesthetics of your film where each frame is like a painting?

I have been doing photography since my school days and aesthetics is very important for me. I find the balance. Even if your life is painful, those stories are taking place against a beautiful landscape. It's like a contrast. We are living in heaven with a hell sort of situation. Nature is beautiful, but as a human, because of our selfishness, we are not reciprocating the beauty of nature.

Praveen Morchhale: I don’t talk about what is wrong, I just show it as it is

Whenever I think of a story, I try to set that story in the location because it is very important that you believe it. Landscapes are characters in my films, they play their own role. So when I get an idea, even before writing one page of the story, I go and find the location, the right place, and then the local people become my actors, characters, they define the story.

This village is close to Tiger Hill [a mountain peak in the Kargil region that was fiercely contested by Indian and Pakistani troops in the 1999 conflict] and was bombarded when the Kargil war happened [in 1999] and life there is the same, except for a few minor changes. As you said very rightly, it’s out of time, you feel like you are standing 60-70 years earlier.

How influenced are you by Iranian cinema and Abbas Kiarostami’s work in particular?

I have taken one very important thing from Iranian films — the simplicity. You tell your story in the simplest way, your own story in your own way, in the most non-complicated, non-dramatic way.

Our life in general is not very dramatic, but our cinema is very dramatic. I try to capture those beautiful, simple moments of life and, of course, in Kashmir or Ladakh, the landscape is so beautiful.... I try to keep that aesthetics and beauty because in such beautiful places such inhuman actions are taking place, those contrasts have to be brought out in cinema.

You are also the producer of this film. I wanted to know how difficult it is for you as an independent filmmaker to separate the creative aspects from the commercial ones?

When this idea came to me and I got back from Kashmir, I called up 2-3 people who had told me they would love to make my next film after Walking With The Wind. I told them about this idea, and I am always a person in a hurry, and I planned to shoot in two months. But they asked me to hold on and shoot after six months, have the script ready and wait for the shoot.

But I was not willing to wait. I found these stories important and urgent, in the sense that they disturbed me a lot and I felt that I should tell these stories as soon as possible. So I decided that I will make the movie myself and within one and a half months we were shooting the movie.

But when I produce my movies, I have no expectation of the commercial aspects, that it will give me some kind of return, but it took one and a half years of my earnings through making documentaries etc. So I never expect the return, but when I make the film I never worry about a single paisa. I forget the money part. As a filmmaker it is our responsibility to put light on those darker sides of society and I am happy if people start thinking about this.

Widow Of Silence was screened at the International Film Festival of Kerala in Trivandrum on 11, 12 and 13 December 2018.