On the 41st death anniversary of the multi-faceted artiste, grandson Sumitr Madgulkar looks at the revolutionary aspect of his life.

Gajanan Digambar Madgulkar aka GD Madgulkar aka GaDiMa was one of the more famous personalities of Maharashtra in the past century, being a leading poet, lyricist, author, actor, playwright and magazine editor.

But GaDiMa also played a role in India’s freedom movement. On his 41st death anniversary today (Madgulkar died on 14 December 1977), grandson Sumitr Madgulkar looks at this aspect of his life in an exclusive conversation with Cinestaan.com.

“GaDiMa was an admirer of Mahatma Gandhi and was inclined towards the Congress party at that time,” Sumitr said

Circumstances did not let Madgulkar participate directly in the freedom movement, but he made up for it in other ways. “Considering his family background and family issues, instead of participating directly he wrote powadas [inspirational songs] for the struggle,” Sumitr said.

Later, too, Madgulkar was known for writing inspirational and patriotic songs, both for Marathi films and for non-film performances. Some of his famous songs in this genre are ‘Jinku Kinvva Maru’ from Chhota Jawan (1963), ‘Hey Rashtra Devatanche’ from Gharkul (1970), and ‘Ladha Veer Ho Ladha Ladha’.

Freedom fighter and revolutionary Nana Patil, popularly known as Krantisinh, had set up a parallel government of revolutionaries called Prati Sarkar during the freedom struggle. Madgulkar was a member of this Prati Sarkar. “He was an associated member of the Prati Sarkar in the Sangli-Satara region,” said Sumitr. 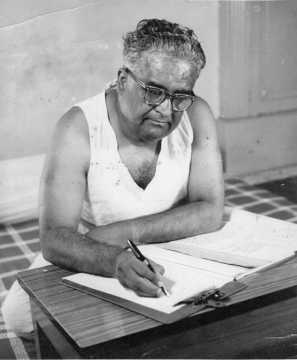 That’s not all. Madgulkar’s house was known as a trusted venue for revolutionaries of that era to meet in. “GaDiMa’s house in Kolhapur was the ideal place for freedom fighters to hide their looted money, guns, jewellery, etc,” the grandson said.

“Chavan nominated GaDiMa as a member of the legislative council for 12 years from 1962 to 1974 as a representative of the Marathi film industry," Sumitr recalled. "Many would attend the sessions simply to listen to GaDiMa speak!”