The fashion designer also rubbished Kohli’s claim about lying about her first marriage.

Speaking to us, Randhawa said, "I just think it is a paid interview. They [Bombay Times] should have checked the details with me before printing it. This interview is a personal attack on me. All the women that Kohli had [allegedly] beaten before, has the publication totally forgotten about them? Or do they believe that Armaan Kohli is totally clean?"

Randhawa was referring to the Bombay Times interview in which Kohli alleged that their tiff happened over Randhawa swindling the rental income earned through his properties, which she was collecting.

"My only fault was that I didn’t ask her to give me the money immediately, as I trusted her. She has mentioned that the rent money was just Rs60,000. But in reality, it was Rs22 lakh. She threw a fit every time I asked her about it, I realized that she was duping me. The cheques would come, but the cash would disappear as people were transferring money into her account,” Kolhi had said.

In June this year, Randhawa had accused Kohli of physically assaulting her and acting upon her complaint, the Mumbai police had arrested Kohli. The matter was brought up in the Bombay high court.

On 18 June, Randhawa had agreed to withdraw her case after the two parties agreed upon a settlement of Rs1 crore. Randhawa said she received Rs50 lakh, but moved the court again after alleging that the second cheque of Rs50 lakh had bounced.

At the time of the incident, Kohli had claimed that he acted in defense of his mother, who Randhawa allegedly charged at. He spoke at length about the matter for the first time to Bombay Times. He accused Randhawa, an NRI (Non-Resident of India), of swindling his income earned through the rental property in Goa. Randhawa was handling both Kohli’s marketing and business affairs.

Commenting on Kohli’s primary allegation that she swindled his rental income, Randhawa said, “I'm sharing with you bank deposits receipts into his account. One can check with his staff. The receipts are more than enough to prove that the money was deposited into Armaan’s account.” 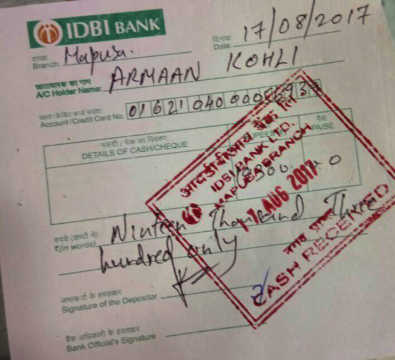 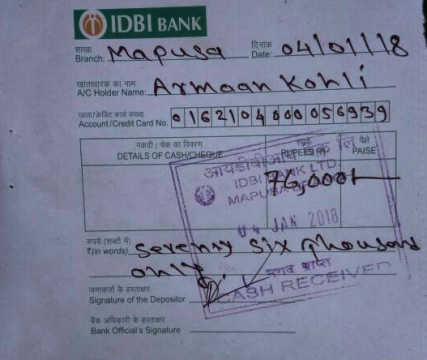 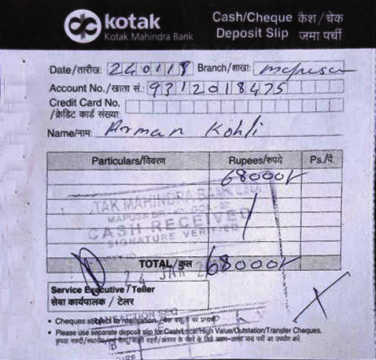 Randhawa informed that Kohli has an Airbnb property in Goa. The online booking payment was received online while the staff there would immediately send photos of cash deposit receipts to her. Randhawa has been dating Kohli for the last three-and-a-half years and claimed that she had been handling the property rental business from the last two years.

“I can show my bank statement for the last three-and-a-half years, I have not deposited any money from his [rental property] bookings into my account,” said Randhawa.

When asked about the Rs22 lakh that Kohli accused her of swindling, Randhawa replied, “Can Armaan reveal about the booking for which he hasn’t got rent for? He doesn’t even know what bookings he had. I was the one who was handling it. I don’t know from where he has come up with this Rs22 lakh. As I said before, I am ready to produce my bank statement to prove that no money was deposited into my bank account. Any online booking that was done would go to Airbnb, who would then transfer the money into his account. If there was a cash transaction, the staff deposited it directly to his account. For the record, being an NRI, one cannot do cash deposits into my account.”

Randhawa requested for some time to produce her bank statement.

What about Kohli’s allegation that she hid details about her previous marriage? Kohli had alleged that he only came to know about her first marriage through a friend who was known to Randhawa’s husband and his family.

Randhawa didn’t comment much on it as it was personal, but did state that Kohli knew about it all along.

“He was fully aware about my personal situation. It was all over and done with. I would only enter into another relationship once the previous relationship was over. How can I be living with a guy for four years, and he doesn’t know anything about me? Is it possible?  If I were married, then wouldn’t my husband be asking what am I doing?” Randhawa clarified.

Randhawa claimed that she got divorced in 2016, but refused to share the divorce certificate as it was too personal.

“Armaan claimed that he only came to know about this six months ago. Well, I’d like to ask him, even if one is going through a bad marriage, does that mean you can’t have a relationship with someone? Is that illegal? No. It would have been illegal had I married him without divorcing my first husband,” Randhawa pointed out.

The Randhawa-Kohli battle is still in court as she said that her second cheque of Rs50 lakh had bounced. Kohli claimed in the Bombay Times article that that matter was settled for Rs50 lakh and Randhawa was now trying to extort money from him.

“I agreed to put an end to the whole thing by paying Rs50 lakh. I paid her the amount three days after she filed the FIR and before I was arrested. While I was expecting the issue to be resolved, she didn't withdraw the case and made sure that I was put behind bars. In fact, she demanded Rs50 lakh more from me while I was in jail to withdraw the case. She hasn’t mentioned the Rs50 lakh that I already paid her. I have now decided to pursue this case and I am sure the truth will be out soon. I have filed a case of extortion and cheating against her,” Kolhi told Bombay Times.

While Kohli has leveled allegation of fraud against Randhawa, the woman claimed that she has not received any legal notice from him in this regard. Randhawa shared with us the copy of the settlement wherein it is clearly mentioned that Rs50 lakh has been paid to her, while the remaining Rs50 lakh is still due to her. 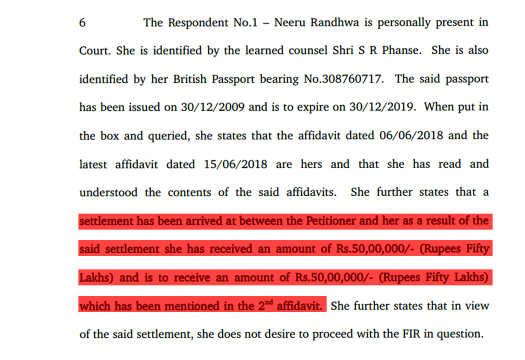 Kohli has all along claimed in the media report that he acted only in defense of his mother, who Randhawa was [allegdly] trying to hit. Randhawa once again asked Kohli to produce the CCTV footage to prove that she was the one who assaulted his mother. Randhawa has maintained that an argument broke out between them and Kohli’s mother had only entered the room after hearing them fight.

“If he was telling the truth, then why has he not produced the CCTV footage in the court till date? He has deleted it. Now, if he isn’t guilty, then why did he issue an apology letter?” Randhawa shot back.

She shared a copy of this apology letter from Kohli wherein the actor has apologized for his conduct.

We tried contacting Kohli but did not get a response. 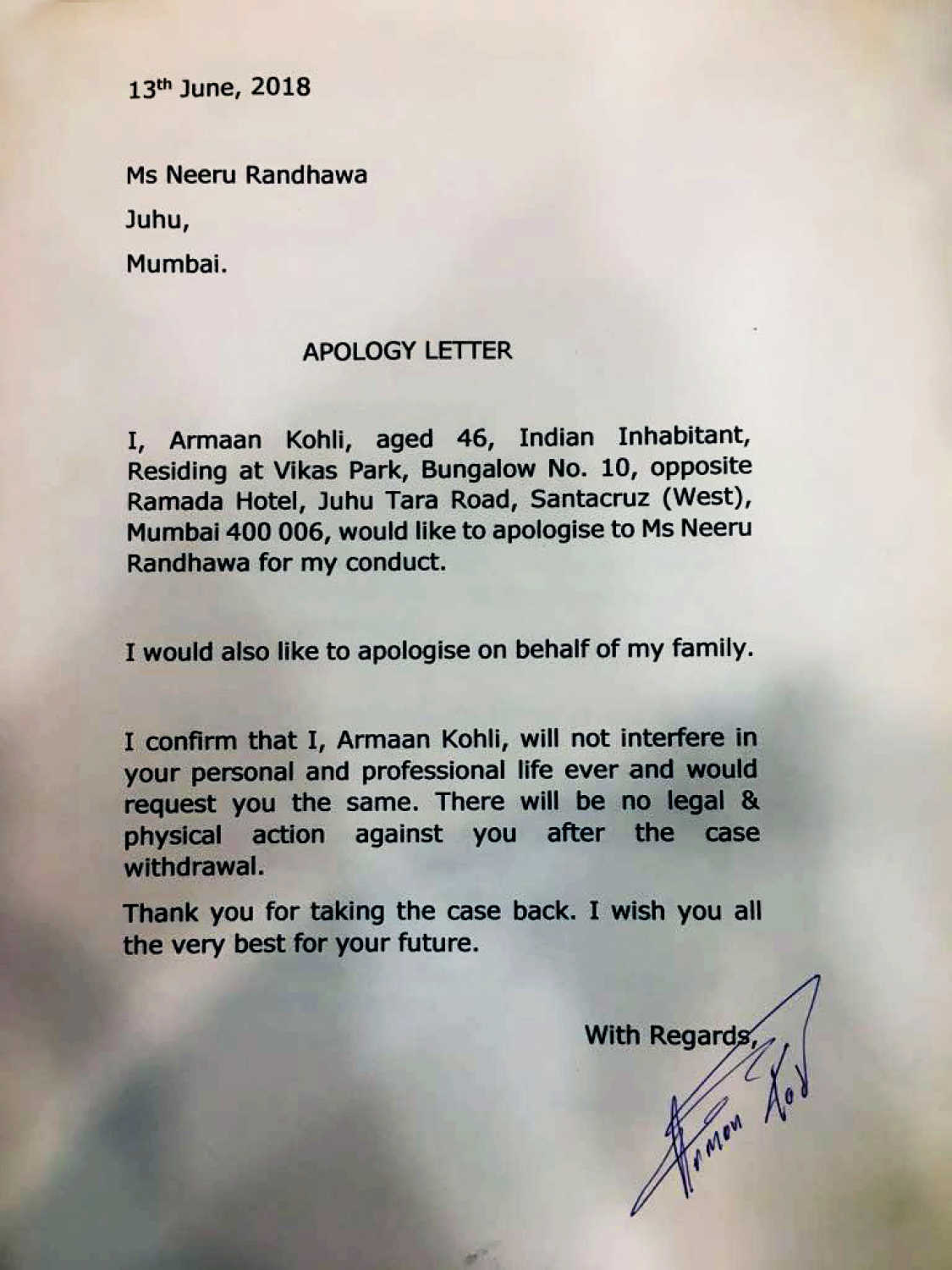