I am married to acting but dating teaching, jokes Nayani Dixit

Theatre and film actress and acting teacher Nayani Dixit conducted a masterclass on acting at the LIFFT India Filmotsav in Lonavala on Saturday.

During her session, Dixit gave special importance to pronunciation and diction which, she said, is poor in today’s youngsters who fail to achieve fluency in their own language in their pursuit of English.

“The irony is that you don’t learn any language properly, be it English, Hindi or your own regional language,” said Dixit during an exclusive conversation with Cinestaan.com after the session. “If you feel you will go ahead in life only by learning English, you are wrong. Such degradation is seen in every language, not just Hindi.”

Dixit has displayed her mettle as an actress in films like Delhi Belly (2011), Queen (2014) and Shaadi Mein Zaroor Aana (2017). Her act in Neeraj Pandey’s Special 26 (2013) is memorable despite the limited presence because of the way she says the dialogue, “Milke ukhadenge na sir. Thoda aap, thoda hum [We'll uproot it together, sir, you and me].”

But despite her passion for acting, Dixit wants to teach simultaneously. “Basically I am an actor, so I love acting. But if I have to choose another profession, I will, of course, choose teaching," she said.

"It’s like I am married to acting and I am dating teaching,” she added with a laugh. “Teaching is another priority of my life. I decided after a certain point of time that apart from acting I will be focusing on teaching acting and, especially, language.”

Dixit believes it is possible to pursue both as displayed by some of the legends of Indian cinema. “When I was in FTII [the Film and Television Institute of India, Pune], Naseeruddin Shah, Om Puri and Pankaj Kapur were our teachers. They are also busy actors, but they balanced [the two professions]. So, I am also trying to follow that,” she said.

The actress was appreciated for her character Abha in Shaadi Mein Zaroor Aana. Unfortunately, she had to reject the offers that followed to avoid getting stereotyped.

“After that film, I was offered two or three roles which were so similar," Dixit said. "If you keep doing the same thing repeatedly, your growth as an actor stops.” Also, practising what you preach is important for her. “[Accepting those films] would mean I won’t be applying what I am teaching to my students. So, I had to reject those,” she added. 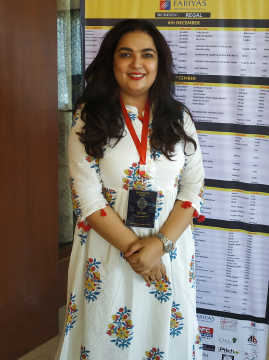 Dixit looks at auditions in a different way. “When you go for an audition, no matter if you are a budding actor or an established one, you have a right to listen to the story before you give the audition," she said. "If I don’t like the story, there is no point giving the audition.”

When told that this practice is hardly followed in Indian cinema, she retorted, “That is because people start learning to compromise.”

The actress believes that doing theatre is a must for budding artistes. When she was a child, she started doing theatre with her father, who has always been a theatre director. She also learned dance. “Performing something live focuses your mind," she explained. "It helps your memory and also trains your mind in the tendency of your framing and marking.”

Dixit said she enjoys conducting masterclasses at festivals like LIFFT India because that helps her to meet different people. “Generally you teach at one place only," she pointed out. "People have come here from different places. It is always the duty of an actor or teacher to spread the message that training for acting is very important.”