Anushka Sharma on Zero: Everybody has imperfections, they may just not be immediately apparent


The actress speaks at length about the research that went into her character in Zero (2018), the special challenges she faced, and her career so far.

Anushka Sharma has already had three films this year — Pari, Sanju and Sui Dhaaga. In all three, her characters have been very different. But in Aanand L Rai’s keenly awaited Zero (2018), her character is truly out of the box.

In the Shah Rukh Khan starrer, Anushka Sharma, who began her career opposite him in Rab Ne Bana Di Jodi (2008), plays a wheelchair-bound cerebral palsy patient who, despite her condition, is happy and contented.

Directed by Aanand Rai and also starring Katrina Kaif, the film is about the love story between Shah Rukh Khan's dwarf character and Anushka Sharma.

Sharma spoke at length about the research that went into her character, the special challenges she faced, and about her career, which is set to complete 10 years, in a media interaction. Excerpts:

Did you meet cerebral palsy patients to prepare for your role?

Himanshu [Sharma, screenwriter] and Aanand sir had extensively researched this character and the condition she has. They had spoken to a lot of doctors and charted out her story and made me understand the challenges that I would have to face, the challenges she faces physically. More importantly, he told me she is very brilliant and highly accomplished professionally; an achiever. And nothing should take away from that aspect.

I understood that I had to correctly represent this character. So I wanted to take the right measures, meet the right people. I was involved with an occupational therapist for two and a half or three months. I understood the limitations of the character. I also had to understand how someone with this condition can feel so confined when you are restricted in movement and are just sitting in a chair every day.

As an actor you also use your physicality a lot to perform. I, obviously, would not be able to do that. I had to create this involuntary action, which is like a spasm when there is lack of control on the muscles. But I had to create it voluntarily while focusing on the dialogues and emotions. That was very hard to do. But I followed Aanand sir and Himanshu’s vision.

Did you say yes to the film instantly or did you take your time since it is such a challenging role?

I never say yes at first go. Woh kuchh problem hai mereko [I have this problem]. I need to process it. When you hear something, you just need time to understand what you heard and what did I like in it. So I always take some time to mull over it.

I was pretty excited that he was offering something like this to me because I knew it was going to be challenging for me to play this role. Also because of the vision he had for the film. It’s a film that celebrates love and imperfection in a larger-than-life way.

I think the imperfections in the film are not because of her condition. That’s the beauty of the film. Everybody has imperfections, even if you don’t have a physical challenge. You can have some other challenge, like Katrina’s character. She has an emotional challenge in the film. Similarly, all of us in our everyday lives are challenged by something that we have to overcome. Sometimes it is very apparent, like it is in Shah Rukh's character and mine. 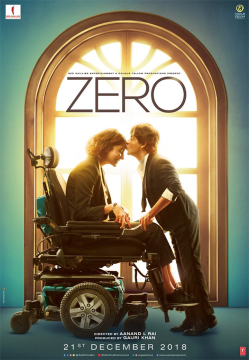 But sometimes it is not very apparent, seemingly so with Katrina’s character who is a star. You would feel, what problem might she have? She has everything. But then you get to know what issues someone might have. Aanand Rai has not limited them to what people see at first.

Your last film with Shah Rukh Khan, Jab Harry Met Sejal (2017), turned out to be a failure.

The #MeToo movement has come to Hindi cinema as well. What was your reaction when all this was coming out?

I was glad that all this was coming out in the open, as it should. It has created a sense of fear in people that nobody can get away with anything that they feel [they can do] being in a position of power. I think that’s a really important step that has taken place and I think things will look better and get better in the future because of that.

The way I look at it, the creative things are moving forward and I am very happy with them. You have to understand that I was very young when I started this production house. So, I think I would like to give myself a lot of credit for having done what I have achieved so far on my own. It’s not that I come from a film background. I have done it on my own with my brother. So for me it’s a big thing.

The names you have mentioned have been working for years. I think it’s important to understand that every case is what it is. I take a lot of pride in what I am doing with Amazon and Netflix. I think it’s a very big deal. Even if I am not acting in it, they still look at us as a viable production house as they are looking at all the other big production houses in the country.