An emotionally charged final day of the 5th Indian Screenwriters' Conference saw veterans Gulzar, Kamlesh Pandey and Javed Siddiqui join the Indian Screenwriters' Association in posthumously honouring the late Shailendra, Dr Rahi Masoom Raza and director KA Abbas for their contribution to film and television writing. The legends have conferred the awards for lyric writing, writing for television and writing for films, respectively.

Presenting the award for lyrics to the late Shailendra's children, Manoj Shailendra, Dinesh Shailendra and Amla Shailendra, Gulzar reminisced the late poet's contribution to his own career. The veteran lyricist admitted that it was because of Shailendra's insistence that he entered the world of Hindi cinema, writing his first song for Bimal Roy's Bandini (1963) - 'Moraa Goraa Ang Layi Le'. 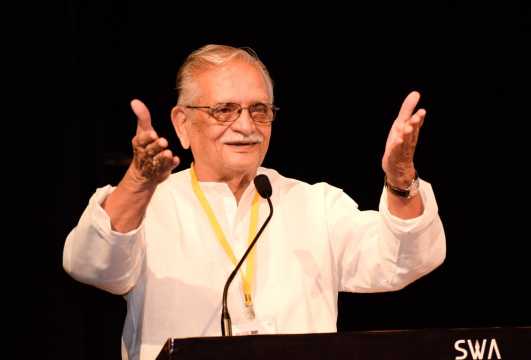 Gulzar added that while his film poetry was one aspect of his writing, it was his love for the common man, his struggles that elevated Shailendra. Pointing to Shailendra's immortal works like 'Mera Joota Hai Japani' from Shree 420 (1955), the lyricist said, "He could say the most complex things about democracy, proletariat, while keeping the language simple. There were many layers to his works, that need to be understood."

Screenwriter of films like Rang De Basanti (2006) and Delhi 6 (2009), Kamlesh Pandey spoke on the contribution of director Khwaja Ahmed Abbas. Noting how the short story by Abbas, Gehu aur Gulab (Wheat and the Rose) was one of the most memorable stories he read as a young man, Pandey credited Abbas for bringing a social consciousness through his writing and films.

"KA Abbas played an important role in bringing sense and sensibility to Hindi cinema. He also helped to give the business of cinema the much-needed respect which till then was looked down upon by the society. His films are also ingrained in my DNA and have influenced my work. Most importantly he also played a pivotal role in helping writers get their much-needed respect," Pandey said.

Pandey also noted that during their research on Minimum Pricing Agreement for writers in the industry, they came across an old handwritten copy of Abbas' where he had noted down the remunerations for writers and lyricists. Sadly, Pandey added, the issue continues to remain the same even though Abbas had come up with the thought first in the 1960s.

The award was accepted by Abbas' granddaughter, actress Neelima Azim, who broke down in tears while thanking the audience for the honour. 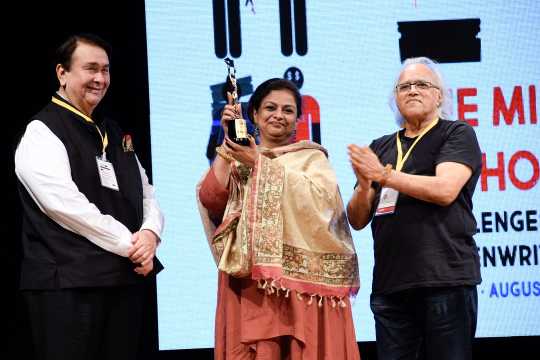 Writer Javed Siddiqui was given the honour of speaking on Dr Rahi Masoom Raza, who was honoured for his contribution in the field of television. Following the three-minute audio-visual on the late writer's contribution, Siddiqui took the stage to regale the audience with stories on the depth, style and nature of Dr Raza's character.

Recounting a time when, as a journalist, Siddiqui had launched a bitter critique against Dr Raza, the late doctor had walked into his office and had a debate over hours trying to understand Siddiqui's point of view without expressing any bitterness. Siddiqui added, "He was a man who would never turn a philosophical argument into a personal one."

Although it is his work as the writer of BR Chopra's Mahabharat that earned him great fame, Siddiqui said, "Rahi saab was a multifacted personality and the writing he did for television only provided a glimpse of it. He was also a great poet and never lost his values and integrity even while working in a completely commercialized Hindi film industry."

The son of Dr Raza, cinematographer Nadeem Khan and wife, Parvati, accepted the award on his behalf.