Dulquer Salmaan: It was difficult to convince my parents that I wanted to act


The Southern star discusses his Hindi debut film Karwaan, his comfort with the language, and why he could relate to his character Avinash.

Dulquer Salmaan is a bona fide movie star in the South. Yet, he is not like your typical Southern movie star. You can put that down to his choice of films, sensible and meaningful, and the kind of characters he plays in them. Indeed, they make you forget that he is actually the son of Mammootty, one of the biggest movie stars of the South.

Dulquer Salmaan has no starry airs as he sits down to discuss his Hindi film debut, Karwaan, which also stars Irrfan Khan and Mithila Palkar, the difference between working in the Southern film industries and in Hindi cinema, and the difficulty of being a so-called star son. Excerpts from the interview:

How do you find this whole promotional process here? It is not so heavy down South, I believe.

I feel that everyone who is coming for the interviews and interactions, they have all done their homework. They have all read up stuff; even if it is basic Googling. If they do that, we are both respecting each other’s time. I have done promotions down South where during some interviews they give you the mic and they are like, ‘Sir, speak!’ And I am like, ‘What? What am I going to say?’ (Laughs.) It’s not so interactive. So, this [promotions in Mumbai] I genuinely appreciate. Not everybody is aware of my work [here]. So, it’s nice that they are making that effort. In a way, I am enjoying it, though it is hectic.

Your director, Akarsh Khurana, told us that you didn’t need much help in mastering Hindi. How did you manage?

I am just familiar with the language. It was my second language at school. So, we had to read and write it and speak it in class. And I have lived in Bombay for six months. I have lived in Dubai where there is a lot of Hindi. My college in America had a lot of Indian students, who were predominantly North Indian.

Mithila [Palkar] said last week that she was worried about working with Irrfan Khan because he is a big actor. You also said recently that you were scared of working with him for the same reason.

It’s a good fear. It’s out of respect.

How did you both break the ice with him?

I think he did it for both of us (laughs). I am sure somebody of his stature knows and can sense it when there are younger actors or youngsters around who are a bit intimidated.

What exactly is your character in Karwaan?

Avinash is someone who is not happy with the way his life has turned out. He had different hopes and dreams, but it wasn’t how it panned out. Therefore, he is mentally ageing faster than he should be. He is unhappy and living a very clockwork kind of life. I have kind of been there a little bit before I started acting. I didn’t like what I was doing. I wanted to do something creative. So, I could relate to that space that Avinash is in.

You recently said it is difficult to be a star son…

In Malayalam there have never been, at least when I was starting out, many second-generation actors who had made [it big]. When we were in school we loved movies and had the deep desire to act. I don’t think any of us saw it as an opportunity. I think most Malayalam actors educate their kids to other directions because there is no guarantee.

What has worked in my favour is that I don’t look too much like him [Mammootty]. So, I have been able to have my own identity. I think our personalities are very different.

Do you discuss your films with your father?

First, he is busier than me. He does like six to seven movies a year; I do three to five. So, I don’t think there is time for that. Also, he kind of wants me to make my own choices and learn on my own. Right from the beginning nobody guided me; do your own thing. He said, ‘If you fail, you still have home, shelter and food.’ 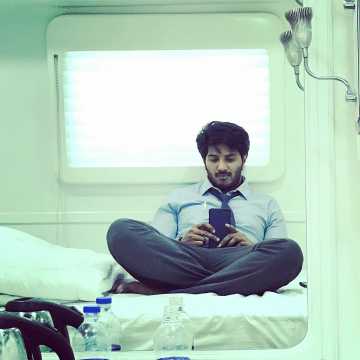 You are known for doing meaningful or sensible films. But in the interiors it is still those larger-than-life masala films that work. That has not changed much. What do you think of this?

I genuinely think everything is to be made. I am just glad to be able to get the films that come my way. I am glad to have continuous work. I really like the movies I make and I am happy to connect with a percentage of the audience. But at the same time I love the larger-than-life films as a viewer. I connect to those also. I think we can do everything and be happy with it. I don’t think one is better or worse. We need everything.

In the past quite a few actors from the South entered the Hindi film industry. But somehow they couldn’t succeed much. Do you think right now is the best time for a crossover actor as people have started appreciating films from different industries?

I don’t think you can take anything away from those actors. A lot of times we as actors have to choose from what comes our way. Primarily you are always going to be offered more work from your primary industry and then the stuff that’s made here [Hindi cinema]. A lot of times people say that South Indian actors have tried and failed. I don’t think it is failure. They got a few offers and did a few films, but that’s all it is.

Did you find any major difference or similarity between the functioning of Southern cinema and Hindi cinema?

It’s more technical here on the production side. It’s bigger and more organized here and it’s got a very international kind of system in place. It’s like Hollywood or the studio culture the way productions happen. But the thing I found common across all industries is just the love for the movies. Everybody is out to make good cinema, at least all the movies I have worked in.

In Malayalam we have tiny budgets. We are shooting in this hotel where what you [Hindi cinema] will get seven days to shoot, we have to finish in three. So, I don’t have [proper] timings, Sundays or public holidays. We just work. Each schedule is minimum 40 days.