The makers have released a teaser poster of the film. It creatively merges the image of a gun with the yesteryear mills of Mumbai.

Filmmaker Samit Kakkad has announced his next Marathi film with Ameya Vinod Khopkar Entertainment and Purple Bull Entertainment Pvt. Ltd. Titled Bachchan, the film is set to go on floors in September or October this year, and will be shot in Mumbai and parts of Maharashtra. The cast of the film has not been announced yet.

Speaking about the film and the intriguing title, Kakkad said in an official statement. “I am a huge Amitabh Bachchan fan. Bachchan is a script that is very close to my heart and when I narrated the film to Ameya Khopkar and Swati Khopkar, they both shared my excitement. This is my tribute to the legend himself and is a gritty action drama.” Co-incidentally, Kakkad also shares his birthday with Bachchan.

The makers have released a teaser poster of the film. It creatively merges the image of a gun with the yesteryear mills of Mumbai. 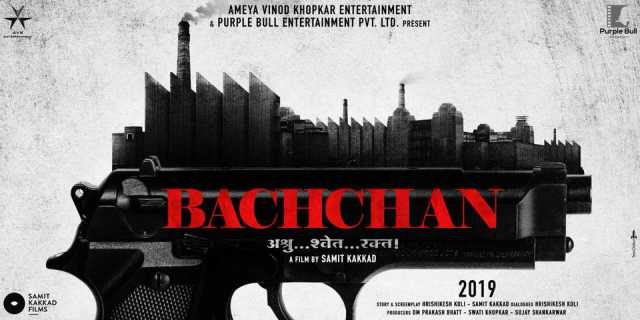 “Bachchan is a film unlike any other, weaving in reality into fiction so seamlessly. I had never read anything so interesting and I am happy we are producing it. Samit is an extremely talented director and we are positive that the audiences will love the film,” Ameya Khopkar said. His banner has previously produced hits like Lai Bhaari (2014) and Ye Re Ye Re Paisa (2018).

Kakkad has so far helmed Marathi films like Aayna Ka Bayna (2013), Half Ticket (2016) and the unreleased Hindi film Ascharya Fuck It (2018). Half Ticket has been to 28 festivals and won 31 awards across the world.

Kakkad further said that they haven’t decided on the release date for a reason. “This is my dream project and right now all our efforts are into making the film we set out to make. It is a grand film and I don’t want to work with pressure on having set a release date,” he added. However, the film will hit the screens in 2019.

Kakkad and Hrishikesh Koli are credited for writing the story and screenplay, and the latter has also penned the dialogues. Koli is currently writing Ye Re Ye Re Paisa 2 for Ameya Vinod Khopkar Entertainment.