Atif Aslam chips in with a soulful performance, but the poor CJI in a particular portion is mindboggling.

Salman Khan film's Loveratri is gaining popularity for its music. After the songs 'Akh Lad Jaave' and 'Chogada', the makers have released an Atif Aslam number 'Tera Hua'.

The romantic song has been written by Manoj Muntashir, but the lyrics can best be termed average. The song is lifted by the sheer quality of its score and by Atif Aslam’s enchanting voice.

Tanishk Bagchi's soft and soothing tune is a delight. Backed by such good music, Atif Aslam really comes into his own. The music and the singing grip your attention throughout.

As for the picturization, the song has Sushrut (Aayush Sharma) asking Michelle (Warina Hussain) out for a date. The tour guide that he is, Sushrut takes Michelle around Baroda.

Often couples, at least middle-class couples, use a two-wheeler to roam around the Gujarat city. For the young man, a two-wheeler also helps to get really close to his beloved. 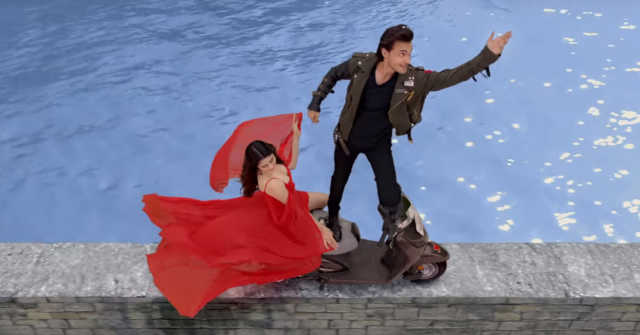 The sights of Baroda are impressive, but the stunts that Sushrut and Michelle pull off on the two-wheeler leave you in disbelief. While we all know that fantasy is a key element of romantic Hindi film songs, the poor computer-generated imagery of the scooter running on the parapet along a lake while Sushrut balances on the rider's seat and handle is too far-fetched even for a fantasy. Besides, the poor quality of the picturization of this portion hurts the song.

If you ready to overlook this boo-boo, the 'Tera Hua' song is still an endearing romantic number. Watch it below.

Loveratri is set for release on 5 October. Tell us if you will be watching this film in the theatres.