Film producers' association welcomes move that is ostensibly meant to benefit viewers who are only proficient in Hindi.

It has become fairly common to see Hindi films with the opening and closing credits in the English language. But that will change, by order. The Union information and broadcasting ministry has issued a directive to all Hindi film producers to have the credits in Hindi.

The government has left the choice of having credits in two or more languages to the producers, but Hindi is now mandatory.

The ministry said the decision was taken to benefit those members of the audience who are only proficient in Hindi. If the language of the film is Hindi, why shouldn’t it have Hindi credits, the ministry asked. 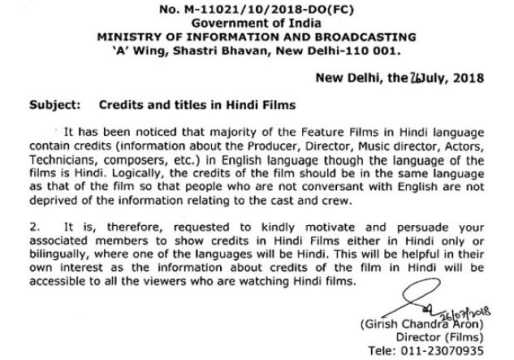 “This is a good move," Aggarwal said. "We are Indians, we should not be ashamed to have the titles in Hindi. In the past, we used to have credits in three languages, Hindi, English and Urdu.”

Sinha said, "Most of our films are in Hindi and other regional languages. For Bhojpuri films, we carry the titles in Hindi. It’s a good move by the government. This will benefit most of our audiences in the small towns, who are not proficient in English."