Jayshree Gadkar got the kind of roles no other actress did, remembers Bal Dhuri


On the legendary star's 10th death anniversary, her husband, also a veteran of the stage and film, remembers her dedication to her craft.

All photos except the last one from Bal Dhuri&#039;s biography on Jayshree Gadkar titled Nakshatralena
give your opinion

More than 60 years after she entered films, Jayshree Gadkar remains one of the legends of Marathi cinema.

Apart from Marathi and Hindi cinema, Gadkar acted in films in Gujarati, Marwari, Punjabi, Telugu and Tamil. Over a career spanning close to half a century, she did nearly 250 films.

For the actress's tenth death anniversary (Gadkar died after a brief illness on 29 August 2008), Cinestaan.com went down memory lane with her husband and stage and film veteran Bal Dhuri.

Highlighting her contribution to cinema, Dhuri, who played Dasharath to Gadkar's Kausalya in Ramayan, said, “She worked in films for around 50 years. She played tamasha artistes, did sensible roles, played a Brahmin girl, did comedy. In Mohityanchi Manjula, she played a braveheart and performed sword fights. She also did Bhalji Pendharkar’s Sadhi Manasa, where none of the artistes used make-up. She played a blacksmith's wife in the film. I don’t think any other actress in the industry got to perform such a wide variety of roles."

Not many know today that before entering films, Gadkar got a chance to perform in front of the visiting prime minister of the erstwhile Soviet Union. “In 1954, Russia’s prime minister was supposed to visit Shivaji Park [in central Bombay]," Dhuri recounted. "[The great music director] Vasant Desai had organized a big function at the place and was looking for a few girls [to perform at the event].

"Jayshree was learning dance at Shyamala Majgaonkar’s classes in Girgaum [in south Bombay],” he continued. “She was selected for Desai’s event and performed to [the Marathi hit song] ‘Latpat Latpat Tuzha Chalana’ [from V Shantaram's hit Amar Bhoopali (1951)]. She was 12-13 at the time and did not even know how to drape a navvari [nine-yard traditional Maharashtrian] saree. She was wearing her mother’s saree.”

This event brought Gadkar her first film. “A photographer in Pune had displayed her pictures from the performance. Director Dinkar Patil saw the photos and offered her a role. But she said she will do it only if it is a full-fledged role of a heroine. He said this isn’t the role of the main heroine, but there are two songs with Raja Gosavi. This was how she did her first Marathi movie Deesta Tasa Nasta (1956).”

Gadkar had appeared before in a song sequence in a Shantaram movie. “She did Jhanak Jhanak Payal Baje (1955). For that film also she was selected from her class. She had danced in the chorus with Sandhya,” Dhuri remembered.

Dhuri believes director Anant Mane's Sangatye Aika played a big role in furthering Gadkar's career. “That was a tremendous break for her," he said. "Her song ‘Bugadi Majhi Sandli Ga’ is still remembered.”

Dhuri shared an anecdote about the shooting of the song. “The word ‘haay’ appears in the song a few times," he said. "Jayshree improvised and crinkled her nose. The director liked it. Ashatai [Bhosle] later joked that we still don’t know if the song became a hit because of the way I said ‘haay’ or the way Jayshreetai crinkled her nose.”

Shooting simultaneously for Ranga Panchami (1961), a film in which Gadkar played the double role of a tamasha artiste and a housewife, and Manini (1961) was a real challenge, he said. “Both characters in Ranga Panchami are poles apart and it was difficult [to perform them]. At the same time, she was shooting for Manini, where she played a Brahmin girl from Kolhapur. So, she was playing three characters simultaneously during that period.”

Gadkar's tamasha performances in films became very popular, but Dhuri pointed out that she did only eight to ten films in which she played a tamasha artiste. (Tamasha is a folk art form in Maharashtra that involves song and dance.) More of her films were socials. "But people felt that just because she became popular for the Sangatye Aika song, she was a tamasha actress," he said. However, Gadkar soon changed that image out with her performances in films like Mohityanchi Manjula, Sadhi Manasa and Manini.

Dhuri said Gadkar acquired perfection in tamasha by studying the artistes closely, just as she did her homework for other roles. “She observed real blacksmiths in the bylanes of Kolhapur in a burkha to play one in Sadhi Manasa," he revealed. "To do the same actions and also give lip movements is very difficult. It means observation, study and hard work can help you achieve anything.”

Dhuri remembered another interesting incident that happened during the shooting of Bijli (1986), another film in which Gadkar portrayed a tamasha artiste. “In one scene, she spat out paan. Someone asked why she did it as this wasn’t part of the scene. She said this is exactly how they do it.”

Gadkar learnt how to play a pregnant woman by chance. “While going to Kolhapur, she used to see a corn vendor at a station. That lady always sold her a puda of corn when the train halted there. During one visit, she didn’t do that,” he said. “Jayshreebai called out to her. The lady somehow managed to get up; she was pregnant. That is when she observed how a pregnant lady moves.” 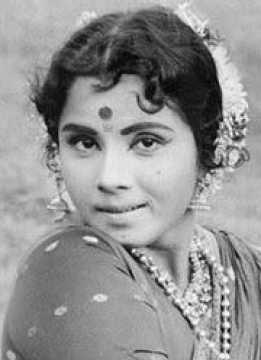 Gadkar did as many as 24 films with Suryakant, the great Marathi actor, artist and writer from Kolhapur, 17 with the popular Arun Sarnaik, seven with Dr Shriram Lagoo and eight with Dhuri. And, astonishingly, she played at different times mother, wife and love interest of Vikram Gokhale and also wife and daughter of his father, Chandrakant Gokhale.

Gadkar was appreciated in her role as Kausalya in Ramayan, but actually she did not want that role. “Jayshreebai told [producer-director] Ramanand Sagar that she wished to play Kaikeyi," Dhuri revealed. "He kept looking at her and said, ‘If I give you Kaikeyi’s role, people will abuse me.’ When she persisted, he said he would give her the role provided she found another actress to play Kaushalya. Now how was that possible?”

Dhuri revealed that when the serial was being shot, the team was not sure if it would become successful: “We had no idea how a mythological series would be received. That’s why Ramanand Sagar told us, ‘Chhoti si serial bana raha hoon [I am making a small teleserial].’ But the series gave everyone name and fame around the world. Roads used to be deserted when it was telecast. When we went to Mauritius, an officer at the airport told us the serial was running there as well!”

Gadkar wasn’t comfortable with Dasharath's funeral scene in the serial. “After Dasharath’s death scene, Ramanand Sagar said he would shoot the funeral scene the day after the next," Dhuri recalled. "I said, ‘I have no problem. I just have to sleep' (laughs). But this made Jayshreebai uneasy. Later she secretly told Sagar’s wife to request him not to shoot the scene that day because it was Vat Pournima. Ramanand Sagar agreed and decided to do it after four-five days.”

Dhuri also recalled Gadkar's response when a journalist once asked her which award she was eyeing. "She said, "I am not thinking about it. The biggest award for me is the love of the audience. If you get something without asking, you get milk. But if you ask for something, all you get is water’.”