Anushka Sharma, Virat Kohli, Rohit Shetty and Randeep Hooda are among the celebrities who have come to the state's aid.

Even as Kerala recovers slowly from the floods that left over 300 people dead and thousands homeless, the country has been rallying to the help of the victims.

Hindi film personalities like Amitabh Bachchan, Shah Rukh Khan, John Abraham and Sushant Singh Rajput have been at the forefront making contributions, both in cash and kind, to the Kerala Chief Minister's Distress Relief Fund.

Some reports said actor Salman Khan, known for his charitable work and his Being Human foundation, which works for education and healthcare among the poor, had also donated a large sum of money.

Veteran actor Jaaved Jaaferi took to Twitter in praise of Khan. However, barely 24 hours later, he deleted his post, which said, "Heard Salman Khan donated Rs12 crore for Kerala. This man is something else. Kitnon ki duaein leke chal rahe hain [He is blessed by so many]." 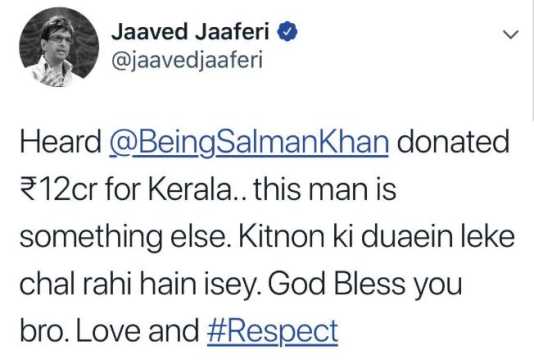 Jaaferi was criticized after the post was published with Tweeple questioning the sum mentioned. Taken aback, Jaaferi first reminded everyone that he had mentioned the word 'heard' in the post. Later, he deleted the tweet.

"I had tweeted that I had ‘heard’ about @BeingSalmanKhan‘s contribution. Because it was a very strong possibility given his track record, I put forward my thoughts and admiration. Taking the tweet off till I can confirm it," he wrote.

I had tweeted that I had ‘heard’ about @BeingSalmanKhan ‘s bcontribution. Because it was a very strong possibility given his track record, I put forward my thoughts and admiration.
Taking the tweet off till I can confirm it

Meanwhile, there was no debate over the contribution made by Kangana Ranaut. The Queen (2014) actress donated Rs10 lakh. She even received a letter of appreciation from the Kerala government for her contribution. 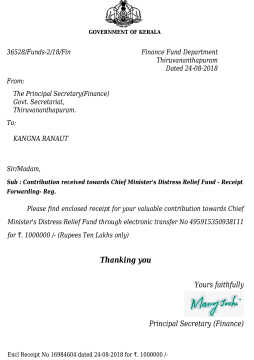 Actress Anushka Sharma and her husband, India cricket captain Virat Kohli, have reportedly sent a truck with food and medicines for animals affected by the flood.

The Economic Times, a daily, quoted a source as saying, "Anushka and Virat are sending a truck loaded with food and medicines and support systems for the animals in need. They have teamed up with a local animal rights NGO and are helping to send rescue teams comprising eight members for rehab and treatment. Rescue teams will be looking at rescue of strays in Kerala and the protection of wildlife. They will look to provide support and care to the animals that are in need for urgent help."

Actor Randeep Hooda visited the state to offer help. The Sultan (2016) actor joined the Khalsa Aid team in the state to cook for people in the relief camps.

Producer-director Rohit Shetty has donated Rs21 lakh for the cause. A source close to Shetty said, “For a few years now, Rohit has been supporting cancer patients and girls’ education. The latest cause he chose to associate with is the Kerala flood relief work. The filmmaker knew he had to extend his support to those affected in his own way. He did that quietly without letting anyone know.”