The veteran actor breathed his last today in Mumbai at the age of 63.

From the mid-1980s onwards through the 1990s, it appeared as if Marathi cinema was becoming synonymous with comedic cinema. The comedy in films made in this era was of both kinds, slapstick and situational.

Generally one associates the likes of Ashok Saraf, Laxmikant Berde and Sachin Pilgaonkar with this era and this genre. But the list would be incomplete without a mention of the talented and natural comic artiste Vijay Chavan.

Vijay Chavan, who came to cinema from theatre, was one of those actors who could consistently make an audience laugh both on screen and on stage. His death in a suburban Mumbai hospital of a lung ailment at the age of 63 on Friday has naturally left a large section of the film- and theatre-loving audience in Maharashtra in tears.

Like many other accomplished film artistes, Chavan started out on stage and was quickly accepted as a comedy specialist. In fact, he soon became one of the more popular actors on the Marathi stage. Some of his prominent plays in this period were Shrimant Damodar Pant, Bhagam Bhag, Prem Chalu Aahe, Tu Sukhkarta, Sasrebuva Zara Zapun, and Shriyut Bhola Dambis. 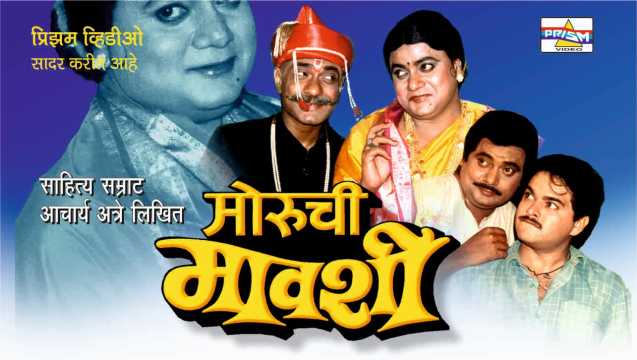 But the play that brought Chavan maximum popularity was Moruchi Mavshi, penned by the legendary Prahlad Keshav Atre aka Acharya Atre. Chavan played the female role of the mavshi, or maternal aunt, in the play. The manner in which he effortlessly played a female role by cross-dressing in a saree was impressive. In fact, he was so good that you often forgot that the artiste wasn't female. Short videos of Chavan’s dance from the act still go viral on social media platforms.

Remembering the one and only Acharya Atre, literary giant and daring filmmaker

Chavan’s foray into cinema happened in the 1980s with a small role in director Kumar Sohoni’s Vahinichi Maya (1985). His first prominent role came in his next film, Vinay Laad's Gholat Ghol (1988), in which he played Mahesh Pathare, the best friend of Laxmikant Berde’s character.

While Chavan was best known for his comedy, he was not just a slapstick comedian. He could also make people laugh by acting sensibly. His Kanole from Kedar Shinde’s Jatra is a shining example. Chavan played the helpless landlord who struggles to get the rent out of a group of youngsters played by Bharat Jadhav, Siddharth Jadhav, Sanjay Khapre and Kushal Badrike. Without resorting to conventional comedic antics, he managed to entertain every time he came on screen.

You know you are looking at a great performer when you can't miss him even in a crowd of talented artistes. Chavan had this ability to make a mark even in a multi-starrer. In his early years, he managed to create an impact in the face of established stars like Berde and Saraf. And he could do that even in a small role in his later years. For example, his character of a policeman did not have much screen time in Zapatlela 2, another film with an ensemble cast. Yet, those who saw the film will never forget the character or his mannerisms.

Chavan was awarded the prestigious V Shantaram Gaurav Puraskar in April this year. Speaking to the ABP Maza news channel on the occasion, the actor, humble as ever, had said he never expected the honour. “I received a call and got a shock," he said. "I had never imagined I would get such a big award!"

The veteran recalled the days he and his colleagues used to perform one-act plays at Chhabildas high school in Dadar in central Mumbai. "We didn’t even have money to buy the delicious batata vadas [fried potato savouries] that used to be sold there. I and artistes like Sulabhatai Deshpande used to collect money and eat vadas. From that situation, I have come here.”

A pity it ended all too soon. It is not just the auditorium at Chhabildas that will miss Vijay Chavan.