On his 68th birthday (Sharat Saxena was born on 17 August 1950), the veteran tells us how he almost never played Ronak Singh, one of his best villain roles.

Photograph: Shutterbugs Images
give your opinion

In a career in which he mostly got to play a heavy or one among an assemblage of villains getting pulped by the hero, Sharat Saxena has been in innumerable fights on screen.

But his best known probably is the final battle — admittedly a hard-to-believe sequence — in Vikram Bhatt’s Ghulam (1998), a film in which Saxena played the main villain and for which he was even nominated at the Filmfare awards that year for Best Villain, losing out to Ashutosh Rana for Dushman (1998).

To read the full interview with Sharat Saxena, click here

Yet, Saxena, who has had to struggle throughout his career to get meaty roles, almost did not get to play the role of Ronak Singh aka Ronnie, and it was only the dogged insistence of Aamir Khan, the film's star, that saw the scales tilt in his favour. 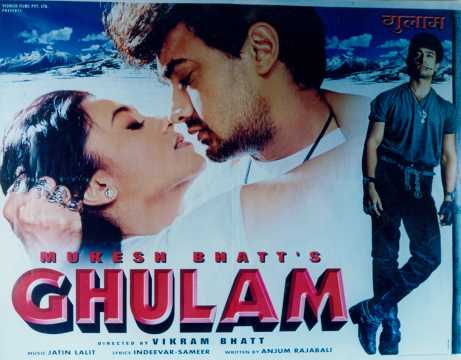 "Ghulam was a well-made film," Saxena recalled in a conversation with Cinestaan.com. "I got a lot of appreciation. If that film had not come, I would be nowhere. That film was my re-entry to the film industry.

"But the funny thing was that nobody in that film wanted me. The writer [Anjum Rajabali] told me frankly I didn’t want you, I wanted a star. [Producer] Mukesh Bhatt didn’t want me either."

Mahesh Bhatt was supposed to direct the film earlier, and later Vikram Bhatt came on board as director. But, according to Saxena, even they were not convinced about his ability to play the role.

"Nobody wanted me in the film because Aamir Khan had recommended my name," he said. "They [the film's makers] said Sharat only does small roles, he is not good enough for this. Still, Aamir insisted that I be cast. So their new excuse was that he has shifted to Chennai."

Saxena said the film's team got as many as 20 different actors, including Mukesh Rishi and Ashutosh Rana, to audition for the role. Eventually, they zeroed in on Rishi and gave him a signing amount.

Then the film got shelved. When the project was revived after a year or so, Saxena was working in a film called Duplicate (1998), starring Shah Rukh Khan and directed by, yes, Mahesh Bhatt.

"Now Mahesh Bhatt couldn’t say I wasn’t living in Mumbai!" he smiled. "Aamir again said why don’t we have a meeting with Sharat Saxena."

The meeting was held at Aamir Khan’s place. The subject was narrated to Saxena. Then Mahesh Bhatt asked him, “Do you want to do this film?" Saxena said yes. Bhatt then asked him to go and meet Mukesh Bhatt and agree to the terms.

Mukesh Bhatt told Saxena he would pay him Rs2 lakh for the role. That was what Saxena got for a crucial role in a film that went on to become a blockbuster.

"Rajabali used to come to the set everyday for the first 10 days," Saxena said. "He saw the rushes and he and his wife both agreed that I was the best choice."

Rajabali told Saxena that when he wrote the character of Ronak Singh, he had an image in mind. "You erased that image and put yourself there in my mind, he said. It was a great compliment for me," Saxena said.