Ramshastri: 5 reasons why this Gajanan Jagirdar movie is relevant and relatable even today


On the actor's 30th death anniversary (he died on 13 August 1988), we revisit his classic film in today's socio-political context.

Gajanan Jagirdar was an actor, director, writer, teacher and author, all rolled into one. He was active in both Marathi and Hindi cinema from the mid-1930s and continued working till the late 1980s. As an actor, he was known for his work in films like Meetha Zahar (1938), Padosi (1941), Ramshastri (1944), Apradhi Kaun (1957), etc. He was also known for directing a few films, including Ramshastri.

Interestingly, he initially came on board just as an actor in the Prabhat Film Studio movie, while Raja Nene was given the responsibility of directing it. But the latter walked out of the film while it was in the making and Vishram Bedekar was brought in his place. However, he too quit the project midway, which then compelled Jagirdar to complete the film himself.

Ramshastri is based on the life of Ramshastri Prabhune, who was the chief justice in the Maratha Empire in Pune. The film traces his journey as an uneducated child who goes onto become a scholar and ultimately bags the place of chief justice through the use of his wisdom and honesty.

It has been more than 70 years since the film was released, but it continues to be relevant even in 2018. In fact, it is more relevant today than it was around five or 10 years ago. Here’s revisiting Jagirdar’s film in today’s socio-political context.

Love is a crime

The film has a sub-plot of two young lovers wanting to marry each other. However, the social customs and even the rulers are hell bent on punishing them for falling in love. Ultimately, Ramshastri ensures that they get married. The story is quite relevant even today, as lovers being killed in the name of honour is not unheard of. Films like Sairat (2016) being made today stand testimony to this fact.

The biggest twist in the story arrives when Anandi (Lalita Pawar) forces her husband Shreeman Raghunathrao to kill his own nephew in order to become the next Peshwa. Raghunathrao, later on, feels deeply guilty for his act, but it’s too late. Unfortunately, political murder is not an alien phenomenon today either. The only difference is that the perpetrators don’t show any remorse like Raghunathrao did in the film. It is said that everything is fair in love and war. And politics has become an unofficial war over the decades.

The film also touches upon the practice of the law not being equal for all when Visajipant Subhedar is accused of looting the British. Ramshastri has to struggle to make everyone understand that a VIP can’t be above the law. There also comes a moment where Sakharambapu (Prime Minister) warns the jury of dire consequences if they hold Subhedar guilty. Numerous current examples of people in power going unpunished can be cited. We have even seen the worst — judges being killed.

Blind followers of the rulers 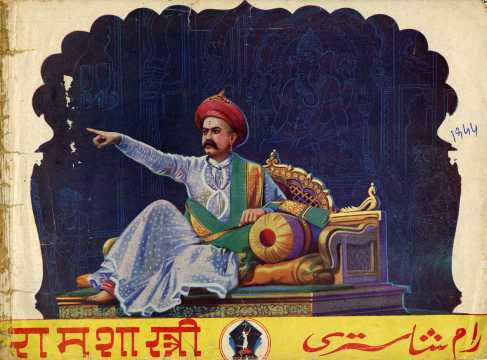 In the latter part of the film, despite the rulers openly carrying out crime and atrocities, the film subtly shows a section of the general public that still considers them incorrigible. Over the last few years, there has been a rise in the blind followers of the ruling class who can go to any extent to justify an act of their leaders. Such messages on social media and WhatsApp are not lost on anyone.

No place for the honest in politics

The film ends with Ramashastri ensuring justice is served as Raghunathrao and his wife Anandi are held guilty of killing their own innocent family member. However, he resigns from the post of the chief justice of the Peshwas and migrates to another village with his family. Without saying anything, he conveys the message that there is no place for honest and ideal people in politics.