The making of Jaane Bhi Do Yaaro would have been a bigger hit, says Pavan Malhotra


The veteran actor was production assistant on the Kundan Shah directorial, but he ended up doing even odd jobs on the sets.

Even three and a half decades after it was made, director Kundan Shah’s Jaane Bhi Do Yaaro (1983) remains just as funny and relevant as it was the day it was released, 12 August 1983.

Veteran actor Pavan Malhotra was a production assistant on the film, his first experience in Hindi cinema. Malhotra, who went on to play the lead in Saeed Mirza's Salim Langde Pe Mat Ro (1989) and the gangster Narang in Farhan's Akhtar's Don (2006), and has also been seen in several popular soaps on television, spoke to Cinestaan.com for the 35th anniversary of the release of Jaane Bhi Do Yaaro.

Like many fans of the cult classic, Malhotra also found it hard to believe that 35 years have passed since the film's released. “Time has flown so fast," he remarked. "There are so many stories to tell and not much time.

"We started shooting on 26 March 1982 at Byculla bridge [in central Mumbai]," he began recounting his memories. "We had to suddenly shoot there because we came to know that was the last day we can shoot at that place and we won’t get it after that.”

Malhotra's first film job was on Richard Attenborough’s Gandhi (1982). “Somebody called me and said they needed someone for a week. But then they kept me for months and said they don’t want to lose me! That was the first time I ever saw a film shoot,” he recalled.

Malhotra, however, added that films like Jaane Bhi Do Yaaro are made only through the passion and commitment of every single person involved. "Even those working on daily wages used to watch and enjoy,” he said.

The film certainly changed Malhotra's life. For one, he moved to Bombay, as the city was then called. "I had come to perform in a play here, and I was offered this film as a production assistant," he said. "It was like, one can come and see and leave if one dislikes it. I always used to wonder who would hire me in a film.”

The film also meant a lot to its producer, the government-owned National Film Development Corporation (NFDC). "It was the first film that made money for them," Malhotra said. "It completed a silver jubilee [an unbroken run of 25 weeks] in Sheela theatre in Delhi. For this kind of cinema to do this was a big thing. Later it happened again with Salim Langde Pe Mat Ro.”

But Malhotra disagrees with those who label Jaane Bhi Do Yaaro a madcap comedy. “It wasn’t a mindless comedy where people mouth double-meaning dialogues and fall on top of each other," he said. "It had a huge message in the undercurrent. And people of all ages have enjoyed it." A good film, he added, "is one that people watch even 20 or 30 years later, be it Mother India (1957), Mughal-e-Azam (1960), Sholay (1975) or Jaane Bhi Do Yaaro.”

Malhotra was a production assistant on the making of Jaane Bhi Do Yaaro. But as is the case with films shot on a shoestring budget, his tasks weren’t limited to that. “I used to even do the task of a spot boy," he remembered. "We used to lift trunks, serve tea and also do the costumes.”

Given what he had seen during the shooting of Jaane Bhi Do Yaaro, Malhotra believes a behind-the-scenes look at the making of the film, something that is fairly common today, would have been even more successful than the film itself. Unfortunately, that wasn’t the practice then and most of the goings-on went unrecorded.

"The manner in which the film was made at such a low budget with contributions from all amid problems, its making would have been a bigger hit," he remarked. "But even if someone had thought of shooting the making, they wouldn’t have done that since we were keen to save even Rs2!”

Speaking of budgets, Malhotra made a startling revelation. “There was some issue about the budget," he said. "Ravi Malik from NFDC had all the control. If he was told to pay us Rs5200, he used to send only Rs3,000. So we had to borrow money from Naseer and Renu's [editor Renu Saluja's] father. In 1982, two thousand rupees was a big sum.”

Interestingly, the lightmen earned more than the artistes. That was because “they used to get paid according to their shifts," he said. "Quite a few actors got paid Rs3,000-Rs5,000 [as lump sum for the entire film]."

But that did not stop the artistes from being creative. “The actors were improvising a lot. Mostly in the scene where a bomb is about to go off and in the Mahabharat scene,” he said. “Of course, the director knew what they were doing. But the film was such that the actors were given freedom. The set-up was very democratic. You were always allowed to give your suggestions. It was a different matter that Kundan would angrily say, ‘No, no, no.’ But that didn’t mean he was really angry.” 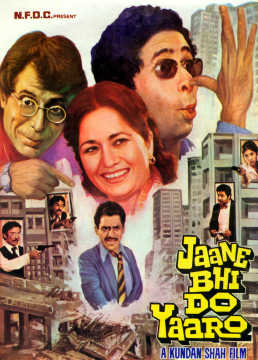 Malhotra said the filmmaker was essentially a simple man, passionate about cinema. “If he disagreed with someone, that person might feel Kundan will never speak to him again. But after a couple of minutes, Kundan would forget everything and speak like before. If he felt there are still five or 10 minutes to pack-up, he would prefer shooting another scene.”

At a festival in Lonavala near Mumbai, filmmaker Sudhir Mishra, one of the writers of Jaane Bhi Do Yaaro, had revealed how, since Naseeruddin Shah used to act only in realistic off-beat cinema back then, it was difficult to persuade him during some crazy sequences. Malhotra agreed.

“He wasn’t convinced about that phone exchange scene," he recalled. "He told Kundan it won’t work. There was a discussion and argument for some time. Finally he did it.