Khan, along with filmmaker Rajkumar Hirani, and screenwriters Juhi Chaturvedi and Anjum Rajabali, will comprise the jury.

Following a huge response to the first edition of the Cinestaan India's Storytellers Contest, one of the jury members, actor Aamir Khan, today (1 August) announced the second edition of what is touted as India's biggest script contest. The first edition, launched in 2017, had seen close to 4,000 entries from across the country.

The contest holds a total prize money of Rs50 lakh, of which Rs25 lakh will be awarded to the best script. With no strings attached, the copyright of the script will remain with the writer. Further, the shortlisted writers will get an opportunity to showcase their scripts to studios and production houses.

Actor Aamir Khan, filmmaker Rajkumar Hirani, and screenwriters Juhi Chaturvedi and Anjum Rajabali, who were on the jury for the first edition of the contest, will judge the second edition as well.

Rohit Khattar, chairman of Cinestaan Digital Pvt. Ltd., said, “I would like to thank all the writers who participated in Cinestaan India’s Storytellers Contest. Our aim was to nurture writing talent in our country and we were astounded by the response of almost 4,000 applicants. While the cash prizes may have been partial incentive, I have no doubt that it was the goodwill and credibility of our amazing jury that further encouraged the participants. I would really like to thank Aamir, Anjum [Rajabali], Juhi [Chaturvedi] and Raju [Rajkumar Hirani] for their unwavering support and commitment of time towards this initiative. Thanks to Anjum, especially, for the extra hours and guidance given as the chairman of the Jury and to my incredible team, who are still wading through the great screenplays. Delighted to take this forward next year too.”

Entries for the second edition will open from October 2018.

Speaking about the contest, Khan said, "Last year when we announced the Cinestaan India's Storytellers Contest, it was an attempt to give an opportunity to budding writers. Given the outstanding response we have got from writers from across the country, I am happy to announce that we will be having a second edition of the contest. We hope that through this contest we are able to reach out to all those who want an opportunity to write a film script." 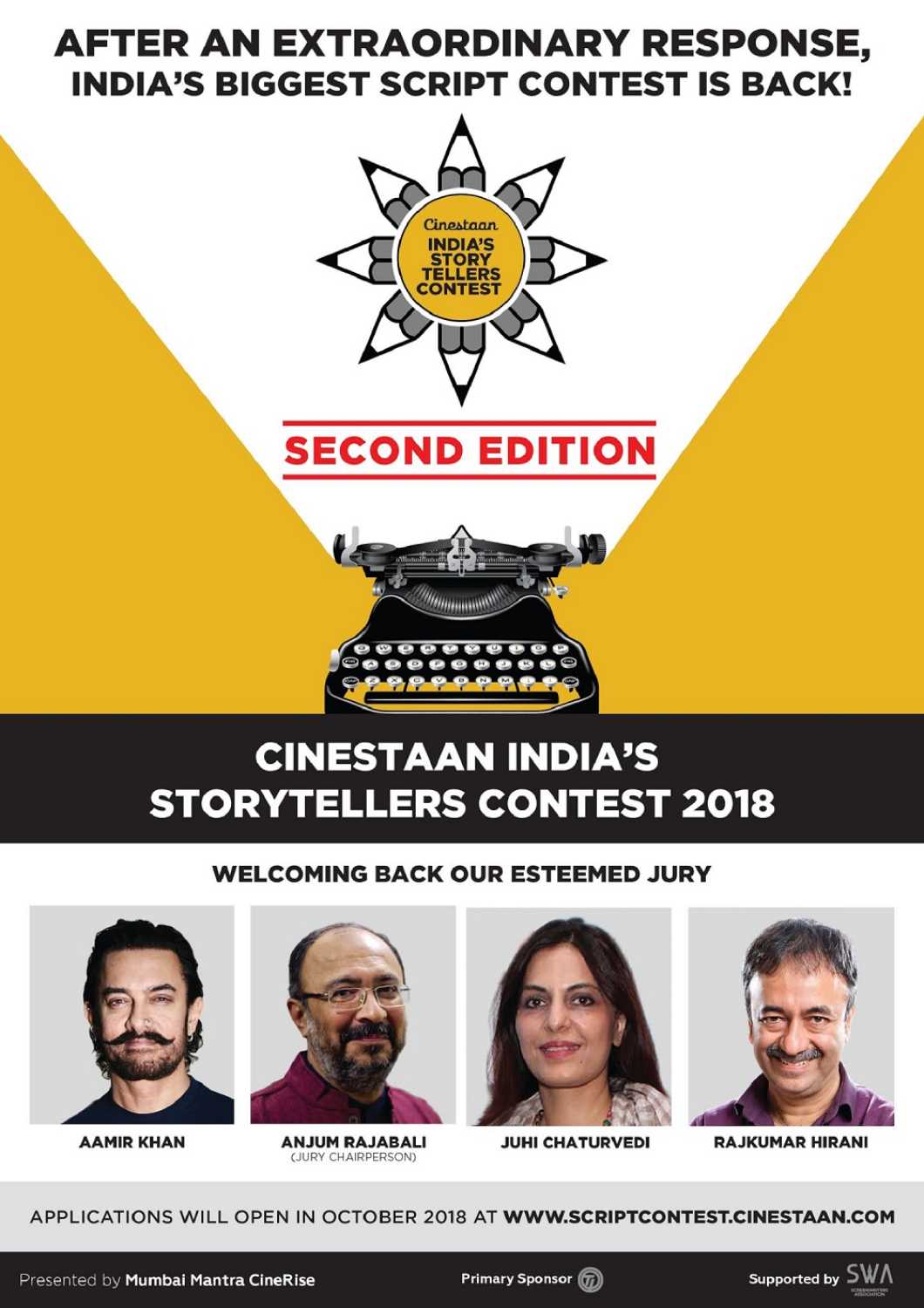 Chairperson of the jury, Rajabali added, "We have been overwhelmed by the response to the contest. We are currently in the process of shortlisting the scripts. The entire process is extremely transparent. This contest has been a booster shot that was needed to catapult writing for Indian cinema to the next level. I am very happy that a second edition has been announced." Rajabali is known for writing films like Ghulam (1998), Pukar (2000) and The Legend Of Bhagat Singh (2002).

Filmmaker Hirani said, "This is a wonderful opportunity for writers and I am happy to be a part of the second edition of the contest. I am looking forward to hearing the story pitches of the writers who have been shortlisted and then go through the final scripts. As a filmmaker, I am excited at the prospect of discovering fresh story ideas and writing styles coming from different parts of the country through these scripts."

Chaturvedi too expressed her excitement, saying, "This contest is helping a lot of aspiring writers get an opportunity to have their work examined by trained professionals. I am very excited at the prospect of reading new story ideas and their treatment. This is a path breaking initiative to give writers the encouragement that they need."

Some of the shortlisted scripts will be curated to be part of the Cinestaan Script Bank — a treasure trove that will be made available to studios and production houses who can then directly liaise with the writers.

The first edition of the contest was launched on 15 October last year and its results will be announced in October this year.