From Baiju Bawra (1952) to Pakeezah (1972), we remember the quintessential performances of the actress who outshone many of her leading men.

It is rare to witness the magic that sheer talent can create on the silver screen and there are precious few performances that stay with you long after a film is over and its narrative has faded from memory.

One such formidable talent to light up the world of Hindi cinema was that of Meena Kumari. To call her an actress par excellence is stating the obvious. Each of her roles remain etched in memory as a gesture, a sweeping walk, a slight arch of the eyebrow, a shy smile, all conveying a range of quiet emotions.

Meena Kumari had the singular talent of executing her roles with restraint, a quality that brought gravitas to each of the characters she played. She died too soon (she was only 38), yet left behind a formidable number of films, made singularly memorable by her presence. Whether it was the tragic roles that she came to be irrevocably associated with or the comic roles that are often ignored, she brought out the emotions of the characters with a unique sensitivity.

On her 85th birth anniversary today (she was born on 1 August 1933), we take a look at some of the most compelling performances through her career.

Baiju Bawra was the story of the angsty, ‘crazed’ or bawra musician, Baiju (Bharat Bhushan), who challenges Tansen (Surendra), one of the prized navaratnas or nine jewels in the court of Emperor Akbar. The film made overnight stars of Bharat Bhushan and the 19-year-old actress Meena Kumari.

The fulcrum of Baiju Bawra is unmistakably its music, composed by Naushad, and sung by classical singers DV Paluskar and Ustad Amir Khan of Indore. Kumari’s joyous exhilaration in 'Jhoole Mein Pawan Ke Aai Bahar' and heart-rendering grief in 'Mohe Bhool Gaye Saanwariya', unveil complex emotions, a remarkable feat for such a young girl. No wonder she won the inaugural Filmfare Best Actress Award for the film in 1953.

Incidentally, director Vijay Bhatt ‘discovered’ Meena Kumari and launched her in Leather Face aka Farzand-E-Watan (1939) as a child artiste and also christened the young Mahjabeen Bano as Baby Meena. 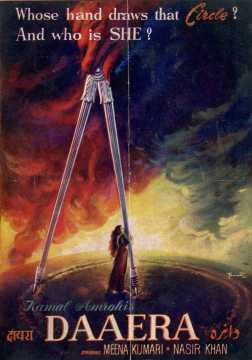 A commercially unsuccessful film, directed by Kamal Amrohi, Daaera featured the story of a young wife married to an ailing, old man. With its slow pace, symbolism and sparse dialogues, the film did not find favour with the audience.

Film historian BD Garga praised Meena Kumari’s performance in the film saying, “Meena Kumari, who plays the central role, hardly speaks in the film, yet leaves a deep impression. She was one of those rare artistes who spoke with her eyes.” Despite its failure at the box office, the film remained one of the actress' favourite roles.

The film is set in Calcutta at the turn of the century where the son of a rich businessman Shekhar (Ashok Kumar), secretly gets married to his neighbor Lalita (Kumari). Lalita’s uncle Gurucharan (Nazir Hussain) gets an irresistible offer from Girin (Asit Baren), who offers to pay off a loan in exchange for marrying Lalita. Now, she is caught in a predicament where she cannot reveal her husband’s name but chooses to remain faithful to him.

Meena Kumari brings a vulnerability and complexity to Lalita and her evocative portrayal remains etched in the annals of film history. Mesmerised by her performance, Roy offered her the role of Paro in his Devdas (1955), but the role was eventually played by Suchitra Sen. 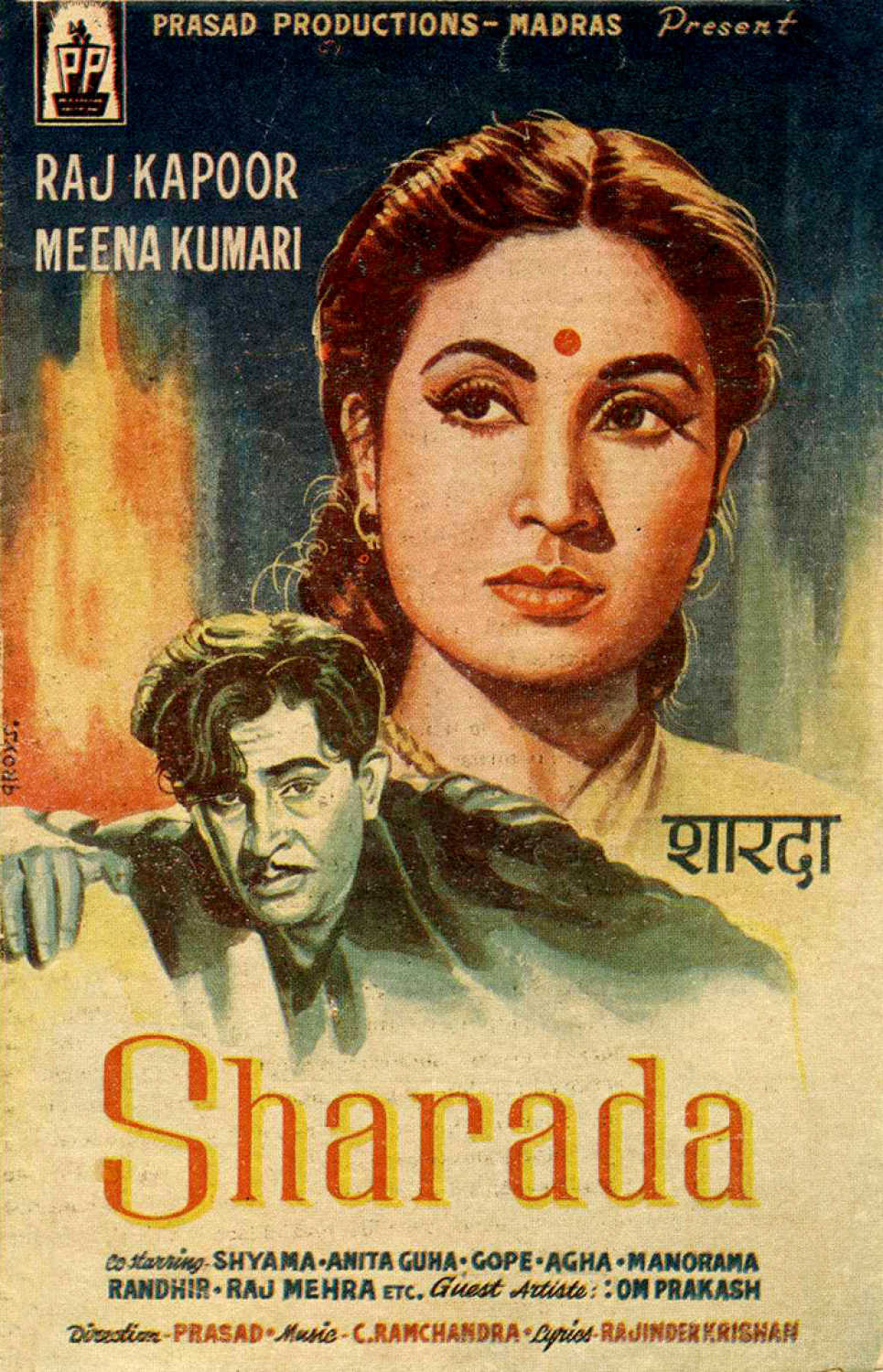 An unusual and bold story, Sharada was legendary filmmaker LV Prasad’s first Hindi film. Starring Meena Kumari and Raj Kapoor, this was another of the actress' films where the woman was at the heart of the narrative.

Shekhar (Kapoor) meets Sharada (Meena Kumari) at an ashram and is bowled over by her devotion and charm. They fall in love and plan to marry but Shekhar must inform his family first. Enroute he meets with a terrible accident and is thought to be dead. In a curious twist of fate, Sharada is sent to care for Shekhar’s father and is persuaded to marry him for the sake of his health and children. She of course, has no clue who he is. But Shekhar is alive and comes home to find an unexpected situation.

The deftly woven narrative is hinged on Meena Kumari’s performance as Sharada, as she is caught in an emotionally complex vortex. She plays a multi-layered character to perfection — charming and self-sacrificing, she chooses to do the right thing in an impossible situation.

Karuna (Meena Kumari) is a caring, dutiful nurse who falls in love with a surgeon at the hospital, Sushil (Raaj Kumar). Sushil’s mother guilts him into marrying Kusum (Nadira) instead, who is the daughter of the man they are indebted to. Karuna is heart-broken but continues to perform her duties with dedication. But Kusum is consumed by jealousy which leads to her ultimate ruin.

This intense film rests on Meena Kumari’s able shoulders as she delivers yet another formidable performance. The cinematography by Josef Wirsching effectively heighten the shades of Karuna’s character, making her the embodiment of Indian femininity. Despite being the ‘other’ woman, Karuna remains above reproach, offering a distinct expression of extramarital desire.

Paeans have been written of Meena Kumari’s nuanced portrayal of Chhoti Bahu as the lovelorn woman aching for her husband to notice her, in the crumbling feudal household that is her home.

The chiaroscuro cinematography of VK Murthy heightens the haunting loneliness and despair of Chhoti Bahu, accentuating the cloying claustrophia within the walls of the haveli that bear witness to her slow ruin. Only Meena Kumari, with her scintillating beauty and personal experience of tormented relationships, could have brought to life the intricately layered character.

Meena Kumari’s swansong was the film that brought her life back full circle. Fifteen years in the making and shelved due to irrevocable differences with her husband and the film's director Kamal Amrohi, the filmmaker and his muse reunited, bearing the ravages of time, for their final masterpiece.

A young, agile, spirited actress began the shooting of this film and by the time it was completed, she was a woman who had experienced much of the sadness and disappointment that life throws one’s way. The mystique of Meena Kumari, heightened by the legends that surround the making of the film, all make for a compelling story both within and outside the film.

Her sublime performance as a courtesan who dreams of leaving her life behind, remains unparalleled. Each of the songs of the film, composed by Ghulam Mohammad, and written by Kaifi Azmi, Majrooh Sultanpuri and Kaif Bhopali, are masterpieces. The cinematography by Josef Wirsching offer some of the most spectacular shots of the actress framed against the landscape and within the haveli. She captures the character’s predicament of a bird in a gilded cage with finesse, as the film tracks her dreams, desires, and disappointments, with acute sensitivity.

Talking about her role in the film, Vinod Mehta in his biography of the actress quotes her as saying, “For me to say is this: it is a performance to deliver which I have, as an actress, had to delve deeper into the secret wells of being than any actor or actress normally delves in the process of his or her professional work.”

Meena Kumari passed away on 31 March 1972. Lyricist and poet Sahir Ludhianvi commented on her life most eloquently, saying, “Her whole life was a sacrifice to her own emotions, her personality, her own ego and her sublimation in the art that gives joy to the millions. A cruel destiny put her lily-white soul on the cross of human emotion.”