The timeless film, first released in Tamil on 9 April 1948, was the most expensive Indian film of its time.

Released the year after India’s independence, Gemini Studios and SS Vasan’s Chandralekha (1948) is a classic for all ages. The Tamil entertainer, which first released on 9 April 1948, was widely marketed and paved the way for southern filmmakers to make their way to Mumbai and North India to show their films.

The passion project of SS Vasan’s begun in 1943 and took five years to finish. Initially TG Raghavachari was chosen as the director but Vasan took over to complete his production. Starring MK Radha, TR Rajkumari, Ranjan, and Sundari Bai, the story was one we’ve heard before. A bountiful kingdom, two warring brothers who happen to be princes, and a beautiful, intelligent village girl who they both fall for — it’s predictable what will happen, but how it unfolds on the screen is still entertaining, even 70 years later.

This epic saga was hailed ‘the most expensive Indian film of its time’ and it is easy to see why. The title credits boast of 100 Gemini boys and 500 Gemini girls, who were hired on a monthly salary, it is said. The film cost over Rs3 million [around Rs30 lakh at the time] and 500 prints were available for worldwide premiere to screen. 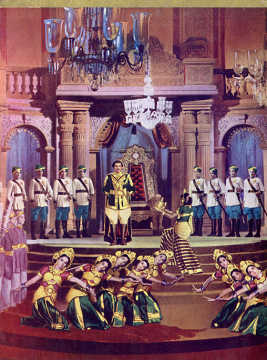 However, despite its success, the Tamil version of the film did not recover its high production costs. Vasan decided to have a Hindi version, re-shooting key portions with his artistes and released it on 24 December 1948. The Hindi dialogues of the film were written by Pandit Indra and Agha Jani Kashmiri. Pandit Indra shared the lyricist duties with Bharat Vyas for the Hindi songs.

Chandralekha's soundtrack was composed by S Rajeswara Rao who roped in singer Uma Devi to sing most of the film’s female solos. The singer who later gain fame as actress when she was rechristened Tun Tun and became known as a comedienne. MD Parthasarathy scored the background music.

The USP of the film is its strong, resourceful heroine Chandra (TR Rajkumari) who is no damsel in distress and holds her own through the film’s many deviations. The film takes slight, but lengthy detours to the circus and a gypsy camp, creating unnecessary song sequences. The sequence where lions and elephants are used for human amusement are not enjoyable to watch, although for audiences of its time it must have been a grand spectacle to enjoy on the big screen.

But the best is saved for last. A grand finale promises something never seen on screen — the most important set piece, the drum dance, which was originally directed by Raghavachari. The costly sequence would have funded an entire Tamil feature at the time.

The film’s booklet, released in 1948, showcases the hard work and extraordinary effort of the cast and crew at Gemini Studios. Calling Chandralekha “a saga of unremitting work, of unwinking vigil, and of meticulous regard”, the studio’s publicity material list some incredible facts from production which we’ve listed below.

1) In man-hours alone, Chadralekha had reached the almost unbelievable total of 2,259,770 hours of which the creation of the story alone has absorbed 129,600 hours.

2) All the sets were specially made of teak or rose-wood in order to create an atmosphere of unquestioned authenticity. One set in particular, Shashank's luxury chamber in the palace cost Rs75,000 to erect — the cost of one super bungalow for one hall. The space occupied by the various sets comes to 38 acres! Many of them measured about 400 feet in length and 60 feet in height.

3) The drum-dance that today keeps millions spellbound and thrilled and that has impressed Western ballet experts took two full years in rehearsals and 100 days of shooting. For low-angle shots against the clouded sky, the drums were raised 40 feet from the ground.

4) Two circuses [the Kamala Circus Company and Parasuram Lion Circus] camped for a month with their paraphernalia and menagerie with the studio compound. Thousands of spectators cheered and clapped their hands every night while their star-performers played their parts for the four cameras.

5) Sri Sekar, the art director, designed thousands of costume sketches, made his final selections and passed on the accepted ones to the 70 tailors in the wardrobe department.

6) Chandralekha has 19 changes of costumes ranging from the traditional sari to the sophisticated circus dress.

7) The number of miles travelled by car and rail to discover correct locations comes to 40,000 miles. A disused road, two miles in length in a wooden valley between two mountains was repaired and reconditioned in 12 hours by the Gemini sappers and miners for a caravan half a mile long to traverse.

The story of Chandralekha’s production ends with an apt question, “who else but Gemini can give the people such a gift?” Who else, indeed!