Preeti Simoes: Kapil Sharma is too good a person to go down like this


The troubled TV star’s former colleague and girlfriend said she hadn't received any legal notice, and expressed concern for his well-being.

Actor-comedian Kapil Sharma created ripples on Twitter last evening after posting a series of abusive tweets slamming an entertainment portal. He later claimed his account was hacked. However, today he admitted posting the tweets himself.

Sharma also posted a tweet saying a criminal complaint had been filed against the website, its editor, and Sharma's former colleagues, siblings Preeti and Neeti Simoes.

In his complaint, Sharma blamed them for causing him mental and emotional harassment. He said the website was running a smear campaign against him after he refused to pay it Rs25 lakh for a marketing campaign. Sharma has blamed the Simoes sisters for leaking information about his personal and professional life to the website.

Some people just want to defame you for few bucks but it will take ages to make a stand against the wrong.. I shall do it today n forever.. pic.twitter.com/Vg8bJoWwhF

In a telephone conversation with Vickey Lalwani, editor of entertainment website Spotboye.com, Sharma reportedly kept aside his dignity and abused him, even going to the extent of saying objectionable things about Lalwani's daughter.

Cinestaan.com spoke to Preeti Simoes, who said she had not received any legal notice or complaint. She further expressed concern for the well-being of her former colleague and boyfriend. Excerpts from the interview:

Kapil Sharma has tweeted about filing a mental harassment complaint against you. What's your reaction to that?

I haven’t received any complaint. Nor have I received any call from him. I guess it must be one of those tweets that he does. I don’t know whether he actually did it or forgot about it.

I just hope it's not him who had done this fiasco on Twitter. We have known Kapil for so many years, especially Neeti and me. Anyone who knows the two of us knows that we are extremely hard-working and have done everything in our capacity to build him and make him the brand that he was. Till the time we were there, I think he was at the peak of his career. Everything, after we left, has gone downhill.

Sharma has alleged that it is your sister and you who have been leaking information to Spotboye.

If he chooses us to blame us when we haven’t been part of his life for the last one year, then that’s a choice he has made. I have not read a single article of his which has personal information in it.

If he is considering ‘shoot cancellation’ [first in The Kapil Sharma Show and now in Family Time With Kapil] that has come out in the press or his fights with Sunil Grover on Twitter as personal information, then I don’t consider that personal information.

It’s not just his show that gets cancelled. There are about 150 people working on a show. The information, especially when Bollywood celebrities are involved, can be leaked by anyone. There is no way you can hide such stories.

I don’t know if Spotboye.com was using harsh language. You have to take certain things with a pinch of salt. If one gets offended, then the likes of Salman Khan, Akshay Kumar, they would never be able to work in life. These stars, too, get flak.

What I wonder is why his family and friends are not understanding that whether it is Vickey Lalwani or any journalist, they are just writing about him cancelling his shoot. If he [Lalwani] says he cancelled a shoot because he is depressed, then he [Sharma] needs to first figure out why he is depressed.

In the telephonic conversation, Sharma claimed that Vickey Lalwani wanted to extract Rs25 lakh from him. Since Sharma refused, the portal has allegedly been trying to malign him by writing negative stories. Were you privy to any such conversation between Kapil and Spotboye? 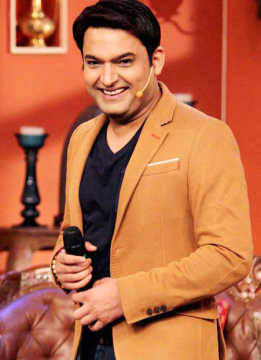 That is between Spotboye and him. Spotboye will have to prove their innocence. I have no clue about any such information.

I don’t know what is personal in this. How can you complain about someone leaking personal information when that person tells everything on Twitter? Pick up the phone and speak to them directly. Why are you barging [in on] them on Twitter?

Look, he is not well. He is not the man I have known for long. I heard the entire phone conversation yesterday. I think his friend who took over from him was worse than him. First, he was abusing the journalist, then you are taking over the phone and doing the same thing. The journalist is telling you that he is recording [the conversation] and why would you say such a thing?

From being a star on TV to his current state, did all this happen because Kapil Sharma's films flopped?

No, I think it started from the time when he started to cancel his show on The Kapil Sharma Show. I think he couldn’t adjust to the change that he brought on to himself. He brought in a new team, he brought that girl to Mumbai.

I’m sorry to interrupt, but which girl?

The girl whom he was getting married to. Some girl from Punjab, whom his mother chose for him. He has got all these people around him. These are the people who are taking care of his work after we left. In the [termination] notice, he wrote that Neeti and I didn’t do our work properly, and hence he got rid of us. I don’t know what work he was talking about, for he was at his peak when we were with him. I don’t see any reason why he would bring this up now.

I hope it is not him. I genuinely hope that it is just one of his people who are very insecure now. Today is the first day of our show, Dhan Dhana Dhan. It’s just perfect timing [by Sharma] to bring this up on this day. Now, our team is distracted.

Has he got rid of all members from the earlier team?

Yes, none of the old writers is there except one or two. All the earlier writers are with us. It’s just how it is. It was his choice. Nobody broke his team, he broke it himself.

Kapil was a nice, gentle soul, one of the happiest people to be around. Always smiling, always encouraging his team. That’s how we succeeded as a team. It was a magical place for everyone. There were good vibes. Now that it is not working, it is you who has to introspect.

You were in a relationship with him. What went wrong?

I don’t know. [Simoes refused to say any more.] The only message that I would like to put out now is that he is not mentally stable...

I’m worried about Kapil’s health. Whatever he has done, I am not going to take that seriously. My only message to Kapil is to take care of his health first. My request to his family, especially his mother, his sister is that your brother needs help. You have put him in the wrong hands, who do not know how to handle him. He is going downhill. He is too beautiful a person for you to let him go down like this. Kapil needs to go to a really good doctor who knows how to handle him.