The makers also shared the first look of Anupam Kher, who plays the role of India’s former prime minister Manmohan Singh, from the film.

Makers of the biopic The Accidental Prime Minister have shared the first look of Anupam Kher, who plays the role of India’s former prime minister Manmohan Singh, from the film. Directed by Vijay Gutte, the film is adapted from Sanjaya Baru's book of the same name.

As visible from the image, the actor's makeup is so perfect that it is difficult to identify him in the poster.

In an official statement, the makers have also revealed that the film will be released on 21 December. 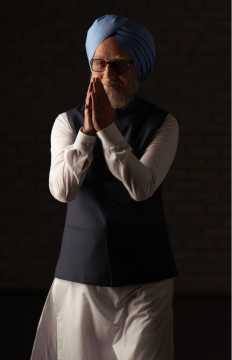 This means that it will clash with Aanand L Rai's Zero, starring Shah Rukh Khan, at the box office. Zero will have Khan play a dwarf for the first time in his career.

The film was mired in controversy soon after it was announced last year. The then Central Board of Film Certification chief Pahlaj Nihalani had demanded that the makers get an NOC (No Objection Certificate) from Manmohan Singh and Congress party president Rahul Gandhi before the film is cleared for release.