Today, you have to go begging to the audiences: Rishi Kapoor on film promotions


The actor strictly believes that no amount of promotions will work if your content is bad.

In his heydays, Rishi Kapoor was the quintessential romantic hero. Now at 65, Kapoor has forged a new identity for himself as a character artiste. Who would have thought that the man, who started off as the teenaged chocolate boy in Bobby (1973), would one day go on to play an intimidating pimp in Agneepath (2012)?

In addition to redefining his career, the veteran actor has been loved and hated in equal parts for his forthright views on social media. The man calls a spade a spade, and doesn’t even spare his son. Over the years, Kapoor has come across as an intimidating, fearless character. He says that has been the case from an early age and carries the same attitude during his interactions with the media.

Kapoor will soon be seen in Umesh Shukla’s 102 Not Out, where he reunites with Amitabh Bachchan after 27 long years. The actor made it clear that at 65 it was impossible for him to keep repeating the same stuff again and again, and hence he preferred to converse in a group. Over the course of the next 40 minutes with four mediapersons, Kapoor answered a few queries, ducked a few, dismissing some with disdain.

In the conversation, Kapoor said he had no problem working with Bachchan after many years, is not too fond of the modern way of filming and does not want to infere in his son Ranbir's career. 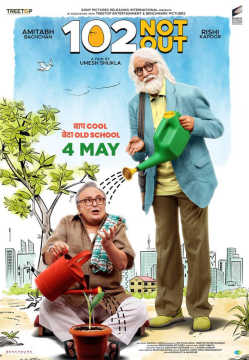 In a world that is obsessed with youth, it is refreshing to see a film where the two leading characters are over 70 years old. Bachchan’s character is 102, and yours is 75.

I’m  happy that today these kind of films are being welcomed. Hindi cinema is very youth-oriented. That image is breaking. Indian audiences also are improving. With the advent of multiplexes, where tickets are highly priced, compared to the single screen audiences, where tickets would be priced Rs60-70. Their sensibilities will never match. A Bajrangi Bhaijaan (2015), Dangal (2016) would work everywhere, but most content-oriented films will only work in a multiplex. The multiplex audiences only want to see good films.

Besides, our films are now doing well overseas. I was in New York 10 days ago. I went to a multiplex that was playing four Indian films — there was Blackmail, Baaghi 2, Subedar Joginder Singh and there was one Telugu film [probably referring to Bharat Ane Nenu]. You can’t make a crap film like we did in the 1970s.

It’s been 27 years since you last worked with Amitabh Bachchan, in Ajooba (1991). What’s it been like working with him again?

We haven’t worked together for so long. It’s like you haven’t rode a cycle for many years. And then when you do, it doesn’t take long to get the balance right. We knew that jahan kadi tuti thi, who wahi aake jud gayi [the link joins where it was broken]. There was no problem, nothing at all.

You made a name for yourself as a romantic hero. The late 1980s saw the three Khans emerge. Do you recall the moment when you decided to step back and perhaps, do different cinema?

That’s why I gave up. I worked as a romantic hero for the first 25 years of my life. The first was Bobby (1973), and the last film was Karobaar (2000). I had started to put on weight, I wasn’t getting roles. I was only wearing sweaters, singing songs, I was making money, but I wasn’t doing any good work. My wife Neetu Singh told me that if you are getting bored, then you should take a break. The emerging Khans became better choices for romantic films than me. I voluntarily returned the money to the producers [films that he signed but opted out of]. Issey pehle public mujhe joote maarke, publicly bezati karke niklade [before they insult and kick me out], I realised I had to take a break and then work as a character actor. You should go out with grace.

The 'Badumbaaa' song has been received quite positively. Along with Bachchan, you, too have sung it. How was that experience?

Amitabh composed and crooned the track. It's my character who is crooning.  Is it sung in the right tone is immaterial, all that doesn’t matter. I’m not competing with Arijit Singh.

When times are changing, the media has also changed. Have you made peace with the way they ask questions or the way interviews are conducted?

In our times, just one page in Screen (defunct publication) informing about the release date of a film was enough. Today, you have to go begging to the audiences to see your film. I believe, some very popular actor started this by going to popular places. Then it became a ritual. Then the media took it as a boon. All the TV companies have followed suit. However, a film will never work because of [only] promotions.

I remember a good anecdote when Mr Shashi Kapoor was being conferred with the Dadsaheb Phalke award in Prithvi Theatre. Amitabh Bachcan and I were talking, when [son] Ranbir just entered. Amit Ji asked him why so late? Ranbir said he had been promoting the film, Bombay Velvet (2015). Bachchan told us in current times his films don’t have the big budgets. His film Piku (2015) didn’t have the [marketing] budget, but the picture was super hit. We all concluded that a film doesn’t click because of promotions. Piku was hardly promoted, but it was a super hit. What happened to Bombay Velvet? It tanked.  We have a small film in 102 Not Out, but we’ve had the impact because people liked the trailer. How did that Sweety Ki Tuti fruity film, [Sonu Ke Titu Ki Sweety] promote themselves? Nothing, yet it was a super hit film. Just because you have big budget, a big star, it doesn’t mean you have to keep promoting the film.

Are the big budgets of films also putting an additional burden on the actor?

That is the stupidity of the producer. The producer should know how he/she should market a product. If your product only is bad, how can you do it? Ghode pe utna waan rakho, jitna woh bhaag sakey. How is an actor responsible for that? An actor can only get an audience to a theatre, the rest is all up to your content.

As a seasoned actor, does it get difficult sometimes to take instructions from younger directors? I believe you had your disagreements with Shakun Batra during Kapoor & Sons (2016).

I had a little problem with him, but ultimately we made the film. It just wasn’t the creative side, I was also disputing his craft, the way he was working. Similarly, Bachchan sir was also telling me throughout this picture that it is becoming very difficult... may be we are old school. I don’t understand why they make us do the same things again and again from different angles. Thereby you kill the actor and make him mechanical. Spontaneity goes away if you keep doing it again and again. Amit ji also said the same thing to me. I had apologised to Shakun Batra.

Today, the way of filming has changed. There is no film (prints), everything is digital. You are saving cost. It’s becoming taxing for all actors to shoot from different angles. They [directors] select from it at the editing table. Earlier, the director had an edit pattern in his mind. Today, directors have become lazy. I come from the school of thought, that I cannot create the same emotion again and again, I want to know which is the money shot. Most directors don’t know that.

You often say this inspirational line, 'Don’t let success get to your head and failures to your heart'. Ranbir Kapoor has had a tough time in the last few years...

You have been vocal that if you were his manager you wouldn’t allow him to do a particular film.

I cannot interfere in his career. I’m his father, not his manager. Nor does he want me do it nor do I want do it. If I had my way, then I wouldn’t have ever let him do a Barfi! (2012). I had told him why are you keen to play a hero who is deaf and mute. When the film was under construction, people told that what is your son doing? He is killing his own career. He proved all of us wrong. That was his conviction. How many people can risk their careers with a film like Barfi!?

10 years of Ranbir Kapoor: The dichotomy of stardom and acting

It’s said that the second innings of your career is perhaps your best phase. Do you agree?

Why just me? This is a great phase for Indian cinema too. I want to play characters. My look is different in every film now [shows his two vastly different looks from the film Mulq and then from Rajma Chawal]. This is the same man who is there in Mulq. I’m enjoying this period. I always wanted this. As child, we sneaked into make up rooms, we drew moustaches out of the make-up pencil. That dream is now getting fulfilled.