For her 65th birthday, we look at some of Chatterjee’s important film roles from Hindi and Bengali cinema.

Born Indira Chatterjee on 26 April 1953, Moushumi Chatterjee found fame at an early age. She was cast in Balika Badhu (1967) when she was just a teenager. Thankfully, she managed to translate that early break into a long career, acting across Indian cinema in different languages.

From a young child bride in Balika Badhu to a married older woman who wants to see everyone paired up in Piku (2015), the actress has had quite a filmi journey.

Here, then, are some of Moushumi Chatterjee's important roles over the years in Hindi and Bengali cinema. 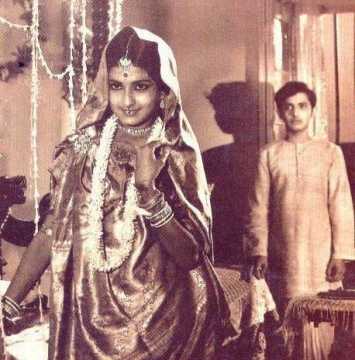 Moushumi Chatterjee was just entering her teens when she became a household name with the Bengali film Balika Badhu, directed by Tarun Majumdar. The young fifth- standard student played a child bride in the period drama, which became a platinum jubilee hit with a run of 75 weeks at the box office. The Bengal Film Journalists’ Association (BFJA) voted her Best Actress for her debut.

Despite her early success, Moushumi Chatterjee then took a break and finished her studies before signing any more films. However, she did become a young bride in real life when she married Jayanta Kumar, son of singer-composer Hemant Kumar, who, incidentally, had composed the music for her first film.

After Balika Badhu (1967), Moushumi Chatterjee made her debut in Hindi films with Anuraag (1972). Produced and directed by Shakti Samanta, the film went on to celebrate a silver jubilee. Rajesh Khanna, who encouraged Samanta to make the film, also made a special appearance in it.

Chatterjee played a blind young woman, Shivani, who wants to learn sculpting. She meets the kind family of Rai Saheb (Ashok Kumar) whose grandson (Master Satyajeet) becomes her friend. Later, a young man Rajesh (Vinod Mehra) wants to marry her. Due to her blindness, their match is rejected, until fate steps and Shivani undergoes a corneal transplant.

Chatterjee won the Filmfare award for Best Actress for her performance in Anuraag, a film in which she won audiences over with her rawness and naivete on screen, just like in her first movie, Balika Badhu. 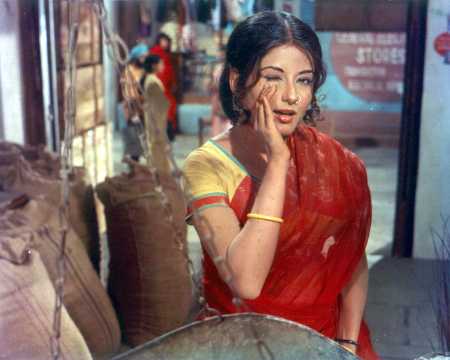 In Manoj Kumar’s multi-starrer, Moushumi Chatterjee played a young woman, Tulsi, whom Manoj Kumar’s Bharat rescues from a gang of hooligans. The actress had a difficult scene in the film where the goons attempt to rape her. The film also featured Amitabh Bachchan, Shashi Kapoor and Zeenat Aman.

Chatterjee described the incident in an interview with the news portal rediff.com, saying it was a tough scene to shoot as she was pregnant with her first child at the time. “I had long hair and in the scene a lot of flour falls on my head and body. I started sweating and everything just stuck to my hair. I started crying. After I came home at 10:30 pm, till 2 am, my maid was removing the flour from my hair. I had to shoot again the next day. I was pregnant at the time and when the flour went into my mouth, I vomited. I was physically unwell and tense about how the scene would be shot. But [director] Manoj Kumar took good care of me,” she recalled.

Shakti Samanta cast Moushumi Chatterjee as the second lead in Anand Ashram (1977), a multi-generational film starring Ashok Kumar, Uttam Kumar and Sharmila Tagore. Ashok Kumar and Uttam Kumar played father and son, respectively, who don’t see eye to eye when the son falls for a woman not of his father’s choosing.

Uttam Kumar’s Deepak marries Asha (Tagore) nevertheless and is left with a young son when she dies in childbirth. The child grows up to become a doctor without knowing his father or grandfather.

Chatterjee was paired opposite Rakesh Roshan in the film and got to show her playful, comedic side as her interactions with the young star were mostly lighter.

After Roti Kapada Aur Makaan (1974) and Benaam (1974), Amitabh Bachchan and Moushumi Chatterjee came together again in Basu Chatterjee’s Manzil (1979). In the film, Bachchan played Ajay, an aspiring businessman, who meets Aruna (Chatterjee), a rich man’s daughter, and falls in love with her. She, too, reciprocates his feelings.

Ajay pretends to be a rich man to impress Aruna but falls deeper into debt with his own business. Aruna’s father drags him to court for fraud where he has to rise above his circumstances. While it wasn’t a quintessential Basu Chatterjee film, both Bachchan and Moushumi were cast perfectly against each other.

The film had wonderful music by RD Burman, including two pleasing renditions of the song ‘Rimjhim Gire Saawan’ sung by Kishore Kumar and Lata Mangeshkar.

The Bengali film was based on George Bernard Shaw’s 1913 play Pygmalion and the Hollywood film My Fair Lady (1964) starring Audrey Hepburn and Rex Harrison. Bengali film legendUttam Kumar, who died during the shooting of this film, stepped into Harrison's role of Professor Higgins as Professor Gagan Sen while Chatterjee was perfectly cast as Savitri, Pygmalion's Eliza Doolittle, a rough-around-the-edges young woman who has to be turned into the perfect lady.

As the girl from the streets who has to be polished and taught to behave well, Chatterjee excelled in yet another comedic performance. The film had hit music composed by Bappi Lahiri and Kishore Kumar sang for Uttam Kumar one last time.

In Gulzar’s take on William Shakespeare’s play The Comedy Of Errors, Moushumi Chatterjee got the chance to hone her comedic skills and timing opposite Sanjeev Kumar, Deven Varma, Utpal Dutt, Aruna Irani and Deepti Naval. The film is hailed by comedy buffs even today as a gem and the entire cast contributed ably to the crazy antics on screen when two sets of twins create chaos for their families and friends.

Chatterjee played Sudha, wife to Sanjeev Kumar’s Ashok. She meets his well-behaved twin, also named Ashok, and mistakes him for her husband. Sudha tries her best to win him over, and gives into her husband’s demands, much to the merriment of the audience. As the clueless wife, she hit every note right.

Amidst all the comedies, there were a few dramatic roles that stood out as well, like this tearjerker from 1994. Moushumi Chatterjee teamed up again with her Swarg Narak (1978) co-star Jeetendra for the dramatic film directed by KV Raju, but this time, the pair were cast as grandparents. Their granddaughter in the film, Sita (Kajol), comes all the way from the US to reconnect with her family after her grandfather sent her parents away.

While Jeetendra’s Sitaram rebuffs her, his wife Janki (Chatterjee) has missed a family connection. However, it all comes at a price. The three artistes have intense emotional scenes and all of them performed them seamlessly in this remake of the Telugu film, Seetharamaiah Gari Manavaralu (1991). It is remembered today as Kajol’s early breakthrough dramatic performance.

The horror comedy Goynar Baksho (2013), directed by Aparna Sen, involved three generations of women with a priceless box of jewels that links them together. The film starred Moushumi Chatterjee, Sen’s daughter Konkona Sensharma and Srabanti Chatterjee.

Delightfully, Chatterjee played a ghost in this comedy, as the miserly but tough Rashmoni aka Buri Pishima, barely recognizable in short hairdo and white sari. Buri Pishima keeps an eye on her kin from the afterlife, making sure her precious jewels, the only thing of value she could salvage from Partition, remain safe. She won a Filmfare East award for Best Supporting Actress for the part, while Sensharma won Best Actress.

Over lots of Bengali food, arguments and talk of medical ailments, the meddling Chhobi Mashi always thinks she knows best. Before Piku, the actress was seen in the Hindi film Zindaggi Rocks (2006). Seeing her again as a feisty relative (which seemed right up her alley) was somehow fitting.