Hindi cinema's growing obsession with the past


Karan Johar's upcoming production, Kalank, is only the latest entrant in a growing line-up of Hindi films that delve into India's past.

The heart's memory eliminates the bad and magnifies the good, and that thanks to this artifice we manage to endure the burden of the past," said Nobel prize winner Gabriel Garcia Marquez. Over the last couple of years, Hindi cinema has embraced Marquez's quote with a wholeheartedness that is significant. Meghna Gulzar's Raazi (2018), Abhishek Varman's Kalank (2019), Reema Kagti's Gold (2018), Abhishek Sharma's Parmanu: The Story Of Pokhran (2018) and three films solely on the iconic battle of Saragarhi are among the many that promise this trend will continue.

While dramas and period epics have always been a part of the Hindi film industry, there is a certain volatility involved with historical period films. While Ashutosh Gowariker hit gold with Lagaan (2001) and later, Jodhaa Akbar (2003), his recent Mohenjo Daro (2016) was a debacle. Even Vishal Bhardwaj's name could not help rescue Rangoon (2017), and Jagga Jasoos (2017) cost Anurag Basu his relationship with the Kapoor clan.

This has not stopped filmmakers from latching on to stories that reach into the past events in India's history. As of today, there are seven films set in the past which are in line for release in 2018. While Meghna Gulzar's Raazi is based in the months before India's 1971 war with Pakistan, Akshay Kumar's Gold is set before India won its first hockey gold medal in the 1948 Olympics, while Aamir Khan goes right back to the 19th-century adventures of the Thuggee cult with Thugs Of Hindostan. Salman Khan, true to his overarching personality, is set to go through six stages of aging in Bharat which spans the period from 1940 to 2000s. 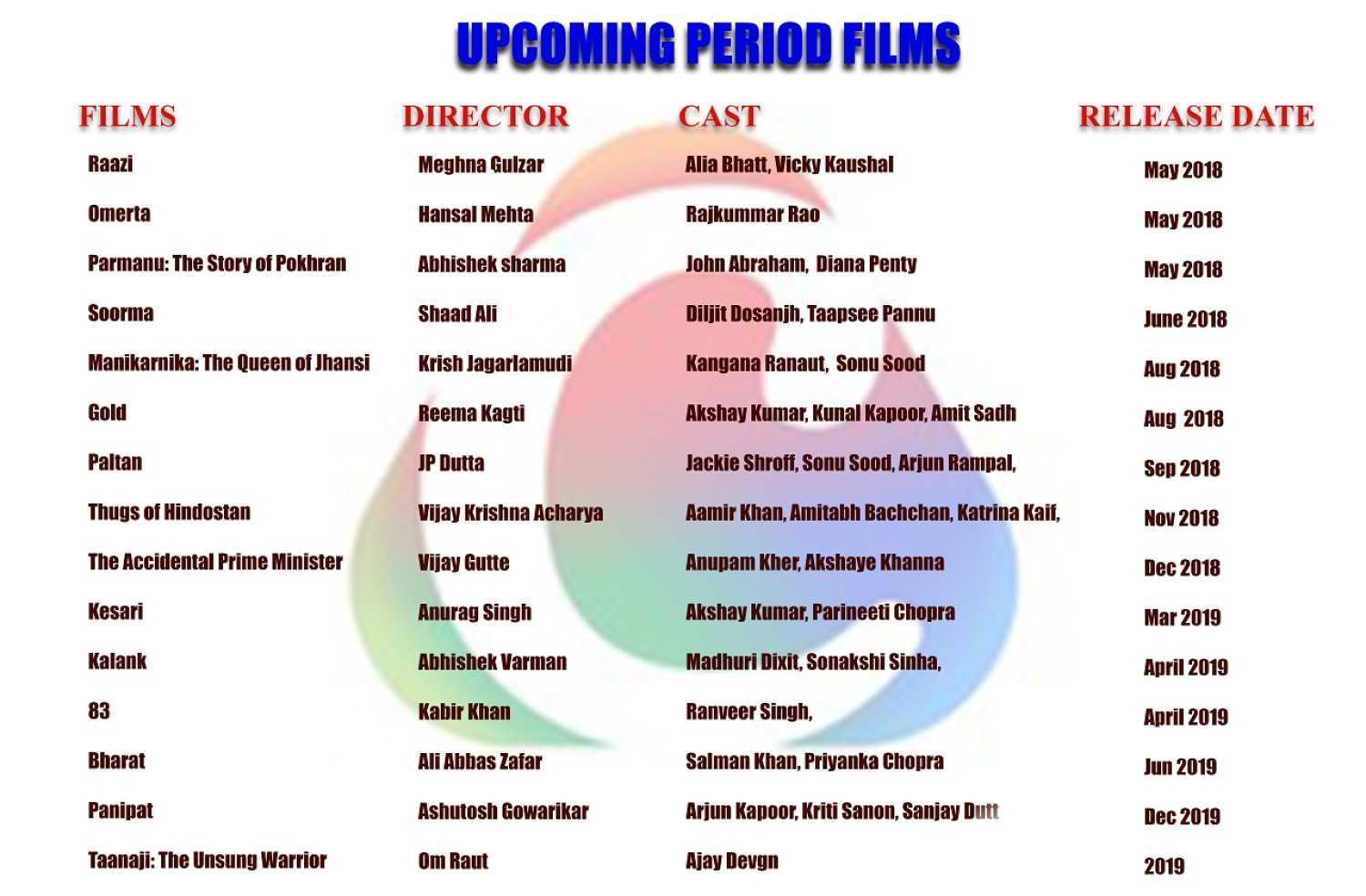 This interest in films set in the past was evident even in 2017. The year saw Raees, The Ghazi Attack, Phillauri, Indu Sarkar, Raag Desh, and Baadshaho test the waters with dramatic recreations set in the past. Some worked, some did not. Films like Tubelight, Haseena Parkar, Rangoon, and Begum Jaan are examples where the audience did not buy into the novelty of nostalgia.

In fact, some of the most successful and appreciated films of the year were set in the current era. From Bareilly Ki Barfi (2017), Newton (2017), Tumhari Sulu (2017) and Tiger Zinda Hai (2017), films dealt with issues and characters that were immensely relatable and contemporary.

Where 2018 differs is in the number of films that are banking on nostalgia to enhance their content. This is not without possibilities of success. Sanjay Leela Bhansali's Padmaavat (2018) is an example. The film, despite its seemingly never-ending controversy, managed to rake in Rs200 crore in its lifetime earnings. It was the highest earning film of the year, and among the first to reach this mark. Since then, Ajay Devgn-starrer Raid (another film set in the 1980s) has managed to turn up an impressive collection.

A part of the success can also be attributed to SS Rajamouli's Baahubali films (2016 and 2017). The epic fiction series delved into stories with roots in Indian mythology, history, and culture. Its success has probably spawned many more clones.

A period film is not without its USPs. Scale, nostalgic value, production design are some of the factors that go into ensuring the success of these films. However, these are dependent on heavy research.

Speaking to Scroll.in about her upcoming Raazi, director Gulzar said of the research, "that involved a lot of research which wasn’t easy to come by. Intelligence agencies will obviously not share their modus operandi with you. You have to pick things up from the conversations you’ve had with people in these agencies, use a little bit of your imagination and yes, keep it grounded in terms of certain contextual things, such as what could have been available technologically in 1971."

It is the 'imagination' part that often lands directors in trouble for stretching reality. The controversy over Bhansali's Padmaavat is a precedent to the importance of factual accuracy, real or imagined. Yet, the audience craves such creativity that makes them see a new world they only remember through memory.

A cursory look at themes will also reveal that several films revolve around subjects that deal with national pride. Akshay Kumar-starrer Kesari (2019), Ajay Devgn's upcoming Taanaji: The Unsung Warrior (2019), and Kangana Ranaut's Manikarnika: The Queen of Jhansi (2018) are examples. Even Raazi and JP Dutta's Paltan (2018) are subjects that occupy a similar space.

Even films that feature around sporting events seek to uplift the image of India as a country. 83, starring Ranveer Singh as Kapil Dev, will focus on India's iconic first victory in the cricket world cup. Diljit Dosanjh will mark his turn as hockey star, Sandeep Singh, in Shaad Ali's Soorma (2018), marking his iconic moment in the Sultan Azlan Shah Cup. Similarly, the controversial Parmanu: The Story Of Pokhran, set to be released next month, is set around India's triumphal nuclear test in the 1990s.

But to paint all films with the wide brush of optimistic, jingoistic nationalism would be wrong. The teaser of Raazi offers an example, it is more than a story about a patriotic young girl. It also goes through several complex human relationships that make it relatable. Karan Johar's ensemble cast production of Kalank is set in the 1940s and inevitably will deal with the painful memories of India's Partition.

Another factor that has drawn attention to these period films is the willingness of stars to be a part of such projects. While Aamir Khan (Thugs Of Hindostan), Ranveer Singh (Bajirao Mastani, Padmaavat, 83) and Devgn (Raid, Taanaji) were the usual suspects, a number of actors from the younger generation are also choosing to be a part of period epics. Arjun Kapoor has signed on his first historical with Gowariker, Panipat (2019) which will see him portray Sadashivrao Bhau, the Peshwa ruler who oversaw the Third Battle of Panipat. The hottest star of the current generation, Varun Dhawan, has also signed his first period drama with the Johar's Dharma Productions, Kalank. It marks an experimental phase for the actor, whose October (2018) is already earning critical acclaim.

The major indicator of the industry's growing enthusiasm for period films is Aamir Khan. A smart and savvy actor, he has often set the trend in terms of film choices. As of today, Aamir is part of Thugs Of Hindostan (which is set in the 19th century), and is also in talks to play late music baron Gulshan Kumar, in a film that will likely be set in the 1970s and 1980s decade. In addition, the actor is also reportedly planning a film on the epic, Mahabharata. In addition, the actor has also been reportedly approached by Shakun Batra for a web-series on the controversial guru, Osho Rajneesh.

For an actor who hardly makes any moves unless he is absolutely sure, this signifies a huge point.