The great singing star, born on this day (22 April) in 1916, started acting in silent films when she was barely 10 as she could not bear to see her mother struggle as a domestic help.

Indian cinema's first female star Kanan Bala, later to be popular as Kanan Devi, is considered a legend not only for her comprehensive contribution to Indian cinema as a singing actress and producer but also for her remarkable journey from rags to riches.

Kanan Devi, a rare combination of enigmatic beauty, aristocratic appearance, multiple talents and mellifluous voice, reigned as one of the most successful cinema artistes across undivided India from the era of the silent films to the talkies.

Kanan Devi became successful in an age when women in entertainment were looked down upon by society. Many of her contemporaries like Devika Rani, Kamla Jharia, Sadhona Bose and Uma Shashi came from strong lineages and privileged backgrounds, or at least had godfathers to ensure their positions as artistes.

Kanan Bala had none of these advantages. While there are numerous accounts on her parentage, it is widely accepted that she and her mother had to work as domestic helps after Ratan Chandra Das, whom she called her father in her autobiography Sabare Ami Nami (I Pay My Respect to Everyone), died.

“I do not wish to invite heartache over the matter of my parentage; it is sufficient that I am introduced as Kanan,” she said in a bold statement.

As discussed by Mekhala Sengupta in her book Kanan Devi: The First Superstar of Indian Cinema, “Ratan Chandra fostered in young Kanan the ability to enjoy solitude and with picture books or thoughts, and encouraged her to listen to music.” 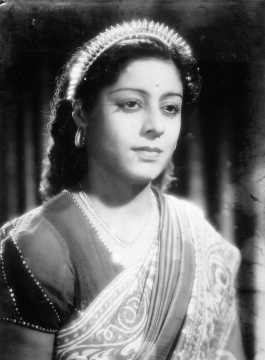 The actress wrote in her memoirs, “I was always a little different. I loved books and pored over them. It was inconsequential whether I comprehended the content. I would sit with any book to examine the letters, the characters, and see vivid images before me. After I learned to read fluently, I was lost in space and time.”

The actress could go to St Agnes School in Howrah only for a few days. She soon had to quit for lack of financial support. However, in that brief period, her imagination was fuelled to such an extent that when she engaged in playing with dolls, she used to act out stories and roles with toys, changing the sets and background again and again.

When her mother became the family's sole bread-earner, Kanan Bala was plunged into despair at her plight, as she was way more mature than her age. “It was around this time that our acquaintance, Sri Tulsi Bandopadhyay, brought a proposal for me to work in his film," she later wrote. "I used to call him Kakababu. He said to me, 'You have good looks. If you get the chance, bas! You don’t have to look back’!"

Though her mother and sisters were dead-set against her acting in films, Kanan Bala was determined to take a step to end their misery. She was scared beyond imagination on her first day at the sets, when one of the noted directors of the time, Jyotish Bandopadhyay, brought her at ease and assured her that she was going to be famous.

Thus, Kanan Bala’s career began with Madan Theatres as she appeared in her debut film Jaydeo (1926). She pondered, “For a nine- or 10-year-old girl, the terms ‘artiste’ or ‘art’ can be nothing but big words. One can say, instead, that the need to earn a living led an orphaned, helpless girl to cling to the one path she found, as a drowning man would to a straw, and tried to stand on her own feet. If later I developed any artistic skill it was due to many kind individuals. I can claim little credit for myself.”

Her performance as Radha in the film Jaydeo was appreciated and Kanan was signed on for a contract at Rs5 a month in Madan Theatres. As Sengupta writes in her book, “Her achievements speak volumes for the tenacity, determination and will power of a young girl.”

Kanan gradually appeared for Indian Cinema Arts Productions’ Shankaracharya (1927) and in Rishir Prem (1931) by Madan Theatres. By then Madan Theatres had brought the talkie to Calcutta and the same year Kanan Bala appeared in her first talkie Jore Barat (1931) which was released at the Crown cinema on 27 June.

Being exposed to the equipment and technology of the talkie was no less scary for the vulnerable young girl. “A life in which poverty and want were constant companions, in which the family had to be fed from the meagre earnings of film acting, the power of this machine seemed like a curse...” Her statement echoes the fact that the emergence of sound caused many stars of the silent era to lose their jobs.

Kanan felt relieved when she got to know that her job was safe and wondered at her fortune. “The advent of sound films or talkies, the technology wave of the 1930s, catapulted a select few like Kanan into the public eye as she smoothly made the transition from lip-synching to naturally articulated speech alongside intoxicating songs,” writes Sengupta.

The talkies exposed Kanan Bala’s unparalleled flair for singing. She trained under eminent musicians and singers like Raichand Boral, Pankaj Mullick, Kazi Nazrul Islam, and Bhismadeb Chatterjee. In 1932 she left Madan Theatres and joined Radha Films. After her performance as Bishnupriya in Sreegouranga (1933), she first saw success with Manmoyee Girls’ School (1935). Her success brought her the invitation to cut a record with the Gramophone Company, owner of the His Master's Voice label.

In 1935, Kanan left Radha Films and joined the prestigious New Theatres. She featured alongside the stalwarts of the era like Durgadas Banerjee, PC Barua, KL Saigal, and Pahari Sanyal under such fabled directors as Debaki Bose, JN Ghosh and Nitin Bose. She delivered one hit after the other, such as Bidyapati (1937), Mukti (1937), Street Singer (1938), Sapera (1939), Lagan (1941) and many more.

As films in those days were being made in two languages, her popularity reached the masses beyond boundaries and the circle of her connoisseurs grew to such an extent that her name became synonymous with New Theatres.

While climbing the ladder of success in this decade, Kanan Bala had to continuously fight to stay true to herself against male advances, jealousy and favouritism in the industry. Also, she continued to struggle with the fact that no matter how successful she was, she had no social recognition beyond celluloid.

Just as she played male roles as Narad in Madan Theatres' Prahlad (1931) and Kansa, Krishna and Narayan in Vishnu Maya (1932), she did the same in real life not only as a bread-winner but by organizing her own life until she married Ashok Maitra in 1939.

As discussed by Indranee Ghosh, the translator of Kanan Bala’s autobiography, "In absolute terms, Kanan Devi’s decision to marry might be seen as two steps back for women’s liberation from the tyranny of the kitchen and the nursery. However, in the particular context of her situation, taking this step was undeniably an act of rebellion to gain a rightful place in society.”

However, her marriage did not last long as her in-laws, staunch followers of the Brahmo Samaj, barred her from appearing in films. So Kanan Devi divorced Maitra in 1945 but maintained a relationship of mutual respect with his family ever after.

By this time, the enigmatic and commanding actress, who did not mind walking out of marriage when it came in the way of her profession, had left New Theatres and worked with MP Productions, delivering hits such as Jawab (1942), Ban Phool (1945) and Raj Laxmi (1945). She bagged the BFJA [Bengal Film Journalists Association] award for her performances in Nitin Bose’s Parichay (1942) and PC Barua’s Shesh Uttar (1942) not as an employee but as an independent artiste. This was the defining period of her career. From here on, she was known as Kanan Devi.

In 1947, Kanan Devi went abroad to acquaint herself with the Western world of cinema and met Hollywood legends like Clark Gable, Spencer Tracy, Robert Taylor and others. In 1949, she embarked on a new venture as a philanthropist and set up her own production house Shrimati Productions.

This new phase brought her both satisfaction and frustration. Kanan Devi entered production at a juncture in Indian cinema when directors were beginning to be at the mercy of the stars. At the same time, her collaboration with second husband Haridas Bhattacharya, who left his job as a naval officer and went into direction, brought them recognition, including the President's award and second rank at the National film awards for Andhare Alo (1957). The duo also shaped the careers of numerous future artistes such as Ajay Kar and Tarun Majumdar.

After acting in their native production Mejdidi (1950), Kanan Devi chose to lead a more reclusive life, immersing herself in spirituality and religious practice. She also founded the Mahila Shilpi Mahal as a platform for aspiring female artistes, keeping in mind her own days of struggle.

“Kanan’s transcendence over the darkness over her circumstances, within the canvas of the turbulent historic, economic, social and political milieu she lived in, is an incredible story,” reflects Sengupta. The embodiment of beauty, strength and artistic capabilities, Kanan Devi was awarded the Padma Shri in 1968 and the Dadasaheb Phalke award in 1976.