Writer Amborish Roychoudhury’s book, In a Cult of Their Own: Bollywood Beyond Box Office, discusses some cult films of Hindi cinema.

Film buff Amborish Roychoudhury, in his first book, decided to look at films which didn’t do well at the box office when they were released but have attained a fan following of their own since.

Roychoudhury, who has his own blog at amborish.com, delves into over 20 selected films in the book titled In a Cult of Their Own: Bollywood Beyond Box Office. Some are obvious candidates like Chashme Buddoor (1981), Shahenshah (1988) and Andaz Apna Apna (1994); others are not-so-obvious ones like Chameli Ki Shaadi (1986) and Andheri Raat Mein Diya Tere Haath Mein (1986).

In this excerpt from the book, Roychoudhury re-examines the filmmaker Raveekant Nagaich’s Surakksha (1979) starring Mithun Chakraborty. The actor played Agent Gopi aka Gunmaster G-9 in the seminal film which had a sequel with Wardat (1981). The author notes the many firsts we, the audience, forget the film is responsible for — from stunts to villains in dance numbers!

Take a look below to understand why there is no spy movie like Surakksha.

The 2015 film, Furious 7, of The Fast And The Furious franchise, had a breathtaking shot of cars leaping into the air out of a plane. As they are about to hit the ground, parachutes spring off the top of these cars and ensure a safe landing. Thirty-six years before this film, in Surakksha, Gunmaster G-9 flies off a cliff with his car, followed by his ill-fated chasers who fall straight down to their deaths. But G-9’s is no ordinary car – he pokes a button on the dashboard and out pops a parachute while 'Gunmaster G-9' plays in the background. 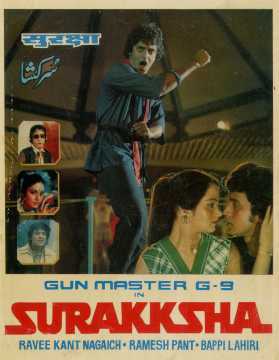 Ravikant Nagaich also seems to be the first filmmaker to introduce the concept of the super-villain, complete with a costume, hi-tech den and henchmen. These villains, more often than not, were played by eminent South Indian actors appearing in cameos. If Supremo from Farz was played by veteran Telugu actor Rajanala, Surakksha’s Doctor Shiva was portrayed by legendary actor-producer K Balaji. K Balaji methodically remade most of the Bollywood hits from the seventies in Tamil, including Deewaar, Don, Dushmun, Namak Haraam and Johny Mera Naam.

The film marked the debut of Tej Sapru (son of veteran character actor DK Sapru and one of Bollywood’s favourite henchmen alongside luminaries like Sharat Saxena, Goga Kapoor, Mohan Joshi, Dalip Tahil and the like). Sapru plays Jackson, an agent who has been captured by an ominous group of no-gooders called SSO that staged his death and secretly kept him in custody. G-9 rescues Jackson, who has lost the use of his legs due to torture. But does the disability render him out of action? No, Sir! G-9 improvises a special crutch for him, that can transform into a gun at a moment’s notice!

Bollywood has always dealt a bad hand to its villains. Besides getting trashed by the hero at the slightest opportunity, they are shamed by the heroine, and, above all, they rarely get to sing and dance! With the glaring exception of Amrish Puri singing time and again in Tehelka, Vishwatma, Tridev and Muskurahat, and Shakti Kapoor shaking a leg in films like Rocky and Dance Dance, villains have rarely been known to get entire playback songs and get to dance with an elaborate crew. (And here, I synonymize villains to screen baddies like Prem Chopra, Pran, Amjad Khan and their ilk — not heroes playing ‘negative roles’ like Shah Rukh Khan in Don, Ajay Devgn in Khakee, or Saif Ali Khan in Omkara.) But we know Surakksha is not your run-of-the-mill Bollywood fare. Jeevan, of all people, gets a qawwali face-off with G-9 in the song ‘Ye Duniya Hai Usiki’. He has no less than Manna Dey crooning for him, and Jeevan breaks into a jig with such abandon that for a while he seems to be giving our Prabhujee [Mithun Chakraborty] a run for his money!

And talking about firsts, what’s your earliest memory of a male Bollywood actor sporting a hairband on screen? Yeah, you got that right, a hairband. Well, circa 1979, Jeevan paved the way for Farhan Akhtar in Rock On!! in the aforementioned song. You don’t believe me? Check out the song.

Excerpted from In a Cult of Their Own by Amborish Roychoudhury with permission from Rupa Publications. The book is available on Amazon.in and Flipkart.com